No denial of vengence towards Dr Mahathir 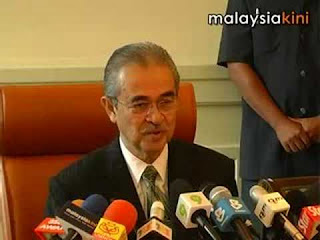 So it was not considered in our previous posting. One commentator used that to discredit us and claim we denied his right to give his side of the story.

This posting is about giving Pak Lah's side of the story. But, does his response make sense?

The Bernama report below:

Abdullah dismisses assumptions he conspired with opposition over book

KUALA LUMPUR, Aug 12 (Bernama) -- Former Prime Minister Tun Abdullah Ahmad today dismissed assumptions that he had conspired with the opposition to go against his own party, Umno, through the publication of the book "Awakening: The Abdullah Badawi Years in Malaysia".

"That is tantamount to twisting the facts and is slanderous. The criticisms given during the interview with me, as contained in the book, were made because I wish to see that Umno continues to have the people's mandate and trust.

"I have never left Umno and, God willing, when the time comes I will breathe my last in this world as an Umno member who loves his motherland," he said in a media statement.

Abdullah said it must be understood that he had neither written the book nor sponsored its publication.

He said he had been interviewed by two academicians, James Chin and Bridget Welsh, on the principle of openness for a balanced debate with regard to all points of view.

Abdullah explained that he was only associated with an interview in 2011, which was more inclined towards replying to questions raised by the writers who had contributed to the book and providing him with an opportunity to clarify several points inserted in the book.

"I did not sponsor or ask for the book to be published. It is the norm for academicians to make an analysis of our country's political history and, definitely, my era did not escape academic research.

"I only agreed to be interviewed so that my views and explanations can be carried in the book," he said.

Abdullah said he did not know of, was not informed about and was not responsible for any invitation to launch or discuss the book.

He said he had no plans to attend the launch of the book for it could be then assumed that he wrote it and sponsored its publication.

"The news that an opposition leader has been invited to launch the book in Singapore, even if it is true, is the decision of the publisher, not mine," he said.

It had been reported that Lembah Pantai MP Nurul Izzah, daughter of Opposition Leader Datuk Seri Anwar Ibrahim, would launch the book in Singapore on Aug 30


It is merely a deny, deny, deny ... statement. He could be denying by singing a Hindustani song .... nahi, nahi, nahi ... and still said nothing.

This is old school style of denial without any meat is not convincing. The questions remained:

The reason he will revenge is for criticising his administration and led Najib and Muhyiddin to honourably replace him. It means he does not believe he should be criticised and in the past, he will complain on Dr Mahathir for repeating the same issue despite him explaining his reasons.

It is as though we should accept and shut up upon hearing his ridiculous explanation. IT shows the man the opposition gave tribute for openness is himself not transparent and open.


Nevertheless Pak Lah has every right to give his side of the story and criticise Dr Mahathir, just like we had every right to criticise him then and now. We make no bone of making our view, opinion and speculation known and heard.

Were we not subjected to much oppression for expressing ur views during his time?

The commentator, Khairy and Lokman Nor Adam should not be sore with the fact that their plan to rubbish Dr Mahathir to prop up their group failed!

I couldn't agree more with you simply because Pak Lah has been known already as a very weak leader, weak PM and whose action by releasing Anwar leave the country is such a mess right now. He is not a visionary leader...

Firstly I thought he was being used by certain quarters... but now I dont think so...

Tun Abdullah should be subjected to UMNO disciplinary committee for the unjust acts of revealing information that relate to individual that effect party and its learderships be it direct or indirect. His actions is the same as the police officer,army general and other rank of officers and government servants that have left the services but join hand with the opposition to hit back on the government.As an ordinary 'orang melayu' and the rakyat of Malaysia that support the ruling government since began voting in 1982 I feel very dispointed with his actions and remarks.During his tenor as a PM not much achievement made as compared to TDM.The image of Mr Clean and Islam Hadari now showing its colour!

Najib should learn something from this episod. Kj like anwar will do anything to fulfill his master command.

When Dolah says 'motherland' he must be sending his message bcoz his mom is chinese.

it seems that many *loggers showed no denial of bengeace towards the awak-ke-ning, he he

As what Mama Gump has often said to his son Forrest;

"Stupid is as stupid does.."

Pak Lah is not even a leader. He got no vision at all. He works base on his emotional.

Well your article seemed to be so critical of Pak Lah involment in this new Book "The awakening......." I think he has every right to partake in any interview just like the past american president give speeches or interview in any television network.You may not agree with him but you cannot denied his right to express his opinion.Can we take this as differences of political expression.But in 2004 in General Election Barisan got the highest popular vote,then in 2008 not only BN lose popular vote but Bn loss 5 states including Federal territories.Why ? Certainly during that past years a lot of thing happened whether he knew it or fail to know.
His attack of mahathir legacy reflects his frustration from doing a good job,but certainly during his time a lot of stories come out during his premiership.The outcome is rakyat reject BN until today.
Well he is not suppose to be no 1,but due to political turbulence at that time,he was the chosen one by default.The god has decide to be that way.We proposed God dispose.Let us be kind enough for him,certainly Mahathir is not beyond mistake.Pak lah is as prime minister has been,Mahathir is also has been but Lee Kuan Yew is ...bin.These are merely historical evidence.

so who is supposedly the smart successor? Lim family? ptuiiiii!!!!

Melayus fighting each other.

and that include those currently in the same boat.

ya Melayu's fighting each now but not for long....remember that and NO way chinkies will rule Malaysia! ada paham ka?

Strange when a liberal Malay and a supporter of Pakatan Rakyat suddenly is very supportive of Pak Lah and Khairy , it shows that ANYTHING that is detrimental to UMNO is VERY POSITIVE to the opposition party. The weaker the UMNO leader the better for the opposition. That's why they despise Tun Dr Mahathir. Because TDM is a very strong leader under the weak and foolish Pak Lah.

Tun Dr Mahathir is a 'Firebrand' but wise character utmost needed now than ever in Tanah Melayu.

The list are too long to compare his achievements to Abdullah Badawi. Even in his retirement Tun M writes and churns out his wisdom.

Its the hallmark of a great leader that comes out from the Islamic fraternity after a very long time of dry spell.

LKY is a big fish in a small pond and he is a product of chinese previllege afforded by the colonial Brits. Dare even to come out with 'man's view of the world'? The guy is already senile and not accepting the fact that his 'social engineering' does not gel well with people except for his 'knuckle-duster' type of governing. He doesn't have the balls to really face-off 1 on 1 given the choice.

He hides behind his gurkhas, the 'mexicans', special protection services etc. Even bragged coming out from his grave if things doesn't go the way as his crooked formed view of humanity, a sign of denial imbecile.

Abdullah, am not a fan never will.

As layman only 2 things Tun Mahathir have erred ie. Taking in Anwar Ibrahim and passing the baton to Abdullah Badawi.

And many can easily forgive him for the choice he made simply because AI is Houdini and AB kind of David Blaine. Dressed and outlook of projected refracted image as man of religious conviction even Wan Azizah couldn't tell or would not tell.

So even if you are not a fan of Tun Mahathir you cannot deny the multitudes of accolades Malaysia has achieved from his effort and vision and unending love for his Tanah Melayu and orang melayu-muslim.

Having said all that put Tun Mahathir next to you and see where you are on par with him.

Am just a little guy trying to say "....you wouldn't want to parrot Nick A on comparing Rasulullah to mamat kampung....".

Muhammad s.a.w. is not a has been. Quran and Sunnah is and are still relevant till today.