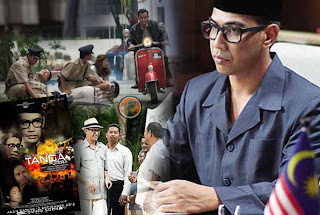 The Mole article today reads Chinese should watch Tanda Putera, don't be fooled by Tony Pua. which links to a Malay article on The Unspinners here.

There is a nice rhyming in that title between Putera and Pua.

Tony Pua was trying to act like a citizen concerned that the film Tanda Putera will raise inter-racial tension. He was never concerned when the Lim was provoking the Malays' sensitivity.

If he is concerned, why he didn't warned his fellow DAP members from trying to turn the recent police actions to address organised crime into a racial issue of Malay versus Indian?

Tony Pua and many others are trying hard to get the public to not attend the movie Tanda Putera as though their political fortune rests on it.

As Datin Paduka Shuhaimi Baba's message at the relaunching of the film, "don't comment till you've seen it." Quite sure Tony Pua have not seen it.


Lim Kit Siang, whose blog was on a roll in his criticism of the acquital of the two policemen in the Altantunya murder, suddenly went two postings in a row on Tanda Putera.

First, he tried to make a big deal over was Datin Paduka Shuhaimi Baba's statement that it is a fiction story based on history. Not an unusual practise in moviemaking to create a scene to emphasis on a certain point.

That spin was created by The Malaysian Insider's and Malaysiakini. They twisted Shumi's words that Tanda Putera was based on historical fact as background to Tanda Putera is based on fiction.

Shumi had also challenged both the portals to invite DAP supporters to see the film first. If both of them have no guts and transparency to say so, then we wish to highlight her request that DAP supporters and those who fear so much this film to please be brave and see it for themselves.

Looks like Kit Siang is not brave enough to accept this women's challenge because he had subsequently, repeated his previous concern before the general election on the pissing scene in which the urban legend in Kampong baru, Kuala Lumpur is that he is the person.

There are books that wrote about this pissing incident. It was an interesting scene to depict the animosity created by subversive elements that common people can be so rude to the elected leaders.

However, Shumi had taken necessary precaution as to not potray the perpatrator as Lim Kit Siang but was done by some mischievous boys. The scene was consequently shortened from the originally planned version as per the finding from of focus groups.

But, why is Lim Kit Siang worried over a fictional scene that does not mention his name?

He goes to the extend of describing it as "the height of criminal and anti-national irresponsibility for anyone to concoct the spurious urination incident as one of the purported causes provoking the May 13, 1969 riots, especially in a film funded with taxpayers’ money, when it is completely fictional with no factual basis in any historical material, whether documentation or photographic."

Unless he is guilty of actually doing it because it took him a long time to anwer an allegation by then Member of Parliament for Kulim Bandar Baru, Dato Zulkifli Nordin in the previous parliament, there is no reason for him to get paranoid. .

Don't overdo things la, Kit Siang. This is only a fictional movie, so why get upset?

The urination was not depicted as the cause of May 13, 1969 but merely as part of the provocation that arise from the anger incited by the actions of subversive elements that was at large within the Chinese community then.

Itu la ... as Shumi's message to everyone, "don't comment till you've seen it."

Then there is this message being spread by one Samc Chen from August 22nd, 2013. 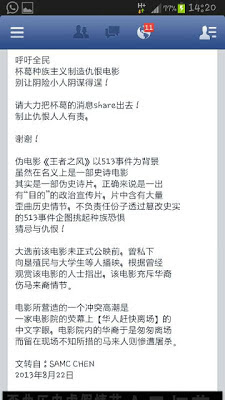 It is translated as:


I hereby urge all friends to join with us together to boycott the film Tanda Putera which is clearly promoting racist culture and creating hatred against a certain community.

Let us share together in our respective Wall (in Facebook) so that the whole community boycott this film,

Do not allow this film with racist intonation be watched and get public reception in order to avoid unrest in the community.

The film being given the film Tanda Putera is supposedly to boost the spirit of patriotism among the people. It is supposed to be based on history, but the history adopted was actually modified to meet the political interest of a certain party.

The backdrop of the film based on the 513 story was cunningly manipulated to change the real history of the country and lead to further hatred and racial unrest.

Prior to the last general election, the film was screened informally to community and university students. According to individuals who have watched the film, the Chinese supposedly started the bloody incidents of the Malay people.

One of the deadliest incidents alleged to have occurred was a scene in a cinema in which chinese writings appeared on the screen that reads "chinese people immediately leave the stage" and suddenly, the chinese people flocked to leave the stage. While the Malays, who do not understand the writing did not take a similar action, thus were brutally murdered in the theater.

This is also a case of nitpicking and not well rationalised arguments from someone who has not seen the movie but is built on the opinion of others.

If he had actually seen the film, he should realise that the film Tanda Putera was clear and concise in their potrayal of subversive elements, specifically the communist for inciting racial tension between Malays and Chinese.

To claim the film intention is to promote racial tension and disharmony, it shows immaturity and an intellectually challenged individual.

May 13 merely provide the backdrop to understand the big challenges the two great leaders Tun Abdul Razak and Tun Dr Ismail had to face while they themselves were facing personal challenges on their own illness.

The strong challenge being put up by these few people only shows the insecurity of these people to the fact that the truth will soon prevail and lies that have been promoted by the book May 13 as written by Dr Kua Kia Soong will end.

In his book, Dr Kua had sourced information from fiction and rumors by foreign journalists and  diplomats.

The fact to the matter as highlighted in this film advised by former Inspector general of Police, Tun Hanif Omar and son of Tun Dr Ismail, Tawfik Ismail is that the foreigners were confined to their homes and hotel rooms, thus impossible to get any information on any May 13 incidents.

In one scene, foreign diplomats were hammered by Tun Dr Ismail for spreading information that don't tally.

The cinema massacre or any other major scene would not have been depicted if it is not true or there is no record of such event mentioned.

So just stop making a fool of themselves, don't comment before you've seen it. Tanda Putera will begin public screening at a theatre near you from August 29th onward.

FOR ONLY RM15!
BACK-TO-BACK!
MALAY CHAUVINISTS & CHINESE COMMIES!
YOU WOULDN'T WANNA MISS THIS!

Now Everyone Can Rewrite History...From Authors to Film Producers. What happened to Malaysian Historians? Is there such a Profession in this Country?

And if there are historians no one wants to refer to them because their story doesn't satisfy all quarters?

No wonder all and sundry are claiming their history is the right one!

I have not been to a cinema for ages.. i think more than 20 years. But for this Tanda Putra, I will make an exception...

Why ask others to see?

A dog pissing on the flag pole in Kg Baru did happen too.

are you a hypocrite? you attacked the book "awakening" without reading it.
should you not read it first like what you are telling others to see the movie first?
why did you attack the book when you not even read it?

History can have slight differences in the details but not on the main story line and occurence.

History cannot be based on questionable source like foreign reporters and diplomats whose got no access to news and information of events and is basically based on heresay because they are under curfew like everyone else.

I did not attack the content of the book yet but exposing the game that is being played.

I think to counter this movie is one that Namewee quickly produce with urinating and all ...waiting to hear comments from oppos..

Not planning to see it at the cinema. I'll just wait for it to be shown on TV during next Hari Raya celebration.

I don't need to see the movie to know that the Chinese started the 1969 riot. Don't care whether they were communist, PAP/DAP ilk, LKS or whatever. It is irrelevant to me.

Cina in 1969 and in 2013 sama saje. So loud and rude. Besar kepala too for their small victory in GE. No wonder Melayu hilang sabar and fought back when provoked. It is a myth that Melayu have bottomless patience you know.

A picture is worth a thousand words. The Opposition can produce their Singaporean directed version of Tanda Putera 2.0. This is a free country !

Eventually, you can find everything on Google, But I found this superb article regarding lawyers and litigaion services in singapore. Thank you so much for it.