Whose feeling the heat? 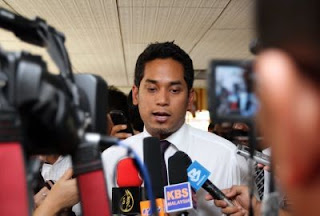 That was what Bridget Welsh said and Rocky commented here that her excuse does not jive. She use the excuse that the book is being overly politicised but attempted to politicise the book by having Nurul Izzah launch the book on August 30th in Singapore.

That event is not postphoned. Only postphoned is the Malaysian launch on August 16th which was supposedly to be attended by Abdullah and Tun Musa.

Is somebody feeling the heat from the controversies the book has generated so far?

Definitely, somebody is feeling the heat but not saying anything.

Tun Dr Mahathir decided not to say anything but trust the old man to be cool in any circumstances, even as big as a major financial crisis and yet came out scot free.

Yet the two probable accomplice do not look cool. 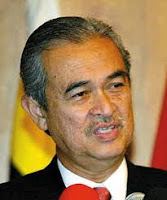 Abdullah remain with his elegant silence self. By right, he should speak out because the editor of the book claimed they had met him for an interview. 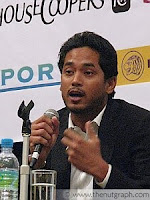 Khairy Jamaluddin avoided to comment but had "terlepas cakap" (accidently spoke) to say Abdullah requested the book be launched after general election. Maybe it was spinning by Malaysiakini but there has not been any denial coming.

In Malaysian politics, silence does not mean no. It is usually interpreted as covering up for a sense of guilt from an action made. Until Abdullah and Khairy explained logically, the public will assume they were involved or consented to the book publication.

There is no more such thing as ignoring an issue.

When PMO media team shoose to keep quiet on the issues of submarine, Altantunya and Rosmah, the issues did not quiet down but became difficult to debunk later.

Trust the media to keep harping on them or there is some sinister conspiracy going on by the media.

It does not matter whether the PMO's media team are distinguish or half baked journalists but they sure are living in the dark ages on matters of media propaganda to think of quiet down as strategy.

Maybe Abdullah and Khairy just realised the mistake that any form of collaboration with SUARAM or SUARAM linked publisher will be detrimental to Khairy's political career, thus Bridget was requested to postphone.


At least, that is a plausible explanation for Bridget's decision to postphone. 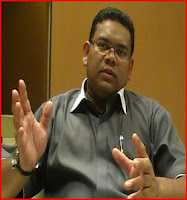 But what about statement made by aspiring candidate for Deputy UMNO Youth Chief, Lokman Noor Adam?

He pass an SMS statement below:

One wonders on the locus standi of Lokman Nor Adam to make such statement. During Pak Lah's days in office, he was known to be aligned to Khairy and a fervent defender of Pak Lah. He was seldom labelled as Khairy's boys.

There can only one possible reason that gives him some credibility to his statement. He could be in the family of Pak Lah.
The only possibility left is that he is married to one or both of Tun Jeanne's daughter with her ex-husband, late Tun Endon Mahmood's younger brother and Pak Lah's former brother-in-law, Osman Mahmod.

But Lokman is already married with quite a few children.

AS LONG AS ANY book DOESN'T TOUCH CURRENT ADMINISTRATION, IT should be construed as something done in good faith.

If LKY can comments on the currents affairs of its neighbor state therefore locals should not quickly jump the gun at a statesman who simply recalling what was going on during the era.

KJ as always is too confident of himself and has jump the gun as usual. The moment he was appointed a 'junior minister' he starts shooting his mouth off. It is a known fact that Pak Lah thinks the world of his obnoxious SIL and will do anything that KJ command. So this is another example of how stupid and dumb Pak Lah can be. And also shows how arrogant KJ can be.

I hope UMNO members will not give him any votes either as Pemuda Chief or MT members or VP. He wings should be clipped and he should be kick into the dungeon.

The book is all about kj future.

As for lokman he is in as Razali is link to Najib.... Being hisham boys.

And lokman depend on kj for his talian hayat in umno.

Are you blind that you cannot read or simply love to twist facts.
Hasn't Pak Lah responded already? That he has nothing to do with the book except the interview? That the interview was done in 2011 to clear allegations thrown against him. Doesn't he have the right to answer his side of the story?