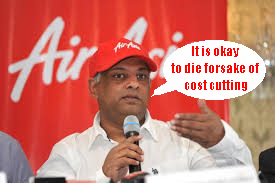 Spending too much time on the general election, we must have missed some news on Air Asia.

In many previous postings [read here], we've discussed of Tony F's plan to have a publicly listed Air Asia subsidiary in every country in Asia and possibly Europe. It raised our concern before that it could start a contagion effect on the financial market of the region.

Airline operation requires heavy funding. For fear, the European and American market will close up on Air Asia's funding for many issues on their operations including safety, Tony F went for the regional bourses.

It could serve to by-pass local regulatory restrictions and a useful "arm twisting" as he threatened to move to Indonesia.

Only thing was his takeover of Batavia Air was aborted and the Indonesian grass is not as green as he thought any grass on the other side should be. He scraped through Thai listing but had to pullout of Japan. But, we weren't aware that Tony F bought Zest Airways.

Since one of Tony's troll wants to play cheap diversion game on the issue of safety on Air Asia, he is a special posting. Other issues will have to be on standby. 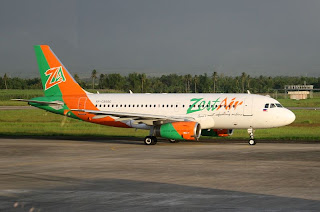 The airline that claim in their slogan as "Asia's most refreshing new airline" is only an airline with a fleet of 15 and under order 31 new aircrafts. The background of Zest is as per the extract from Wikipedia here, below:


Zest Airways was established as Asian Spirit in September 1995 by three friends: Antonio "Toti" Turalba, Emmanuel "Noel" Oñate and Archibald Po, who contributed $1 million each to start up the Airline Employees Cooperative (AEC).

They invited 36 of their friends, mostly former Philippine Airlines employees, to run Asian Spirit through a salary-to-equity swap deal. The Po family held the majority of ownership.[2][3][4]

It started operations in April 1996 with two second hand Dash 7 aircraft servicing only one scheduled commercial route with two flights per day from Manila to Malay, serving the fledging resort island of Boracay.

To maximize its aircraft utilization, it introduced new routes to the present-day towns of San Jose, Virac, Daet and Alcantara, and the cities of Cauayan and Masbate, regarded as secondary and tertiary routes by Air Transportation Office, and are not serviced by major airlines. 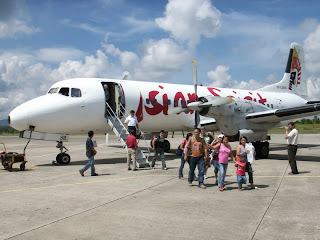 In 1997, the cooperative changed to a corporate set-up with the establishment of Asian Spirit, Inc., whose registration was approved by the Securities and Exchange Commission in 2005.

At the time, Asian Spirit has the distinction of being the first scheduled airline to serve Boracay. Other operators served the airport on a charter basis then. It became the Philippines' fourth flag carrier (after Philippine Airlines, Cebu Pacific and Air Philippines) in 2003.

Asian Spirit was sold to AMY Holdings, a holding company controlled by businessman Alfredo M. Yao, in March 2008.[5] After the success of the takeover, Yao expressed interest in merging Asian Spirit with South East Asian Airlines (SEAIR). The two airlines have been in merger talks and were expected to make a decision soon.[6]

Yao was supposed to purchase a sixty percent stake in SEAIR,[7] although the deal fell through because of a stolid response from SEAIR management.[8] The merger talks failed and both airlines continued to operate independently. 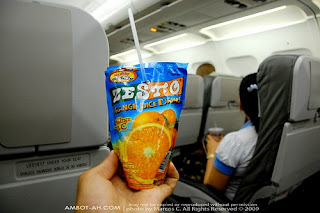 On September 30, 2008, Asian Spirit officially announced that it will be re-branding itself as Zest Airways. Reports say the name switch reflects the Yao's stake in the company, as well as an allusion to the flagship business of AMY Holdings: juicemaker Zest-O. The firm's board approved the name change in August, while the Civil Aeronautics Board approved the switch earlier this month.[9]

The airline wants to fly to three international points to Sandakan (- already stopped), Malaysia from Zamboanga, to Seoul from Kalibo, Laoag, and Davao, and Macau from Angeles City. However these international routings never took off.[10]

It has also intended to commence international expansion to Bangkok and Singapore from Manila in 2009.[11] 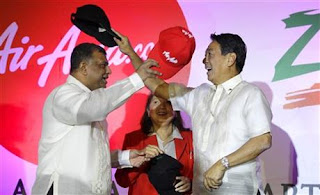 As of May 2013, Zest Air suspended its chartered flights between Boracay and Taipei because of the political tensions between the Philippines and Taiwan.[14] 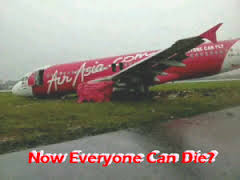 On Aug. 16, 2013, the Civil Aviation Authority of the Philippines suspended Zest Air's Air Operator certificate due to a series of safety breaches.

Among the violations were:[15]


Tony F must be absolutely reckless in his zest for expansion.

If CAAP could announced in August of Zest suspension for the above reaons, it means Tony F's management just do not care for safety and thought he can get away in the Phillipines.

There are issues of late issuance of AOC license from our local DCA, many occassions of crash landings, rejection by Singapore to do maintenance for Air Asia, and their maouvring to cut cost (and indirectly quality and conforming) on C and D checks.

One of the issue raised was refueling with paseenger on board. As one commentator complained, Air Asia still practise that in Malaysia. Read comment here.

Tony F has no concern for safety thus the reason he rant and rave on airport aerobridge without concern for passengers' safety and airport security to insist passengers walk on the tarmac..

What is DCA doing about all this? 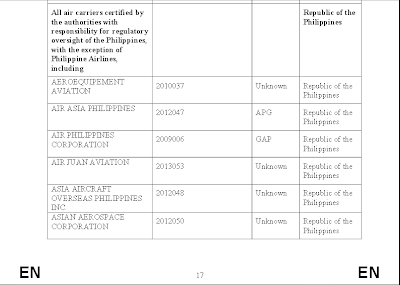 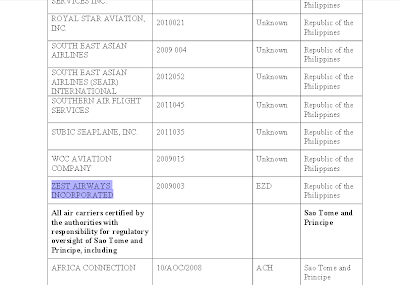 All Phillipines air carriers with the exception of Phillipines Airline are banned from the EU. It means Zest had long not been complying with international safety standard. 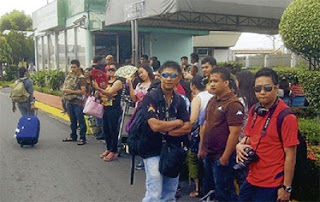 Yet Tony F does not care and even allow Malaysian to board on Zest.

If the less efficient and effective Phillipines authority can make a deciaion on Zest, why can't our DCA be thorough and strict on Air Asia?

Don't bow to the public relation-psywar of this conman against the authorities.

The EU's updated blacklist can be found here for Tony F to use as his shopping list of new airlines to buy. Meanwhile, rivals are moving in to fill up the void left by Zest and Air Asia shareholders should start brushing up in their delivery of "Tony F.. you're fired!"
at 8/20/2013 09:31:00 AM

haha. Yet AA is still NO 1 preferred airline for Malaysian especially civil servants.

Anonymous said...
This comment has been removed by a blog administrator.
6:12 PM

Anonymous said...
This comment has been removed by a blog administrator.
10:14 PM

Hope you are not illiterate and got someone to write for yoo.

Actually we do not release such comment but since we answered it, we will not erase yours.

No hostilities, insults and bad language, especially against your host allowed here. Kapish...?

Dont bother to reply. You are not getting anymore air space.

Here is the real story behind AAX IPO :

And to to top it off the latest financials:
http://www.thesundaily.my/news/803477

With Indian and Indonesian economies entering deep funk, expect more fireworks due to salah timing. No wonder there is talk about the Indian launch being deferred:

And I bet the taxpayer will pick the tab when the dollar denominated debt becomes too burdensome :

Since the warrior has mentioned AirAsia's financials, would he care to take a scalpel and microscope to MAS's finances, in the interests of fair play?

According to reports, for Q2 ended June 2013

- MAS made an operating profit of RM8 million on a revenue of RM3.7 billion.

- passenger yields have continued to fall, in spite of a 17 per cent rise in capacity.

According to the MAS CEO, the strategy "is all about winning customers back and managing our costs. Forget about yields, so long as we can build a sustainable margin...Given the size of our operations, we have to grow our revenue faster than our costs." (Singapore Business Times, Aug 22, 2013).

His turnaround strategy, as elucidated, depends on

- a willingness to accept lower yields in favour of "sustainable" margins. It's basically a "load active, yield passive" strategy.

- winning back customers. From the competition, obviously. The question, which the MAS CEO hasn't answered, is if the competition is going to sit back and let MAS pull over their customers.

- not implementing layoffs on a workforce of about 20,000 employees. So much for productivity!

But, of course, MAS can always go back cap-in-hand to the government for yet another handout/bailout. Without any shame, now that the PM has ruled out the privatisation of the airline (the failed privatisation to Tajudin Ramli still rankles in certain quarters?).

So, while commentators are spewing hot air and vitriol over AirAsia being caught in flagrante delicto, MAS is being given the benefit of the doubt.

No doubt, the CEOs of SIA, Garuda, Qantas, Cathay Pacific, Emirates and Qatar Airways will be regarding all this with bemusement, if not considerable amusement.

A commentary box is to state your view and just let it be.

The likes of you, Jesper, etc do not understand that. You are trolling here for Air Asia to quarel.

I'd rather have an empty comment box then having commenters like your guys which only c reate animosity.

Open your own blog and shout and praise or defend your Tony F like God.