Pre-Merdeka history for the foolish, dumb and blind 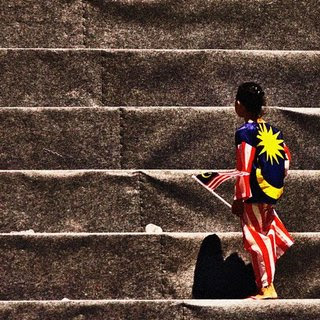 While tomorrow is Tanda Putera's premier, there is a group organising a public forum entitled Merdeka 100%: Sejarah yang digelapkan.

It will be nothing more than an over-simplified, melancholic, and spinned version of history by a group described by blogger Desaru With Love here as "bebal, tuli dan buta sejarah" (foolish, dumb and blind on history). 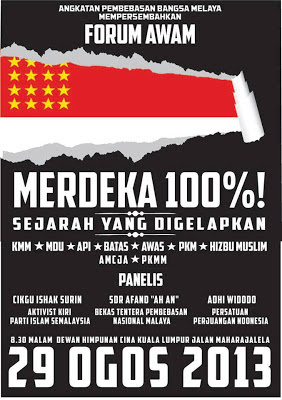 These fringe groups of youth have been parading a strange looking flag, which looks neither Indonesian nor Singaporean, as alternative flag of Malaysia on the eve of Merdeka for the last few years.

Last year, it went violent as pictures of the Prime Ministers was stepped on.

Such symbol of stars on a red and white flag have never existed anywhere in Malayan or Indonesian history. What reversion are they talking about?

The flag issue have been debunked at length from the year it first appeared in 2011. Goggle for it. 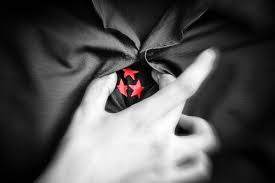 These fringe youth groups are claiming Malaysian history is lop-sided and written to suit the victor, as the saying goes. In fact, there is an underground movement calling for the rewriting of history in line with the rewriting of the constitution.

While the history is clear that UMNO played a crucial role in getting the public to rally for Independence and negotiate with the various stakeholders, these groups wants to claim that the real fighter for independence are the communist.

How could they when they have no locus standi to claim independence?

The history and arguments against communist claim as independence fighter was debunked when Mat Sabu made it an issue to glorify Mat Indera and Chin Peng. Goggle it because we are not going back to that arguments.

Actually, we were not technically colonised but more accurately, out-sourced the role of his highnesses government to the British by treaty at gunpoint or voluntarily.

We were looking for the solution to end those treaties with the British that started with Pangkor Treaty of 1874. The existense of large numbers of immigrants complicate matters.

UMNO was collaborating with the colonial British, they claim. Thus, UMNO is not true Malay nationalist but perpetuate Malay aristocrasy. The true nationalist were PKMM. Unfortunately, they see communist as patriots.

True that the communist were the first to call for independence but the communist members were not citizens of Malaya. They wanted to be in power upon the surrender of Japan but did not get the local majority support.

The communist was established as freedom fighter by a covert British operation. Bintang Tiga or Malayan People Anti-Japanese Army (MPAJA) went on the rampage to kill non communist rakyat, especially Malays and even forcibly entered palaces with intention to kill the rulers and assume power.

They were not seeking for independence but double cross the British and took control of government in that 14 days vacuum of power between the departure of Japanese and return of British.

Those who underwent through that trying period saw another side to the Bintang Tiga. Not as freedom fighters or seeking for independence or terrorist but was Chinese power domination at work. The ideological content was merely temporary convenience.

First thing about discussing history, it should is not opinionated but describing the events factually. It is in the review that one can give a substantiated opinion.

In June 1971, Tun Dr Ismail gave acknowledgement to the "Malay Left" when receiving his honorary doctorate in law from Universiti Sains Malaysia. 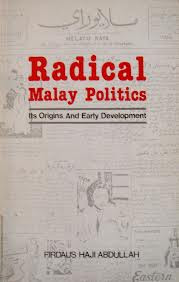 
Freedom fighters in those years were divided into two groups. One group believed that freedom could only be achieved through revolutionary means, whereas the other group believed in the constitutional process.

British colonialists had two alternatives, namely, either to agree to granting independence to the moderate group or to take firm action in a continuously combative manner in the face of armed struggle.

The British decided to concede to the nationalist group which chose the constitutional path and possessed the basis for compromise with other ethnic communities in this country.

It is true that independence was achieved by the moderate group, but history has also shown that the radical nationalist group also made its contribution towards the achievement of independence."

We remembered Prof Dato Firdaus Abdullah work because we met him in New York in 1981 when he was doing his doctorate at Yale University.

Back then, we were pissed that he came to our organised conference with his paper untyped and we had to help prepare, type and print his paper in the wee hour of the morning.

Met him again yesterday at a Conference.

Some of the event mentioned by these fringe groups have some truth but it does not enforce the counterclaim in favour of KMM, PKMM or AWAS. These groups are not as they claim themselves to be.

While the claim that UMNO collaborate with British is true, the "radical nationalists" as described by Prof. Firdaus received favorable Japanese treatment from the Japanese Military Authority during their World War II occupation of Malaya.

At the same time, "the radical nationalist" came into being with support from the communists. Some are actually communists by idealogy like Mokhtaruddin Lasso and some were just anti-British like Ahmad Boestamam. 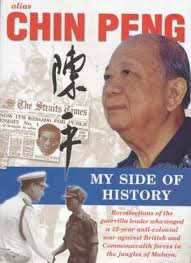 For years, the "radical nationalists" had wanted to deny their communist link, but Chin Peng himself acknowledge in his book, "My Side of History" that PKMM was borne out of the Communist Party of Malaya.

They are against the British, but they were received favourably by the Japanese, and at the same time, they are affiliated with the Communist that was borne by the British.

During Independence, these people were opposing and still up in arms against the the legitimately empowered by Constitutional and elected government.

Then came the idea of coalition with the Indonesian, Ibrahim Yaacob, the PKMM leader was willing to be an inferior partner to the Indonesian in Melayu Raya or Indonesia Raya.

Where is their sense of Independence?

Independence was achieved with compromise and not acceptance with the various ethnic groups, so there are bargaining and give and take. Many forgot that UMNO was then accused by PAS as working with Chinese and today they are working with DAP and trying hard to label UMNO as racists.

Ibrahim and PKMM were together to form the UMNO to fight against Malayan Union in 1945 but they left when UMNO decided to take it a step at a time to unite the Malays before pursuing for independence.

At the time, state parochialism was strong amongst the Malays. Everybody was as parochial as the Kelantanis of today. 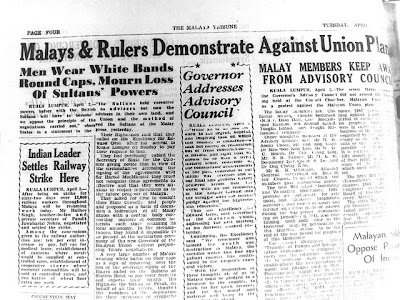 UMNO managed to drum up support and the unite the Malays that the militarily strong British abort their Malayan Union plan. Ibrahim was just not able to do so because as Prof Ramlah Adam wrote in her 2002 book, "Sumbangan dikenang": 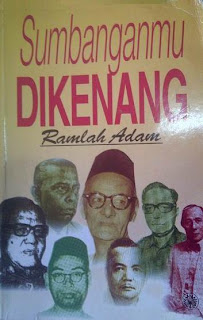 He was no different from the other pro-British Malay aristocrats.

In a trip to Japan in July 1943, Ibrahim brought along few aristocrats and royalties. They are the very people that he described as oppressor of the Malays.

Ibrahim potrayed himself as anti-feudel but he named royalties and aristocrats as members of a shadow government for his 1945 initiative under an organisation called Kesatuan Rakyat Indonesia Semenanjung (KRIS).

Ibrahim was lost in his allegiance to his Sulawesi homeland and admiration for Indonesian President Sukarno. His grand idea for Melayu Raya would have replaced the British colonial with another colonialists. He was not seeking for independence. 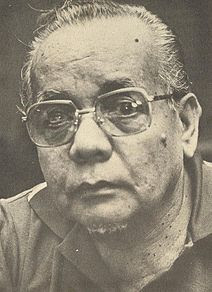 Prof Ramlah had referred to the works of Ahmad Boestamam and his son, Rustam Sani in her book. We remembered meeting Rustam in that New York conference in 1981.

Another point worthy of mentioning is the attempt by PKMM to work with the British by giving support to Malayan Union. Prof Ramlah wrote:

PKMM tried to stab back at UMNO but their past with the Japanese and PKM returned to haunted them.

Subsequently, they formed a coalition with AMCJA to form PUTERA. They issued a People's Constitution, which is being promoted by Dr Kua Kia Soong and perhaps MyConsti group, to match the Federation Agreement of 1948. Prof Ramlah wrote: 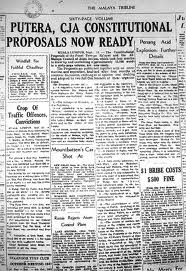 He failed to realise that Malaya through the states were legitimate and bonafide entities and the 1948 agreement corrected that misconception that arise from Malayan Union. He basically dismissed the sovereign status of the states and was ready to concede to form a new nation. 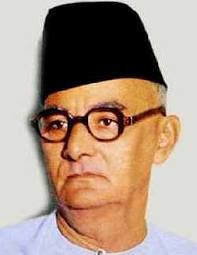 It would be expected that these fringe groups of young people would try to claim the history of Dato Onn Jaafar in their favour. He was instrumental in initiating UMNO and was the first YDP of UMNO but abandoned it to pursue multi-racial party politics.

In the 1952 Kuala Lumpur council election, Dato Onn-led Independent Malayan Party (IMP) could only win two seats. MCA had formed a coalition with UMNO and it turned out voctorius. That formed the basis of cooperation and power sharing that is BN today. Prof Ramlah wrote:

The Chinese wanted unconditional jus soli citizenship, rejected use of Malay and English as national language and language in school, and demanded a Chinese University and Chinese army. Dato Onn rejected to all their requests and Tan Cheng Lock and MCA view him still as a Malay despite IMP's slogan "Sama rata. keadilan dan  kebebasan" (equlity, justice and freedom).

At the 1955 election, Dato Onn returned to his true self. Prof Ramlah wrote: 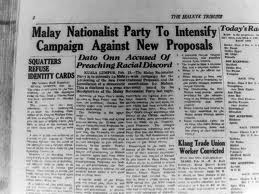 He viewed UMNO has deviated from their struggle against Malayan Union of 1946. Yes, UMNO had to concede something in order to gain something else. Did UMNO do the right thing to accept one million Chinese and Indians as citizen?

To correct Dato Onn, there was a condition for the citizenship.

They have to accept Malay as national language, Islam as religion of the federation (not official and ceremonial religion), accept the Malay rulers, special right of Malays and eventually all Bumiputera, and most importantly, adhere to the Constitution. 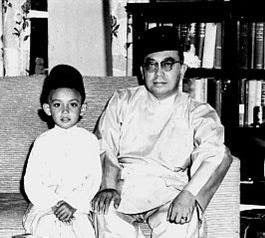 History always repeats itself. If one bother to ponder, some events are repeating itself.

One thing that these bits and pieces of history should teach all of us. Change in Malaysia must take approach which are moderate and not drastic, evolutionary and not revolutionary, and inclusivity must never exclude the majority race.

In his conclusion, Prof Firdaus acknowledged the seldom leveled accusation made agaianst UMNO:


... the inherent weakness of Malay opposition forces in present day Malaysian politics was rooted in its historical development which was plagued by suppression and suppression since colonial days.


Nevertheless, one problem with opposition politics in the past is the incohesiveness in their ideology, program and organisational structure. It leads to another point from Prof Firdaus:


Even when political opposition has little organisational strength it does not serve as an interest articulator bu such means as convening meetings and conferences wherein the needs and aspiration of the general masses are articulated, made known to, and may be acted upon by the governing authorities.

That is for those in power to relook.

Knowing what Ibrahim Yaacob did, I'm very curious on why UKM wish to honour this foreign agent by naming one of its college as 'Kamsis Ibrahim Yaacob'? Do they have a different version of history?

Left wingers are always a part of history. It is part of our nationbuilding process.

However, the left wingers should not make the claim that the winner do not allow the writing of that side of history.

It is not so much as disallowing but who wants to write and sell books on the left wings?

The depth of writers, academia and book publishers and markte has its limitation. More so with Malaysian are not avid readers.

It is a matter of dollars and cents.

The fact that the bloggers highlighted attempt to analyse and present a history of left wing means there are efforts.

Only things is lets not politicise history. It is for us to learn and benefit from the past