Does DAP and PKR need PAS? 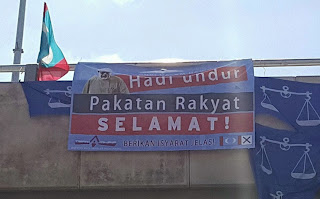 By now, most newspapers and political analysts would have published their analysis of Permatang Pauh by-election.

In this blog's last posting, most of the possibilities were covered and it is just a matter of waiting the outcome of the by-election.

One point most glaring from yesterday's result that need to be highlighted to all political players is that Datin Seri Wan Azixah won without PAS help.

Despite the boycott, she only had a reduction in majority by 3,000 votes. It could mean PKR and DAP or should it be DAP and PKR does not need PAS election machinery.

There will be those that will argue it is only relevent for Permatang Pauh.

In the two by-elections, BN and PKR retained their respective seats. Both saw majority reduced.

However, BN saw majority reduced by almost 7,000 in Rompin as compared to PKR by almost 3,000 in Permatang Pauh.

Due credit to BN's Suhaimi, he was up against an MB, aCM and a party President but yet brought her majority lower.

Will that be a case to feature more young candidates? 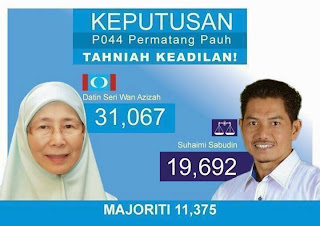 The factors contributing to the drop are believed to be the PAS boycott and Chinese protest to PKR's stance on hudud and recycling Wan Azizah as candidate.

One must admit that low number of outside voters due to weekdays polling and midweek after long 4 days weekend may have contributed to the low turnout.

Wan Azizah could have achieved more than 10,000. Then PKR and PAS would have showed they were able to hold to their voters.

The immediate response by various interested groups was to point finger at ato Najib and family, GST, 1MDB, and latest sabotage bomb by a pro-BN blog on Tabung Haji. 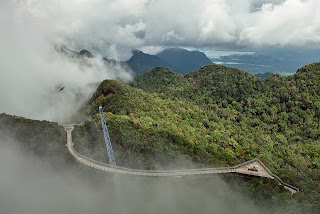 Definitely the voters are sending rather strong messages. It is up to the gods of PWTC to contemplate on the results.

THE POLITICAL MASTERS OF PAS ARE INDEED VERY,VERY,VERY STUPID.

UNFORTUNATELY,THEY ARE MERE "TIN CANS" WITH NO SUBSTANCE.