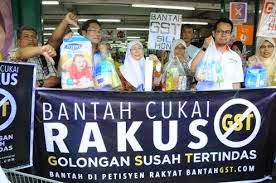 Those familiar with Rompin constituency does not see the drop as significant because past wins had always been between 9-11,000. Yesterday's number is not too far from the natural figure. The huge majority enjoyed under the late Tan Sri Jamaluddin Jarjis had long been seen as unnaturally induced.

Undoubtedly, the concern was the loss of two Felda voting districts to PAS. The immediate reaction was to blame it on PAS's successful instigation on the drop in FGV shares and implementation of GST.

There is the concern of it's impact on Permatang Pauh as it is the same issue focused by PKR here. In addition, the results in Rompin and Permatang Pauh is being seen as indicators to Dato Najib's premiership survival.

Nevertheless, there was happiness for the BN camp as they won two Chinese voting districts won. An early indication for the return to Chinese votes. Will that be the indicator on the change in Chinese votes for Permatang Pauh? 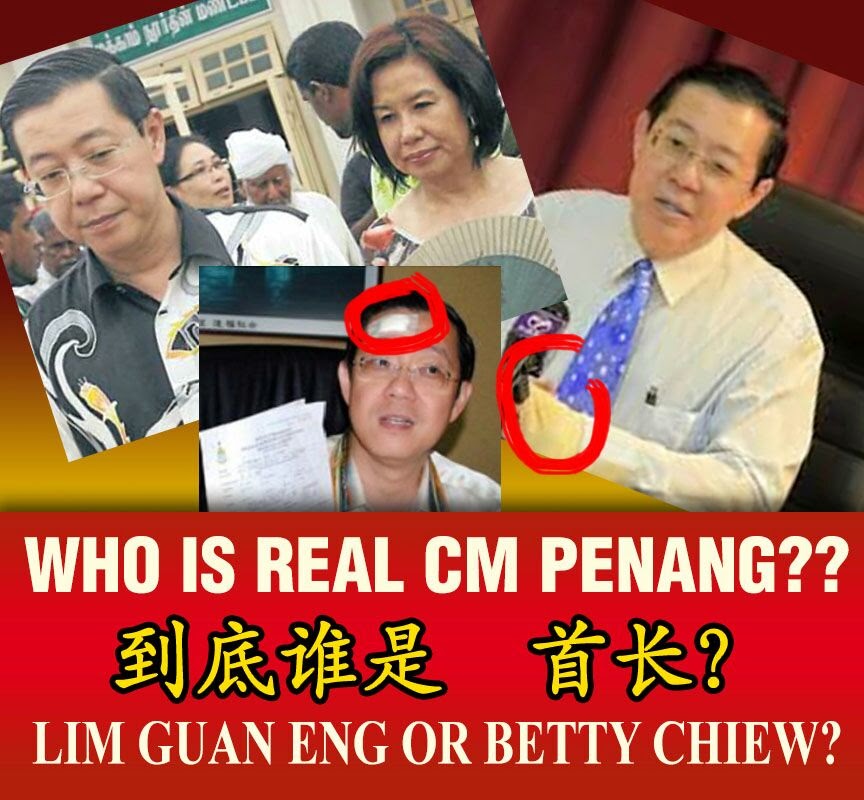 From the early walkabout, there are signs of frustration and animosity building up against Chief Minister Lim Guan Eng within the Chinese community. They begin to stop tolerating his arrogant and lying ways.

The manner he indiscriminately park his PG1 official Mercedes has been the talk among Penangites.

Within the press community, they are all to familiar with his attitude to refuse to take responsibility and quick to blame others. When asked to reply to issues that seemed detrimental to him, he would refuse or go on a tantrum.

All along the thought is the Chinese business community should be happy with his pro-Chinese stance, no NEP policies and preserving of Chew Jetty. To the contrary, certain segment of the community view him as greedy for monopolising the bulk of contracts and projects in Penang.

Some of the Chinese businessmen, which complained under BN rule, are now saying things are not any better under DAP and they are doing a whispering campaign to boycott the election to send the message to Guan Eng.

They remember his promise that he will only stay for 2 terms. This is already his second term.

It is far fetch that the 23% Chinese voters will boycott but it seemed Chinese bookie are already looking for a lower majority of between 6,000-8,000. There was a rumour that the number was sliding down fast that bookies were rejecting bets but propped up by certain party as to not disrupt the stealth campaign strategy of BN. 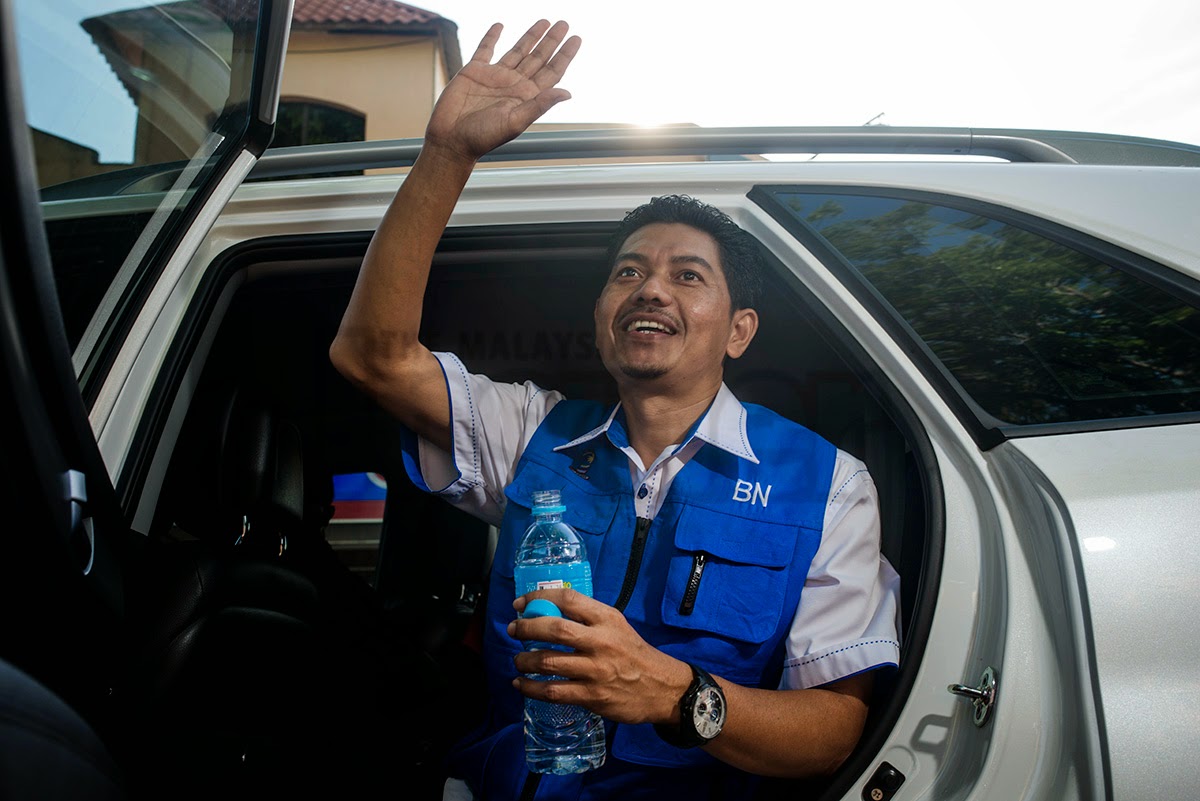 It seemed far fetch to think that BN can retake Permatang Pauh. As far as the sight, sound, smell and touch does not seem to show, thus it is difficult to feel so. It looks like a nighmare for the cybertroopers and propagandist working on the psywar to bring a winning perception.

However, confidence is brimming and the Ketua Bahagian, Cikgu Zaidi was smiling at the BN Command Centre last night.

He said sentiment have changed and the community have moved on from the Anwar issue. Anwar and sodomy is hardly spoken in the campaigns by both UMNO and PKR, except for Nik Nazmi at a relatively subdued rally at Tesco Extra, Seberang Jaya.

One warlord after one warlord were talking of never seeing something like this ever. It seemed everything swarmed into Permatang Pauh and there is a marked seriousness in doing election programs at every PDM.

One former Ketua Bahagian said, "There is the signs of winning. Please write that." He must have been the most optimistic. Early in the campaign he said Suhaimi would lose by between 500 and one opposition party source claim Suhaimi to lose by 1,500-2,000 votes.

He was asked, "How about GST issue?"

One on the table said it could effect between 10-20%. So if PAS actually boycott, the actual gain could be negated by GST.

The former Ketua Bahagian said, "Only few Melayu vote based on issues. To get their votes, one need to touch and win their heart. Kasi bereh, gula, dan tepong!"

"Itu semua barang tak kena GST Tok", a reply slipped in as everyone burst to laughter. The GST perceived result in Rompin could have impact in Permatang Pauh, said someone on the table. 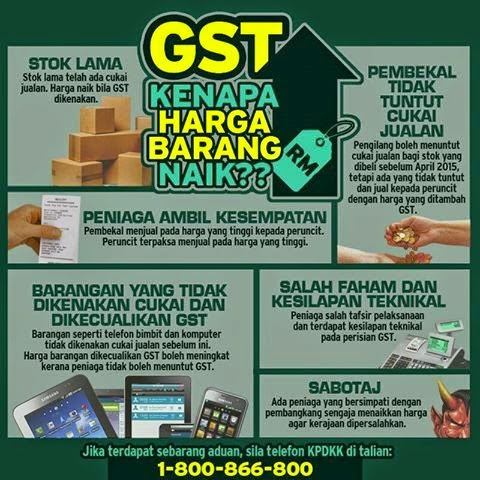 For the last 1-2 weeks, the public anger on GST has reach to a new height as most of the blame were leveled at Dato Ahmad Maslan and Dato Hasan Malek.

Ahmad confidently made all sort of snake oil claims, particularly prices of goods will not go up and botched the top up issue. Replacement of the 5-11% SST by the 6% GST did not resulted in lower prices. Reasons as explained by Lokman Nor Adam, JAS Pemikir here.

Ahmad must be most paling malang for getting blamed for the top up issue. Telco sources said it was agreed a year or two ago that top-up will have GST. If normal telco service is GSTed, then why value added top-up is not?

He may have just returned for London and mistaken Malaysia as England where there is no VAT for top-up. But, blame must also go to MCMC for commenting on tax matter which is not under their jurisdiction. Nevertheless, a directive came to get Dato Shaberry Cheek to address the issue.

Ahmad also made an idiotic claim that Tun Dr Mahathir did not understand GST.

He forgotten that Tun M's administration had explored the idea of GST but not do it out of concern of prices and maybe politics.

Tun M replied back by saying Putrajaya did not understand GST in a talk in Universiti Sains Malaysia. His expressed concern was on implimentation and monitoring of prices. Putrajaya may have missed out on some issues. [Read Hishamh's Economic Malaysia wrote extensively on the economic issues here]

Politically, GST is a risky move on the part of PM. As Senator Dr Asyraff Wajidi said at the famous Sungai Dua Mi Udang eatery, it took developed countries between 2-3 years for the GST mechanism to stabilise. Ahmad Maslan promised 6 months. 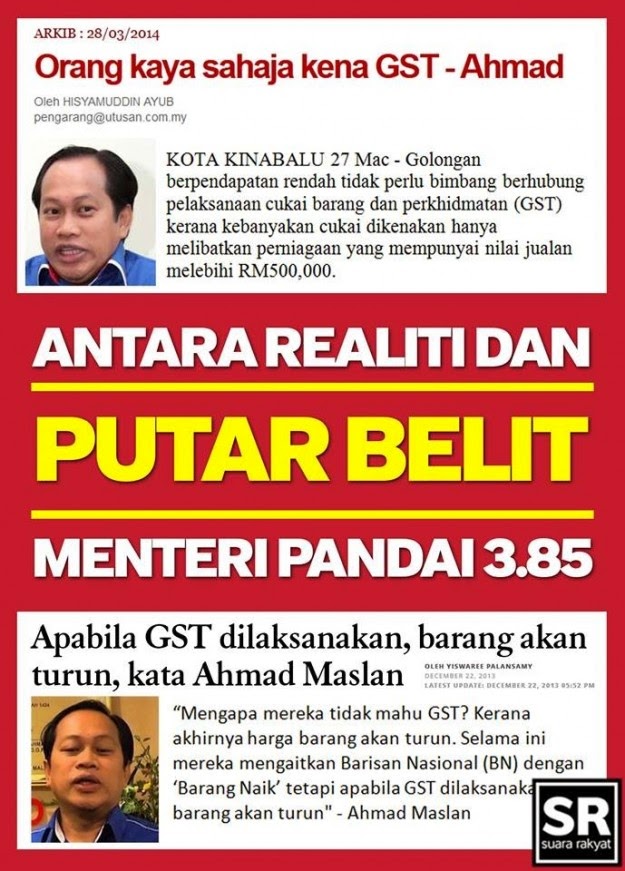 Communication is a problem.

Not only the misinformation by Ahmad Maslan, but also the government officers themselves do not understand and it is made more complicated by too many exceptions. Anyway, to blame Ahmad Maslan alone is not fair. He is merely a Deputy Minister and there are two full Minister in Finance Ministry.

Despite planning for 2 years, it is a surprise that Customs Officers could not answer issues raised by  traders and business people in GST courses. It seemed they admitted to not understand GST themselves.

How could they fail to understand a system they plan, will implement and should anticipate the problems? It is heard Customs switch off their computer system and refuse to answer phones on April 1st out of panic. Then, it is the government servants that is at fault.

Most politicians including Dato Seri Anwar and many current critics of GST commented that it is a good tax system but worry of communication and monitoring. By right it is an administrative issues that should not be politicise.

Though it seemed PKR's campaign is facing trouble, GST became their core issue at Permatang Pauh. 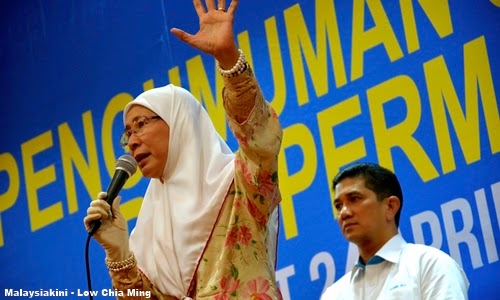 This time, there is no Kak Wan crying on stage and only her dragging the grandkids on stage. The 1MDB issue is talked about but not many understand. Furthermore, the information blackout by 1MDB does not allow much discussion.

PKR relies on loyalty and it seemed loyalty have got them a pre-campaign assured solid support of 25,000. The list and confirmation have been done. Another 10,000 is already a win.

Despite the open quarrel between PAS Permatang Pauh and Penang PAS Youth, PKR is confident of securing the votes of some 3,000 followers of the late Ustaz Hasan in the PAS state seat area of Permatang Pasir.

It is also the same area Penang PAS have trouble to run ceramah and getting cooperation from locals.

PKR see a win as a sure thing but it is a matter of how big a majority. Less than 10,000, Azmin will be smiling as he take up the task of taking of Kajang. For less than 5,000, Lim Guan Eng will be taking care of Permatang Pauh.

A loss will make Guan Eng lonely as it indicates a Chinese turnaround to BN and his failing influence. DAP could not place their puppet as Opposition Chief.

How about an UMNO win?

You need to start the ball rolling on GST even if it takes 2 to 3 years to stabilise. It will be even worse if you did not start implementing GST at all.

And why switch off the system when people are in need of an explanation?

chinese supporting BN because of PAS

I'm a Chinese who voted for PAS and dumped UMNO in the last GE. A vowed not to vote PAS ever again not so much of Hudud, but more on the pariah behavior of its leaders who are absolutely lacking in principle and honor in dealing with its PR partners. This is so blatantly obvious that any Chinese worth his salt would pulk in their presence. Give me UMNO anytime.

Yes, agreed that at some point we need to implement the GST.2-Major questions here..(1) Is this the right time to do it, when the national economy is shaky and the rakyat at large are getting reallyworried about rising costs of almost everything? (2) Why start.if at all,the GST at the rate of 6%?That`s too hefty during the so-called familiarisation phase, and taking into account the rakyat`s current economic woes.Why not start conservatively, say at 2-3%, and gradually, over time, step it up?A RM 1-2 price or cost rise may not mean much to some, but truly, it means really a lot to most folks these days.It may mean the difference between having just rice and plain curry, or with just a small ,simple fish thrown into the curry for protein!Think of that.And it`s no use saying now that special BRIM, etc will help soothen the pain.It`s like caning a child, and thereafter offering him some ointment to soothe the bruises.

At the risk of sounding racist, Mamaks do weild considerable influence in UMNO Penang.

They may not hold the top post, but they are kingmakers.

If you don't mind can your good self care to substantiate your good opinion with justification backed with facts & figures? Many thanks.