Who is the "30-something Penang-born businessman" that sold TMI? 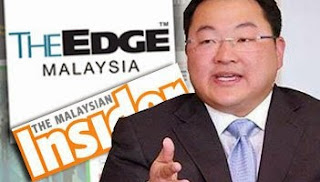 It confirmed the wind Rocky Bru posted something before it was finalised.

TMI confirmed in their report of their merger with the Edge [read TMI here]. Jahabar told The Star [read here] that said everything remain the same but only a different shareholders.

The Malay Mail Online also confirmed it [read here]. For MMO, it has its relevence because former Executive Director, Leslie Lau, Managing Director for MMO, Joan Lau and core editorial left TMI for MMO on June 2013 [read The Star here]. They claimed there will be a change in direction.

No mention of the seller.

Back in July 23rd, this blog wrote a posting based statement by JMM's Azwanuddin Hamzah [read here] that a company owned by Dato Kalimullah Hassan financed TMI. The company secured contracts from Inland Revenue Board and the profit was used to finance left leaning TMI. [Read more in AIDC here].

Kalimullah denied it [read Mkini here]. The link and editorial favoured Khairy so much that it is hard to believe. Knowing Azwanuddin is under the payroll of the new Kalimullah for Dato Najib, Kalimullah may have spoken the truth.

Azwanuddin is among the paid mouthpieces for the so-called media strategist Dato Habibur Rahman but lack credential or credibility to speak. Habibur is also owner of Fuel Card Sdn Bhd which was highlighted by this blog several times.

The real owner of TMI can be trailed to a Wikipedia posting on The Malaysian Insider [read here]. The extract reads:


TMI was started in December 2007 by a group of businessmen and journalists close to then Prime Minister Tun Abdullah Ahmad Badawi as a counterbalance against MalaysiaKini, which was deemed to be unfriendly to the Barisan Nasional (BN).

But after Abdullah stepped down in 2009, the group stopped the financing and the TMI top management, after talking to several people, eventually got funding with help from a 30-something Penang-born businessman with close ties to the current BN leadership.[4]

Who could that 30-something Penang-born businessman be? How could he be considered as having close tie with BN leadership when TMI was spinning news against BN and giving voice to the oppositions?

If the person had been Taek Jho Loh, it would be interesting. 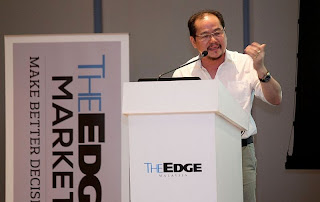 In June 2014, Jho Loh had a deal with Dato Tong Kooi Ong. Come February 2015, they are suing each other [read FMT here and Uppercaise here].

By May 2015, Tong turnaround to help divert attention from Jho Loh to the Board of Directors.

Politics is politics but business is business. The Chinese could do that but when angry or emotional, Malays rather see Tabung Haji sell the valuable and strategic TRX land and not see any Malay-Muslim institution own real estate on TRX. [Read Bigdogdotcom here and here].

If it is a question between principle and interest and they chose principle, that is fine.

But to forego interest when the principle is unclear or arguable, it is the ultimate stupidity. Imagine the 1,000 that gathered at Baling to protest against Tabung Haji just for PAS to takeback the Dato Azeez's seat. How naive and ignorant can they be? 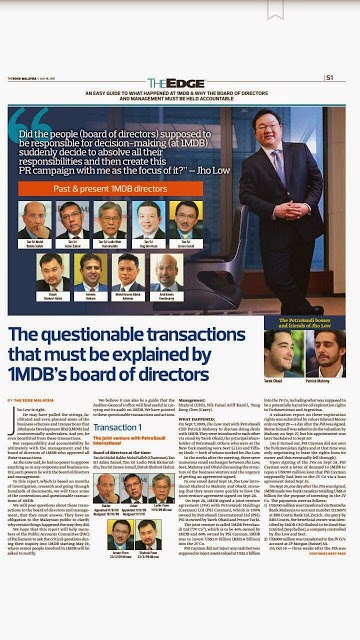 Off course, the fiduciary duties lies with the Board of Directors as The Edge enlisted questions that involved the Petrosaudi JV, money in PSI, takeover of power assets, option to Aabar, Penang land deal, and TRX bond.

Dato Abdul Kadir Jasin also posed his questions too [read here]. Glad that traces of Sarawak Report material is kept to a minimum.

Captain Seademon notice this change in UMNO behaviour to believe in anything and from any source when it suits them [read here].
at 5/20/2015 10:40:00 AM

I don't want to comment on the Jho-Low and Thong relationship. But I am just fed up with people that try to justify TH purchase of TRX land. First of all you have to remember that TH have all the money even to buy any land in the golden triangle. It is the same coz TH is buying the land at market value. It is just a normal transaction, why should TH bought the land in the first place, if MRCB can buy land from German embassy and most likely French embassy. TH should target to buy more land from non-bumiputra seller so that bumiputra ownership in KL will be higher. And please don't blame people that protest the TH/TRX deal as reason bumiputra losing the land to non-bumi. THAT LAND WAS RESERVE AS A DEVELOPMENT LAND FOR BUMI UNDER THE AMANAH PELABURAN BUMIPUTRA BEFORE IT WAS HIJACKED BY 1MDB LA BRO!!!!so tell me who is the culprit?

despite your numerous effort in debunking SR....Now one of their allegation is true!

There is indeed no MONEY in BSI Singapore!

Please continue to be in denial bro....

And this article is what exactly? What are you trying to say? Again i see a few liners about tabung haji, sarawak report, how malays are naive in being irrational. Did you miss the news bro? What SR said was actually true. There are no money in BSI, only paper asset. Yours truly, najib said so, no? So it seems that those quoting SR were true but you and anak atok arsyad ayub are wrong. Please keep us posted on that chap as he was so confident that there was money and how he use to be working for a top firm and no more fb after maghrib. Again, this article is what exactly?

In the first place how could us dollar be remitted to a rep office in singapore?

Cayman is only a tax haven n cayman island registered company was used for tax purpose.

The us dollay shd remain in psi laguna account for 1mdb (cayman) ltd.

If pm cant understand off shore banking how in hell did he manage all this. Sure kena tipu jho loh.

Not my job to interpret for you. It is you that shd interpret. Basically it is wgysiwyg with many messages and information. I write what i wanna write and not what you want me to write.

Your blog is among the blog that I respect the most until this 1MDB debacle of course.

Honestly, please pray to Allah for the truth and hopefully he show us both the truth.

Latest from.KJ - the "30th" flamboyant must be taken into custody... ( refering to Jho Loh's fingerprints, he..he. KJ said it) something that Nur Jazlan didn't want to do in the first place. Then, what he is going to do? Just a normal forensic report ?

As I've posted earlier.its jv.jho loh... this mystery man will always be the main prime asset of 1MDB that PAC must not resist ! Why ? He declared that he got nothing to do with 1MDB but without blunder, blamed on some Umnos' stupidity ! You know whom that he refered to...

Before, why the jv. didnt include FMT since the portal really needed financial.aid? I think RPK knew better...

Note : my comment is based on my personnel view.

Ameen. I pray the same.

I m looking for the truth and in particular as to how much money lesap? rm43 bil? rm27 bil? RM43 bil is hanya oOrang cakap or hanya borrowing?

Did riza made movies and buy properties in New York using 1mdb money though someone fumble to say it was from inheritence that got the razak boys to deny?

Whether the 1mdb bought properties too low a price without any basis? Shuld they be buying at RM7.000 psf.

I like the 1mdb endeavour into ipp. Long story to explain.

But i do not like if there is hanky panky going on.

We shd be pursuing the truth but it must be based on the principle of righteousness and truth. Not on perception and deception.

Deception n perception play are tools for and by those ill informed and devoid of knowledge.

Whats wrong in keeping your ideal cash in short term deposit and securities?

Near money is also money.

I said it once before and i will say it again. The 43 is total lost while the 27 are the ones that are accounted for. What is so hard to digest? You keep harping on trying to sound intellectual. Are you just daft or dumb? So 43 minus 27. Please explain where the hell it went since you claim to be in the know. Now "near money is also money"? Thats not the point. Najib said money, not near money. SR made the claim and you went and made statements. Need we have a replay session? You were wrong and you still are. Man up and admit it. Be a man dont be a boy.

Is this a joke

There are bigger issue than a mistake or a play of words. Hit on the right one. It will give you credibility.

Before you call me dumb or daft, go to SSM and get the submitted accounts. You are arguing in ignorance.

The asset or investment calculated was deducted agst rm43 bil to get abt rm27. But this is a superleverage company. Not usual company getting bank borrowing partly financing fix asset or bit of working capital.

You have never heard of near money or near cash like money mkt instruments, t bills, short term deposit or repo, etc?

Near money or near cash or liquid asset are asset that can be liquidated tomoneyor cash immediately.

No im not arguing in ignorance. You are just playing around. Like your boss said, the 43 bil is in those 2 parcels of land? Why didnt he mention what you mention? No need for technical terms bro, you can lay them out? I mean the difference. Im all eyes and ears. And a lot more are interested in what and how much you know. But i think SR knows more than you do. Issue at hand is this:

Najib said there was cash.
Now no cash. Only paper asset? Why beat around the bush. And despite the numerous time you bad mouth SR, they were proven right in this instance, no? And where are you?

Some commentators are mind readers hehehe

Is this a joke

You've not been following this blog. Blogger is an ex money market, fx trader, etc. Wrong person to call daft and dumb.