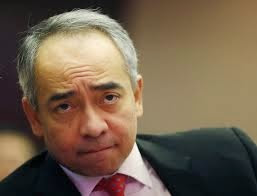 On Thursday, Dato Nazir Tun Abdul Razak's was reported preaching of Directors responsibilities to the Board of Directors of 1MDB on Thursday [read The Star here and here].

He took the BOD to task for not addressing the growing concerns on the fund and its financials and felt a responsible board should appoint an independent auditor to verify the accounts immediately and deal with the mistrust pertaining to the financial position of 1MDB instead of waiting for the Auditor General (AG) to do the job.

Many were surprised why he made the statement when it is common knowledge that the Auditor-General is already reviewing the 1MDB accounts. Today, the answer seemed obvious. He could be  trying to divert attention from a not so positive development in his own backyard.

CIMB seemed in trouble as the The Star reported:

CIMB said the MSS was put in place after looking at the current operating cost structure and desired efficiency levels across the franchise.

The group has over 41,000 employees located in 17 countries.

"This is consistent with return on equity and cost-to-income plans we have outlined for the future," said CIMB Group Chief Executive Tengku Datuk Zafrul Aziz Tengku Aziz in a statement.

He said MSS was also a response to its employees both in Malaysia and Indonesia who have enquired about such schemes.

The MSS exercise received the backing of the Board of Commissioners (BoC) and Board of Directors (BoD) of CIMB Niaga.

To that extent, Zafrul said the BoC and BoD of CIMB Niaga have decided to adopt the MSS and offer it to the staff in Indonesia as this was consistent with the operating strategies of CIMB Niaga.

"This exercise in Indonesia is also timely given no such programme had been offered to staff since the Bank Niaga and Lippo Bank merger seven years ago," he said.

The bank stressed that the MSS was offered strictly on a voluntary basis and all applications were expected to be submitted by May 29, 2015.

Employees who have successfully applied for the MSS would receive packages based on rank and years of service, as well as, options for extended medical cover for three years, and participation in re-skilling and outplacement programmes.

It had a market capitalisation of approximately RM52.4 billion as at 31 March 2015.- Bernama


MSS is a fancy corporate word for job loss. The common practise would be to cut costs and only retrench staff in desperate situations. Cut cost to save job should be the priority. Nazir took the option to cut jobs to save costs and his annual multi-million bonus.

It could be a typical heartless corporate move or only indicate a desperate situation or hasty decision making.

Since CIMB was appointed by Putrajaya to advise on potential sales of energy arm [read MI here], Nazir has been rather over eager to  clear up the 1MDB issue [read TMI here] and wanting for fast fee to liquidate 1MDB [read MMO here].

Already opposition and their propagandist were successful at railroading the listing plan. As initiated by Sarawak Report's allegation of false documentation, many parties including Nazir seemed to be assisting them to get bankers to pull the rug from under 1MDB.

1MDB has finally realised that it has gone over board and issued a warning:


Media statement by the Board of Directors, 1Malaysia Development Berhad, on 15 May 2015.

1. The Board would like to stress that 1MDB accounts are audited by an international audit firm, Deloitte.

3. The Board takes malicious and slanderous allegations seriously and reserves the right to undertake legal action.

4. Presently, the Board and Management is co-operating fully with the Auditor-General, the Royal Malaysian Police and the Public Accounts Committee in the conduct of their reviews of the company.

5. In particular, the Auditor-General is conducting an independent review of 1MDB's accounts, as agreed by the Cabinet of Malaysia.

6. We, therefore, seek the patience and understanding of the public and interested parties to wait for the results of these reviews. We request that no one should prejudge the matter without thorough facts ahead of the reviews being made public.

7. We have full confidence in Deloitte and the Auditor-General, as does our 100% shareholder, Minister of Finance Incorporated.

8. The Board gives its undertaking that in the event of adverse findings the Board will take all the responsible measures and actions.

The sabotage propaganda by Opposition and Sarawak Report will benefit CIMB.

They will be the first beneficiery CIMB could start to take up their role as "liquidator" fast and immediately collect their exorbitant fee for their ailing organisation.

Fresh in the mind of market players are the exorbitant fees Nazir collect for the unnecessary plantation tri-merger and many other mergers. It only shows the selfish and self-centered nature of the youngest son of Tun Razak and Toh Puan Rahah.

Off course, he has basis to ask 1MDB Board of Directors to appoint an independent auditors and not rely on audit by the Auditor General.

There is common reservation among accountants and civil servants in the ability of government auditor to verify Deloitte's signed audited annual report for 2014 and in carrying out forensic audit.

However, that view could have been made known through proper channel because it is available to him and it is as easy as a phone call or chat at family gatherings for him.

Nazir's forceful statement on 1MDB Board of Directors has the strong directive tone as someone superior instructing his corporate appointees. That tone should have been more appropriately expressed by his eldest brother, Dato Najib.

Despite being appointed as CIMB Chairman, Board of Director of Khazanah and Chairman of Khazanah's Executive Committee, it was heard to be a mere compromise to his real intention. He has been thinking that himself should be filling the position of Minister of Finance.

He may do a better job in analysing the economy, understanding the mechanics of business and drawing certain type of policy. However he lacks one major element.

Nazir is no politician and does not represent any constituency. thus no locus standi to say he represent the people.

Maybe he could be appointed senator and assume the position, but he does not have the heart to feel for the people.

For instance, when CIMB could not get the job with the fat fee enjoyed by Goldman Sach for the many roles played for 1MDB, Nazir pulled a tantrum to mother, refuse to participate in 1MDB and leaked information to railroad 1MDB.

Does he has the solution to solve the political minefield for the annual RM19 billion legacy subsidy to IPP in which pulling the subsidy would result in rising energy cost and legal implications? Thats about the people.

1mdb problems is way way bigger than what event issues cimb is having . Its not relevant at all to say Nazir is diverting Cimb issues by pointing to 1mdb.

It does not make reason 1mdb to be ignored and we all should focus on 1mdb.

No troll commentary get released. Read warning before commenting.

why attack the messenger?

Hello you miss the part that says Najib appointed his brother Nazir as
EPF Investment Committee..
This is where the big money is 700 billion of workers money.
His idea of investment for EPF would be where he would make money like
his tri mergers.