That was facebooker Azmi Arshad's view on those who believed Sarawak Report's false document lies. Anyone with any knowledge of procedures would know it was a lie from the first minute they lay their eyes on SR's report.

SR could be running out of ideas. Subsequent to fabricate document claim, SR applied the same theme on allegations on Jho Loh's money swindled from 1MDB and alleged false documents to Bank Negara and Deutche bank.

Yesterday Leslie Lau's MMO reported [read here] unconfirmed sources claim that Deutsche Bank Singapore is recalling their loan to 1MDB. So happen it was after Rafizi hinted of RM3.6 billion loan expiring in August which match that of Deutsche Bank Singapore. SR previous report on alleged falsifying of documents was mentioned to substantiate the story, thus it trails from there.

Too busy and malas to debunk till Azmi wrote the stinging posting on his FB. He is son of famous educationist and founding Principal of ITM, Tan Sri Arshad Ayub.

Hopefully those making allegations against 1MDB could substantiate and improve the credibility of their soalan-soalan allegations. If they have access to our Negarawan, advise him accordingly. To fight on principle ground, it must be backed by right fact, not based on non-credible references and purely political spinning which are usually shallow. 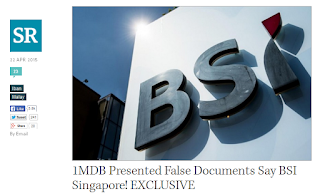 No, the title is not an error.

First of all, I don't understand why there is such a fuss of why money is kept in Singapore. I’m too lazy to explain why not but so what if it's in Singapore? How does that indicate fraud?

Even more stupid or zombistic is for anyone to think 1MDB said the money was in a Singapore account because then nobody would be able to find out there is actually no money in the account.

Okay, then you may say to me: "Eh podah lah Azmi. Do you know there is no money in the account? 1MDB supplied false bank statements. Come on lah machai…. are you blind or what. Masih nak tegak benang yang basah. You’re too arrogant to admit you’re wrong.” (Do I really sound arrogant? I do? Good. That’s because I’m never wrong. Oh alright, almost never wrong).

Hmmmm….. No lah zombie, you can’t compare Enron to 1MDB and I’m too lazy again to explain why not but let’s just say that 1MDB isn’t a company issuing tons of sales invoices everyday where forged ones could easily escape audit test samples. 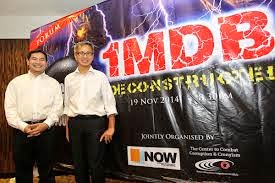 Surely Najib would have to step down. But he didn’t because he must have been briefed by 1MDB and the auditors that Tony Pua and Rafizi were just having another common wet dream.

At that time I didn’t have much time for Facebook because I was taking my beloved wife for treatment on a daily basis (lasting a few hours each time) and that I had promised her no FB after Maghrib. (A story for another day). So I didn’t go trolling on walls of zombies or pick fights with pentaksub you-know-who supporters.

And when PM was being attacked over this I thought serves him right anyway for keeping mum and not fighting back. What irked me a bit though was that even 1MDB and Deloite did not respond.

Not that I blame them too much because for every question that is answered, 10 more will come up giving them only more work to do. (Zombies will only believe Toilet Tabloids).

Okay, now let me tell you how I knew the “false bank statements” was just another one of the Opposition’s wet dreams. It only took me 5 seconds to know, not because I’m smart but because I was once an auditor myself (with KPMG, not Arthur Andersen or Deloite ya) being paid peanuts working more than 10 hours a day and weekends. Tak boleh claim overtime.

Yes, we review the cash book, bank book / bank account ledger, bank statements and bank reconciliations but the verification does not stop there. Usually on the first day of the audit we send out “Standard Request Letters” to all the banks of the client and do the the rest of the field work while waiting for the replies to come back from the banks.

Now, the client cannot intercept the replies from the banks and change the numbers in the Standard Letter. Why not? Because the return address will be to the audit firm’s office.

What this means is that even the client (such as 1MDB) won’t know the content of the bank’s reply. No bank is going to be so reckless or stupid to reply there is money in the client’s bank account when there isn’t any. The bank’s reply will not only tell the auditor how much money there is but also of any loans (with that bank) that the client might have “forgotten” to tell the auditors about (to hide their liabilities).

In other words, false bank statements concocted by even Tony Pua, Rafizi, the Sarawak Report and reported in Toilet Tabloids (TMI, MKini, MMO, FMT etc) will not fool the auditors about the amount of cash or loans with the bank.

So if 1MDB’s accounts show they had RM6.6 billion cash on 31/3/2013 and RM3.8 billion cash on 31/3/2014 then that’s truly how much cash there was. THERE IS NO MONEY MISSING. There is no such thing as the DISAPPEARANCE of RM42b or RM27b or RM7b or whatever number you-know-who will mention next [refer to our previous posting here also].

Why can't you just wait for the AG to release his report and then for PAC to do their investigation? Why keep asking the same and obsolete questions over and over again, even questions that have already been answered?

Hasn’t it occurred to you that any Tom, Dick & Harry can create false bank statements and send them to the Sarawak Report who then shows those false statements to BSI knowing fully well that the bank will say they are false.

Why can’t you just trust the statutory auditors over Tony Pua and Rafizi? Don’t you know the track record of spins and lies of Dumb & Dumber?

I must admit though that it can sound somewhat more convincing coming from you-know-who and that’s what made even UMNO supporters turn against 1MDB and the Prime Minister. However, I am pretty sure that you-know-who knew they were false bank statements.

I don’t know how many friends I will lose by the time AG and PAC issue their reports.

No worry ... we can be friends Azmi. When is our next WA group meeting? 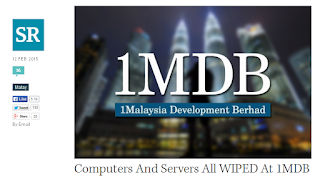 We can discuss this February posting by SR [read here].

Maybe it was SR themselves that hack into the computers and servers. And, maybe it was a fake report to justify their lie of having access to various fake emails, documents, etc. Or it could be to pre-empt the possibility that Dato Najib will debunk them.

He need to debunk them.

The common people doesn't really give a shit when SR, Tony Pua or Rafizi speak out. But when Tun M posed questions that has yet been answered properly by PM and demanded Najib yo step down, we, the common voters will rally around Tun M!

Forever too lazy to counter "lies" but too eager to boast of his credentials.

Now try counter Najib's own BANKER brother Nazir Razak, can or not?

Fb stalker said...
This comment has been removed by a blog administrator.
5:05 PM

Since this whole thing has built up to this level, the PM is now in the defensive position. Definitely not a good position to be in. That's what happens when you let someone who hates you control the story line.

Have you gone through the 1MDB website? You should. Check out the press statements they have listed on their site. Sadly, it's mostly defensively fighting allegations by the opposition media. There is not much positive media presence as well, since its formation. See, when you have that vacuum in positive information, it is easier to be attacked.

To me it's very simple, if Sarawak Report fabricated the emails then 1MDB should lodge a report with Scotland Yard and sue SR for libel and slander. Email trails are easy to verify once the service provider receives a court order. 1MDB, PSI and Mr Low were all implicated by SR, why have none of them sued the portal?

Same with Singapore Business Times which reported on the loan from Deutsche. If they misled just sue them.

If 1MDB and by extension the MOF and Mr Low do not take such legal steps to clear their name, then the public will continue to believe the allegations. After all dozens (or is it hundreds?) of emails with such details are not easy to fabricate, so people will tend to believe they are true unless proved otherwise.

Azmi says it is presumptuous to assume blablabla but then responds with his own set of presumptions. Apahal tiba-tiba semua orang cerdik jadi bodo sebab nak defend si bongok ni?

Worse: thanks to si bongok punya kerja, habis kredibiliti previously BN stalwarts hancur lebur. Including this blog. Who is going to believe anything you say after this?

Whoever thought up this 1MDB strategy, it has exceeded beyond their wildest expectations. Sekali hayun bola boling, habis jatuh sedozen BN heavyweights. Dasyat.

Btw any reason for emphasizing that this guy is & so's son?

So sad..
Malaysia masih ramai yg sgt dumb..
believing such lie about 'false bank statement'
Sampai yg profesional level and upto director level can swallow in this lies.. gosh..
As brick mentioned.. Those had been working with auditors should know within 5 secs tht is a lie..
The say is true.. When u lie enough, the lie will be true..
Now we can see how islam say 'fitnah lebih teruk dr membunuh..' because it kills the country instead of 1 individual..

Fast forward to today and the SR report turned out to be true. So much for your experience working as an auditor. So no cash deposited in the Singapore bank just units but when asked what form of units the reply was just units...units of kangkung kot...BTW MAS that's the monetary authority of sing and not our crony feeding airline has written to bank negara about this fiasco.
So who spoke the truth and who speaks LIES......Indeed you're JUST ANOTHER BRICK IN THE WALL.

i think the gov need to have good sensible balance on answering allegations and questions. trying to debunk what SR has reported indirectly gives them the sense of importance, and possibly, credibility. who are SR that the gov has to answer every allegations to? by answering to their questions, the gov would only show that they are concerned about what SR has to say. although they have to answer when the rakyat are concerned about it too. If the management of 1mdb is innocent, suing SR might be the right thing to do.