In Selangor, the headless calling the other headless 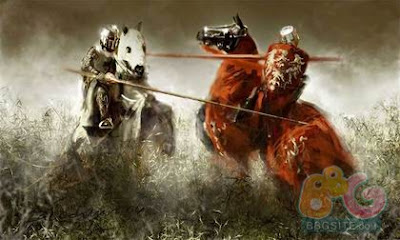 In Husin Lempoyang's posting here, he insinuated Azmin Ali as a pot calling the kettle black and did not look at himself in the mirror enough.

The UMNO's offer for Menteri Besar candidate is a common political talk in Selangor.

Till to-date,  Barisan Nasional and UMNO has not brought any face forward. The speculation goes on that there is no candidate from the present crop of UMNO leaders in Selangor that is without any issues or controversies.

Azmin took a potshot to spin a remark that UMNO is not offering a candidate because UMNO is do deep-rooted in moral issue that it is devoid of leaders with moral value.

Wakakaka ... look whose talking of morality?

Who does not know that PKR machinery is in worse shape than UMNO's perceived weakness?It is common knowledge that PKR depend on PAS machinery? By right, Pakatan's Menteri Besar should come from the stronger PAS. 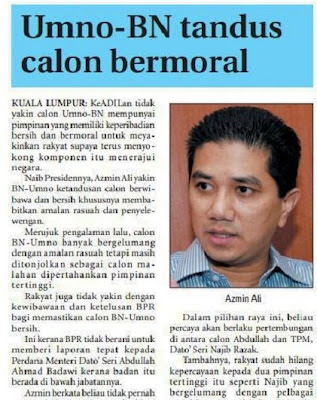 To answer the above allegation and common gossip, it is not so much as UMNO Selangor is devoid of any leaders with the right moral value. UMNO can pick any fresh grassroot leaders like they did before for former Menteri Besars Tan Sri Muhammad Taib and Dato Dr Khir Toyo.

It is just that the formula this time may not be about taking someone clean by virtue of being unblemished but the person must have a proven record of being clean. 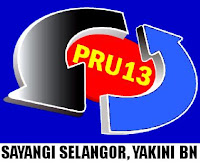 Perhaps the UMNO leadership is being more selective since the incumbent Menteri Besar has a certain credential.

Never mind the fact that Tan Sri Khalid Ibrahim is a walking disaster in public administration and he is not without suspicion of corruption and power abuse. A track record of leadership and administrative credential will be a bonus.

Then, there is also the need to gain ground on Chinese voters in Selangor's rural Malay versus urban Chinese political demography.

Generally the initial indication points to the Malays support returning to BN, thus for the relentless efforts by PAS and PKR to split the Malay votes. While in the Chinese majority areas, they seemed steadfast sure to go for DAP.

However, Selangor has a high level of undecided or atas pagar (fence seater). A credible and acceptable candidate for Menteri Besar will be a major advantage.

One important thing that one regularly named candidate (but most unlikely to be chosen) used to tell this blogger is that the last thing UMNO would do is to name the potential Menteri Besar so soon.

Such is politics that declaring the potential candidate early will mean the death of his candidature. "Nanti siang-siang dia dah kena pancung dari dalam dan luar," said our source.

Selangor is a much coveted state.

The Menteri Besar of Selangor post is also a much coveted position in politics but it came with it's own curse. All past Menteri Besar end with controversies.

As an old friend quite familiar with Selangor politics, by virtue of his family being a major player that they could be sometime be in both side of two competing factions, said, "The curse comes with Selangor being a "gold mine" state."

However for Azmin Ali to make such insinuation on UMNO, it is like the headless calling the other headless.

The propaganda generated by the other side is that Azmin Ali wants badly to be the next Menteri Besar. That is the reason he was appointed by Dato Seri Anwar Ibrahim as the Ketua PKR Negeri (State PKR Chief) for Selangor. Can he not be the PKR candidate for Menteri Besar?

It is not because of rumours that the Sultan Selangor is said to oppose any move to proposed Azmin Ali's name due to his moral issue. We know we know ... what inconsistency the opposition supporter may want to reply but please don't say it and put us in trouble. It won't get released in the commentary box.

Let's not speculate to claim that if Pakatan wins, PKR will be insistent and willing to be confrontational with the palace.

There had been speculation that was the reason his Highness was not invited to the Merdeka parade and a certain peliwat is the guess that was given the honour to speak but honoured guest Menteri Besar was only to receive the parade.

It is as though it is a signal from the republican PKR that they are willing to go head-on with the istana and build-up an anti-monarchy movement.

That means despite being Malay and coming from Selangorian parents, Azmin Ali is out of the question.

Azmin was born in Singapore and his NRIC has a code 71 for Malaysian born in foreign land. One former PKR revealed to this blogger that Azmin's position as State Liaison Chief is to enable him to run in two seats for state assemblyman and Member of Parliament.

Anyway his side just revealed a cabinet line-up that he will be the Minister of Home Affairs. Why would he want the Menteri Besar post?

For Khalid, he lost the option of an insurance seat. Thus he has to pick his seat carefully and take care of it.

The odds are Khalid could lose in Ijok. He lost the Indian voters trust when he couldn't deliver on his election promise of land. The Malay votes will likely to remain with BN.

The Chinese could be giving him if DAP could help. However, Khalid's poor service record and absence from his area may affect his chances with the Chinese voters too. He was given a cold reception at last year's Chinese New Year dinner given by him in Ijok.

Talk is he will likely move to another area. One possible area is a BN seat where he is the Penyelaras. But there are issues.

One, the seat is traditionally contested by PAS.

Secondly, he did not coordinate it well and have made quite a few enemies with the local PKR on money issues. It seemed the disheartened group have fled PKR and that diminish the PKR support.

That requirement against code 71 rules out the rumour that PKR President, Datin Dr Wan Azizah will run in Selangor for a state assemble seat and assume the position of Menteri Besar.

It is believed that Wan Azizah was an adopted Korean daughter to Dato Wan Ismail and was adopted in Singapore. True or false, she has code 71 on her IC.

Unless PKR wish to try other Malay candidates, PKR's choice for Menteri Besar is most likely to be Khalid. Forget about his and Faekah's clash with Azmin and his faction. PKR is not likely to put a minnow to defend Selangor for their do-or-die political survival, especially with the prospect of losing 16-17 Parliament seats.

For BN to put Zin, it is similar to PKR proposing Azmin. Not that he also gave his wife/ves to the boss or caught on video being ice cream treatment in a toilet by a lady.

That sort of thing only happen in PKR.

However, like Azmin, Zin is not a Selangor born. He is believed to be born in Muar from Melaka parents.

In the case of Noh Omar, he is better off politically as a Federal Minister.

He is already one of the top winner in the Supreme Council seats. One is being reminded of Dato Mustapha Mohamaed when he was Minister of Agriculture. That portfolio seemed to place Minister high in the UMNO Supreme Council pecking order.

Another pertinent issue about Noh is his combative nature. He is like a lightning rod attracting criticism from opposition and creating controversies of himself.

Mr Bolldozer may have created perception problem for himself with the Chinese for his confrontation with Ronnie Liu on the fisherman peer's issue in Kg Penambang.

However, don't tell me Ronnie would not want to gun him down.

Never rule out Noh. He is merely playing the bad cop role for Najib to play the nice guy role in Selangor.

This MCKK-bred son of businessman, Dato FD Mansor of Glomac is young and have the professional experience.

He is the Deputy President of the Real Estate and Property Developer Asociation of Malaysia. The Group Managing Director and CEO of Glomac also holds important position in Malaysia Australia Business Council.

Some UMNO grassroot downplayed his professional credential as being son of corporate personality close to Tan Sri Muhammad Taib. Nevertheless, he could fare up against Khalid.

Problem is he is not politically popular. It was told to us that in the vote for the G7 to attend the last UMNO General Assembly, he run second last to qualify. He has a bad habit of throwing the Prime Minister's name to often that he is being seen as fake.

But who cares? Make someone a Menteri Besar and instantly he would be the most popular chap in a matter of months.

If Khalid is an example, high position in corporate world may not necessarily translate to the public office and public administration. In this information age, past indiscretion in business practices may come to haunt during election campaign.

Nevertheless, he is still in play.

Maybe Selangor UMNO do not have the perfect candidate but it does not mean it does not have a candidate that is honest, respectable and capable in public administration. They have. Just wait and see.

However, there is one option both sides can look to get leadership talents. That is from the civil service.

One insider blog, Gelagat Anwar disclosed that PKR is looking at the possibility of getting the current state Financial Officer, Dato Mohd Ariff bin Abdul Rahman to run. [Read here.]

Maybe he can attract the support of the civil servants.

Will he get the support if they realised he was a willing accomplice in the State's attempt to takeover private foundation, Yayasan Basmi Kemiskinan?

When it was unsuccessful, he assisted Khalid for the state to illegally confiscate the foundation's land. The Shah Alam High Court just declared it illegal few days ago.

On top of that, he is believed to be cousin to Khir Toyo. Although not as fair skinned, the Javanese complexion is there. So, will they take that risk?

If PKR can think of that, don't tell us that their 'mother party' UMNO did not think of the same thing.

For quite a while, the political buzz was that the current State Secretary, Dato Kusrin Munawi had been approached.

A true professional civil servant, clean and dedicated. Known to be a disciplined and morally strong. In fact, he was a former JAIS Director. And have the trust of the Sultan of Selangor.

It seemed also that Prime Minister, Dato Seri Najib is not keen to risk the political backlash from appointing a civil servant to a political post.

In addition, it may not be politically viable and conceptual right to give a top state political post to a politically untested candidate. A political leader must undergo the 'beauty contest' selection process.
at 10/04/2012 10:53:00 AM

Khusrin may seem like a good choice. After all, politicians from both sides of the divide have something to be talked about. Zin wih his 2 wives, Noh with his 3 wives, Azmin with his mistress, Khalid with 2 wives and scandal.

Maybe a well-respected clean and untested politician seem like the right choice for UMNO. Gone are the days office bearers can make additional income without coming under public scrutiny.

I, for instance, would like to propose myself should there is none most suitable candidate present. Can I?

I have one selangor born candidate. . . Big Dog. However selangorian must tolerate the first MB to call almari as gerobok.

Someone said Hishamuddin is considered Selangor born. Kuala Lumpur was in Selangor during his birth. Another gerobok speaking UMNO member.