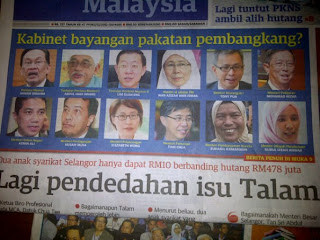 When we received an e-mail of the PKR proposed shadow cabinet, we were having tea with a friend from Utusan Malaysia.

All of us laughed at the idea of Dato Seri Anwar Ibrahim becoming Prime Minister.

Thus it is unbelievable for Utusan to give frontpage coverage to Papagomo's posting. Page 3 or 4 can lah .... but not frontpage. [Read Papagomo here.]

Both us and our PAS friend are aware that Hadi had never specifically endorsed Anwar as Prime Minister. He only said to deal with it when we win.

That explains why Mustafa Ali was upset with Azmin's men Shuhaimi for announcing this list. [Read Outsyed the Box here.]

It is obvious to fortify the public support for Anwar to be the Prime Minister if they win.

Hadi may not give support to Anwar if he does not give any leeway for PAS's Islamic agenda.

Nik Aziz may have given support for Anwar Ibrahim but God knows where is the caveat in his  statement. He could change his mind or forgot what he said or dozed off in midst of being reminded of his past support. He cannot refuse an Islamic agenda if Hadi start to assert.

PAS practises tarkiyah. They do not WYSIWYG. What is that? Go find out.

One thing we are reminded of DAP's Karpal Singh press conference that blast Anwar's morality and 916 stunt. And it was Karpal that raised of Anwar's homosexuality in Parliament in 1997 before it became an issue in 2001.

Karpal Singh maybe his counsel in the recent sodomy II case but there could be more to it.

Giving support to Anwar is in contradiction to his principle on morality of a leader. He is usually uncompromisable on principle issues. Why did he change his stand?

It only means DAP is merely using Anwar for gaining political mileage.

Another fact is that they have mentioned of the rights of non-Malays to be Prime Minister for many times. They are right and it is a non-issue. But it could mean that their support for Anwar is temporary. They would want to have one of their own as Prime Minister.


A shadow cabinet is a group of opposition MPs shadowing the work of Cabinet member to provide check and balance. To finally announce it when general election is looming, it serves no purpose but cheap political campaign.

Just as we described Pakatan's Shadow Budget as meaningless, the same applies here.

Why do they need three Deputy Prime Ministers? Does it mean the order of heir apparent to the Prime Minister is in the sequence of Haji Hadi, followed by Lim Kit Siang and the uncertain third from Sabah or Sarawak? We dare to bet Kit Siang is not comfortable.

All the three Deputy Prime Minister, in which two are already confirmed component party President, are powerless and without a portfolio. What is the purpose of having three DPMs then? Does it take three plus Dato Seri Nizar Jamaluddin to shadow Tan Sri Muhyiddin Yassin?

For a shadow cabinet, why do you need Minister for PM Department? Just put one to correspond the specific portfolio.

Imagine having the Party President of the acclaimed main party denigrated to only one of the minister in the PM Department. It shows Azmin doesn't think highly of his party President.


... if DAP and PAS are also to have equal numbers of Ministers, the Pakatan will have a 60 member Cabinet (20 PKR, 20 DAP and 20 PAS). Assuming PAS and DAP win more seats than PKR then it could be be 20 PKR Ministers, 30 DAP Ministers and 40 PAS Ministers - a 90 member Cabinet. They can have their Cabinet meetings at the Shah Alam Stadium. 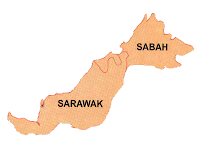 The first comment on Papagomo's blog indirectly asked why the Minister from Sabah and Sarawak is limited to only Deputy Prime Minister III.

Actually there is one Full Minister as in Sarawak's DAP State Sec Gen, Chong Chien Jen for Higher Education.

But why none from Sabah?

Noticeable is the absence of Karpal Singh. He is a major kingpin in DAP, How could he be left out. One prediction of Pakatan's cabinet placed Karpal Singh as Home Minister.

It would certainly be convenient and handy to erase past evidences and stop investigations of police reports. Is it time for vengence?

Don't tell us that Deputy President of PAS, Ahmad Sabu is left to still only do ceramah day in and day out when Pakatan rules. He would want to be a Minister too.

With himself aspiring to be sole Deputy Prime Minister, this Shadow Cabinet is an insult.

Perhaps it is PKR's way of insulting him for his treatment on Dr Mansor and other PKR leaders and DAP Penang's treatment of PKR in Penang.

Why should PKR's Dr Lee Boon Chye be given preference over DAP's Dr Tan Seng Giaw for Health Ministry?

Is the Ministerial position for Pakatan Rakyat women only meant for PKR's Zuraidah "Mat Lampir" Kamaruddin? 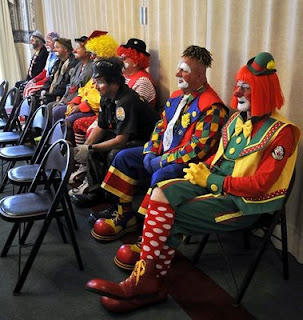 There is a lot more laugh in their list of cabinet members.


Nizar Jamaluddin for Education? This guy is brain dead. He is more qualified to enter special kids class than be Minister of Education. :)

Husam for MITI? Expect many more failed investments, holiday trade missions and non-starter announcements like his highway in Kelantan. Muahahaha ...

Tian Chua for Agriculture Minister? What does a SUARAM activist know about agriculture and rural economics? Kah kah kah ... stunt act on cows?

Elizabeth Wong for Tourism? Turning the whole country into I-City? Make sure she uses the right pictures for Tourism promotional billboards. Hahaha ...

Will she visit the delapidated areas of Federal Territories on her fourth year as Minister like she did at Lembah Pantai?

We can go on and on on the many misfit appointments, rightfully appointed but missing, and the unqualified ones.

It is laughable that UMNO bloggers can spin their own colleagues' spin...

My email source was not Papagomo. You didn't read me carefully, did you?

Too emotional that you unable to read properly.

The writer you thought wrote the list is Salina Tay and it came out on Tian Chua's Malaysia Chronicle.

You thought you read but the PAS man I am taking about is a Hadi man.

Who should I believe.

Any governemnt that will be formed after the coming election which the date is not know yet to this day will be decided by the party who wins. If BN wins they will be decided among themselves by the BN people. Likewise if PR wins they will be decided among themselves also.It is normal for any party to have individual voices inside and outside (which is not the official voice)of the winnig coalition as mere speculation. Everyone like to speculate and allowed to speculate (In fact I am quite amused that the people can speculate as such that look like the PR coalition is going to win the next election by asking and writing on PR list of minister !!!!). If all the party have crazy power member all the 13 States and the Federal G in Malaysia would not be formed today governing each state and the country. But none of that occured and every state have a strong goverment whether it is BN or PR. There will be problem and hickup in forming the government like the case of Terengganu, Perlis, Perak, Johor and Sarawak in the last election but it will run it course and settled amicably among themselves. Speculation is an art form. I like to read about speculation is like mind reading. Anyone can say whatever they want but it remain speculation until proven otherwise.