For those insistent Najib tried to stop investigation 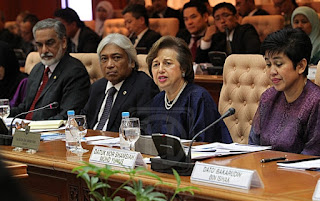 Is this going to be the end of Najib? Are we going to see Mukhriz closer to the office of the Prime Minister? (Dato) Kadir (Jasin) told his friends that this month of April is the final month for Najib.

Now have we not heard this before.


First it was July 2015, then August, then September, then October, then November, then December. And now it is supposed to be April 2016.

But why the hurry?

We are taking excerpt from RPK's The reason for the hurry to finish off Najib".

There is a chronology of event that should be an eyeopener for those still with an open heart for the truth as to why there was the Ops to remove Tan Sri Muhyiddin, replace Tan Sri Gani Patail with Tan Sri Apandi Ali, raid on MACC, "changing" PAC members, etc.

The simple line to accuse of stopping investigation is too simplistic. After being in existense for almost 60 years as a nation, no politician at the helm of leadership will not allow an action that will create such detrimental perception of himself. That is unless something seriously wrong like being set-up.

If Najib has his answers and reasons, where is the proofs by the accusers?

RPK's answer first as to why they cannot wait for the General Elections to remove Najib.


The first reason is they do not want Barisan Nasional and Umno to get kicked out. “But then Mahathir and the ANC are working with the opposition?” you may ask.


... the Bank Negara Governor has only about a month to go before she retires. So, if they want to act, they have to do it within this next month. And that was why Kadir said we do not have long to wait to find out what the secret that he is keeping and which he cannot tell us is.

Sometime last year RPK presented a conspiracy theory of very senior officers of Bank Negara are in a conspiracy to oust Najib. RPK had mentioned the names then.


The very next day, Bank Negara issued a press statement denying that allegation. They then lodged a police report and called in their lawyers for a meeting. The plan was they were going to sue me for slander.

According to my fly on the wall in the meeting room, the lawyers advised Bank Negara to sue me only if they have nothing to hide. However, if their hands are not really clean, then they should reconsider the plan to sue me or else it will backfire.

Bank Negara then made a decision to drop the plan to sue me. So what does that tell you? Are their hands clean or dirty? 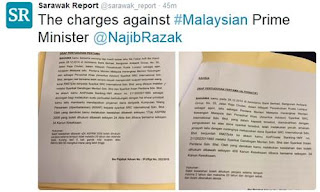 The chronology should be the eye opener for those with an open heart to seek truth and not those talking of truth, righteousness and quoting Martin Luther but to dumb and loyally blind to truly go for the truth.


... on 2nd July 2015, The Wall Street Journal (WSJ) ran a story based on what they claim were documents related to an investigation on RM2.6 billion of 1MDB’s money being transferred to Najib’s personal bank account.

Now, the story was published on 2nd July 2015. So they must have received the documents before that, probably in June or even earlier. WSJ said they have seen the documents and the documents are regarding an investigation by Malaysian authorities.

The Attorney General, Gani Patail, in turn said that he received the documents on 4th July 2015. And that was two days after the WSJ report.

And who gave him the documents? Well, Bank Negara, of course. So Gani received the documents two days after WSJ ran the story, according to the official statement.

And then they announced on 8th July 2015 that a Special Task Force is being launched to investigate the WSJ story. So that would mean no investigation has been done yet. It is only being done after 8th July 2015.

Then, on 30th March 2016, WSJ ran another story, an updated version. And this time they said the USD700 million is US$1 billion after all and that the money was a donation from the Middle East after all. This time they appear to have got part of the story correct and a story very different from the 2nd July 2015 story.

And in this story of 30th March 2016, just like in the 2nd July 2015 story, WSJ said they have seen the documents and the documents are the investigation papers.

Can you get that?


And that is what the police are trying to establish. The prime suspect is Bank Negara. Someone or some people in Bank Negara gave WSJ fake documents on or around June last year and, last month, gave them another set of different documents.

And someone or some people are going to go to jail for this. And the Bank Negara Governor is pissing in her panties because everything leads to her door. And she has only another month to go: either to go into retirement or to go to jail.

So she has nothing to lose. And when you have nothing to lose you have to go for broke. So she is planning to get Najib before Najib gets her. And that is the secret Kadir is talking about. The Bank Negara Governor wants Najib arrested before she herself gets arrested.

Still wondering why suddenly BNM Governor Tan Sri Dr Zeti Akhtar Aziz is promoting and campaigning underhandedly for Dato Muhammad Ibrahim as successor but all the past few years, she never ever pushed him up to the international forefront.

And even in her last PC, it was Dato Nor Shamsiah that was answering her for "information unavailable" questions.

Nor Shamsiah is the one that stopped the practise examining bank as though our Bank can be trusted to self-regulate. How could one trust dealmakers at the helm of Bank management and businessman minded Bank owners to self regulate?

One Central Banker leaked to us that Samsiah is the cause for the weak monitoring and enforcement at BNM. Is she covering her weakness using 1MDB to cover her incompetence?


RM2.6 billion (or RM4.2 billion) is not a small amount of money. How could that huge amount come into Malaysia three years ago without triggering any alarms when just RM100,000 would send the alarm bells wailing like a banshee?

Najib first discussed this matter with the Governor and after explaining where the money is coming from and what it is for, the Governor advised Najib to place the money into his personal bank account. It would be less complicated for both Bank Negara and the Registrar of Societies if the money did not go into Umno’s bank account.

And that is what the police are going to report. So, if Bank Negara says otherwise, then without a doubt they are trying to set Najib up. And instead of the Bank Negara Governor arresting Najib, she will end up getting arrested instead.

And that, dear readers, is why they are in a hurry to get Najib — because if they delay too long they are going to end up in jail instead. So, Kadir, that is the secret you are keeping which you cannot tell us, right?

Oh, sorry, have I stolen the thunder from you?

No one inside BNM can be trusted.

Bring back Dato Dr Awang Adik. So what he is a politician. All World Bank are involved in US politics and defense.

So he is now a diplomat. That is emulating the doyen of integrity, Tun Ismail Ali. Awang was already groomed for the Governorship position way before Muhammad Ibrahim. Remember that Awang was Director General of LOFSA?

It could be Irwan but too many Geng Loceng in high places already. Whatever it is, as long it is not a fee seeking dealmaker Investment Banker that started as a phone operator stockbroker feeding on breadcrumbs commission. Even an economist can give 2 projects to husband.

Another theory going around is that it is Tan Sri Gani Patail is going to squell. If so, it should be interesting. Remembered Tan Sri Abu Talib making a statement that Gani should not be part of the illegally established Special Taskforce he set-up.

Why did he say so?

A latest incident in the court that may have missed everyone attention is Dato Rosli Dahlan managed to get MACC and government to apologise. It has implications including Gani's application to the Bar.

The person believed to be a proxy to "RM27 million of illegally obtained money" and believed to be part of the set-up to create perception of RM8 billion MAS lost was earlier acquited. Many parties sued by Rosli including Tan Sri Musa Hasan and media have apologised.

Are there other cases of perception, diversion, set-up, and incompetence like what happened to Dato Dr Khir Toyo, Pulau Batu Putih, PKFZ, Anwar's black eye case and many others?

Off course, another theory will be on PAC's report. How will ANC spin?

bro, again, who is this rpk u speak of? do u really think the doj and the rest will take into account what he writes? instead of addressing what happens inside, why not he try to address the supposed "instead of 1 billion we think its closer to 4 billion" by the foreigners?

the thing is, this is no more a local problem. and its not that we have no "open heart" to seek the truth, but real issue is "cash is king" which drives even the most "open heart-ed" to the edge of stupidity.

clue: look in the mirror bro

I do not know who you are to address me as brother. State your view coz you are saying nothing but mere cliche and trolling

The onus on accuser. He cant explain the 42 billion and then keep changing his numbers 5 times. Now he wants to accuse for a larger amount of 50 bil.

He has got many of his facts wrong repeatedly. Maybe he is confused between 42 billion lesap and 50 billion liability.

And you trust his words? Whats wrong with you?

The 4.13 fella is only interested in perception. Not the truth. Must be geng loceng coz he thinks he is winning by getting international attention. The facts is not of his interest.