Relief for Guan Eng, but how about for Tony Pua? 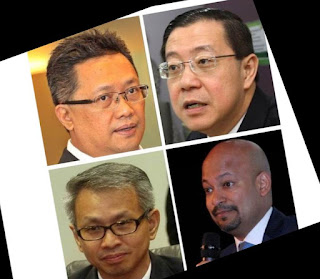 There will be no Rahman Dahlan-Guan Eng debate ...

That is the advise of police chief, Tan Sri Khalid Abu Bakar and MACC Director Dato Azam Baki. TV3 announced there is no debate. It is a relief for Lim Guan Eng as our previous posting argued.

In the meanwhile, Arul Kanda has accepted Tony Pua's challenge.

Tony Pua thinks he has got the 1MDB issue cornered with the latest development on IPIC and Aabar and his alleged missing USD7 billion. He will be surprise as Sarawak Report itself has admitted it as a non issue though still trying to point blame at Dato Najib.

Some commentator was thinking this blog was stunt by this development and not able to reply. On the contrary, My Dear Watson. Why comment over recycle allegation? Didn't 1MDB answered already last year?

Stay tune for tomorrow's posting as we comment on the PAC and the post PAC episodes. May there is some hope of enlightenment. The pentaksub ANC will never buy into it. Orang tidak dapat hidayah memang susah hendak beriman. 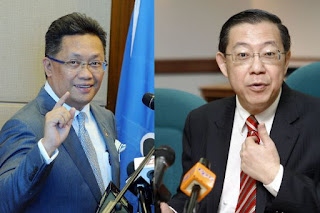 KUALA LUMPUR: Inspector-General of Police Tan Sri Khalid Abu Bakar has urged all television stations to cancel the proposed live telecast of a debate on the Taman Manggis land issue as the case is under investigation by the Malaysian Anti-Corruption Commission (MACC).

He said if the debate between Urban Wellbeing, Housing and Local Government Minister Datuk Abdul Rahman Dahlan and Penang Chief Minister Lim Guan Eng was allowed to take place, it would affect the investigations and prejudice the witnesses and the case.

"@PDRMsia agrees with @SPRMMalaysia, the Manggis bungalow debate should be cancelled. Police investigations are still ongoing. Key witnesses, including the Chief Minister have not been called," he said on Twitter on Friday night.

Khalid tweeted: "@PDRMsia asks all TV stations to cancel the live debate before the case is settled."

The network, which was originally supposed to televise the debate live on Apr 19, backed down after taking into consideration the views expressed by Inspector-General of Police Tan Sri Khalid Abu Bakar and MACC’s investigations director Datuk Azam Baki.

He said a new date for the debate would be announced later.

That is a much needed relief for Lim Guan Eng and DAP.

What's out there is still not explainable, let alone defensible. Believe that the link between Lim Guan Eng and Pang Li Koon has already been  established. It will only surface somewhere and somehow near the time of the debate. 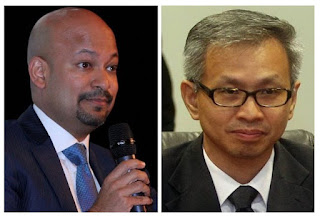 In the meanwhile, Tony Pua was adding on to P Ramasamy's diversion for Guan Eng to challenge Arul Kanda him to a debate.

He must be thinking he has an upper hand in the 1MDB issue with the development in London and the new twist to his recycled allegation with a USD7 billion missing. It is still short of Tun Mahathir's RM42 billion allegation.

Arul has responded with sinister remark of Tony:

In a statement on Friday, Arul Kanda questioned the Petaling Jaya Utara MP's remarks calling him a liar and asking him to resign from 1MDB just hours before issuing the debate challenge on Thursday.

“It is clear that YB Tony is confused and contradicts himself. He does not know if he loves me or hates me.

“He says I should resign, then says I need to stay on and debate with him,” he said.

Arul Kanda also said that he hopes Pua, who is a member of the PAC, had consulted the Parliament Speaker before issuing the challenge.

“To avoid being embarrassed a second time, I hope YB Tony has first checked with the Speaker of Parliament before issuing this debate challenge,” he said.

Arul Kanda said that despite questioning him for two full days at the PAC hearing, Pua still wanted “to spend quality time” with him.

“Far be it from me, to deny YB Tony this pleasure.

“I hereby accept the debate challenge. Bring it on!” he said.

On April 7, the 106-page PAC report on 1MDB was tabled in the Dewan Rakyat.

This is the second time Pua has challenged Arul Kanda to a live debate over 1MDB.

Dewan Rakyat Speaker Tan Sri Pandikar Amin Mulia had said that to safeguard Parliament’s integrity, Pua should first resign from the PAC if he wanted to debate with Arul Kanda.

When Arul dare to take the challenge, it only means he is more than ready and has materials that would embarass Tony on national TV. Unless Tony badly need to be embarassed, someone need to provide him some face saving passage out of this debate.

Tony Pua maybe the politicians, vocal in Parliament and DAP's propaganda chief. He thinks he is good but he is neither a good debator or a communicator. He will get creamed by Arul.

When he speaks or raise an issue, Tony is usually convulated with facts that he can't communicate his points right or throw the right punch. It is as though he thinks he is talking to an intelligent Oxford crowd capable at digesting facts at one go. The general public hardly understand him.

It is not that he has yet to find a silver bullet that will deliver the final blow. He will never get find the bullet because he has no idea of the audience he is talking to.

He thinks his spin on an issue is sensational enough like the new spin of USD7 billion missing. Too in love and overawe with himself.

See how skilful trained lawyer and champion debator Arul Kanda explained and wiggled out the difficult questions posed by Syed of RTM with confidence and in easily understandable points:


Odds are stacked up against Tony with the latest from Saudi Arabia absolved Najib again for the RM2.6 billion:

The Najib side is not just defending but attacking to demand a Mahathir apology. The upper hand is moving to Najib.

And with Dr Tan Seng Giaw statement below, ANC and opposition's faith is sealed.


If he said there exist no evidence pointing towards Najib, it is too late for him to clarify many days later that certain evidences or documents are not available. After all, it is common, be it in court or parliamentary proceeding or other other official occasion, that documents and evidences are not complete.

They did try to highlight Najib's signatories but it is no end game. Maybe it is useful in the court of public opinion dominated by the ignorant and easily swayed by propaganda. It can be easily explained and argued back thus an easy comeback to do.

Sebab nila setitik rosak susu sebelanga. On the other hand, jangan pula marah nyamuk, bakar kelambu. All within the right perspective and context.

Anonymous said...
This comment has been removed by a blog administrator.
9:13 PM

You wrote I don't dare?

Maybe you comment on the wrong post. Actually we did release since you rubbish other blogs affair here. And they are our friends.

You should have plainly state your opinion. Too difficult is it to understand commentary condition?