As of tonight, Lim Kit Siang's blog team dedicated four postings with their typical paragraph long titles on the latest revelation by the IPIC announcement to the London Stock Exchange [read here, here, here and here]. 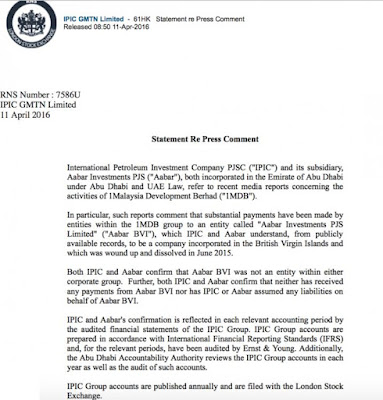 They must be thinking 1MDB is cornered and the bogus and fraudulent company, Aabar Investment PJSC Ltd (Aabar BVI) will expose Dato Najib's scam to embezzle money from 1MDB.

Sarawak Report highlighted extracts of the PAC hansard where Tony Pua was trying too hard to corner Arul Kanda in his questions and place the blame on him.

However, the same SR posting could only attempt to implicate former Aabar CEO Mohamed Badawy Al-Husseiny as the signatory in the incorporation of the bogus BVI company.

Arul is not wrong to stay put by insisting 1MDB made the payment as requested and dealt with the Aabar and IPIC top executives.

Tony was overzealous with political sensationalism to blame and subsequently, repeat the call for Dato Najib resignation. No wonder he has yet to find the closure silver bullet to an issue he dwelled on for the past two years.

His problem is premature ejaculation. Shooting off too soon. 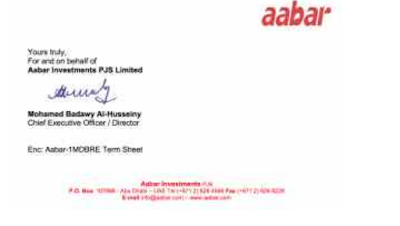 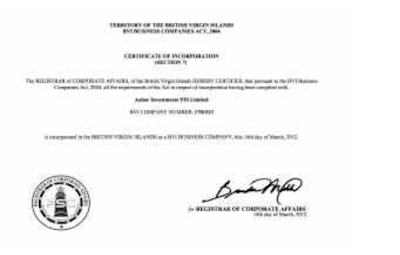 It is unclear what Mohamed Badawy signed at the top and what was is the lower document. Another typical SR spin?

While, the email version below added few other documents: 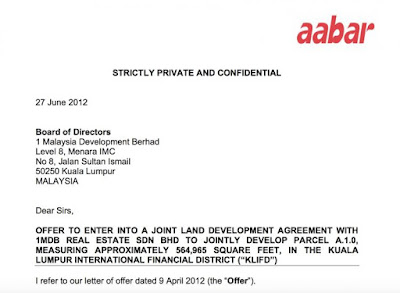 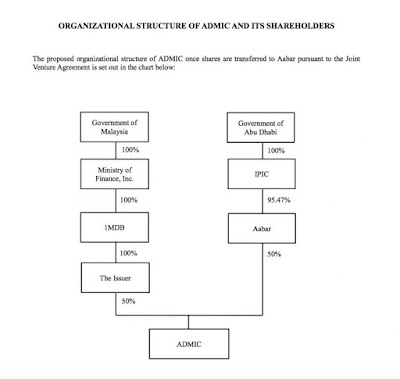 SR went at length with highly technical stuff on the joint development offer but it all involved Aabar proper. Does it mean anything to issue raised by Tony?

The given documents, which is still not subjected to any verification, only indicate the former Aabar CEO may had a hand in the establishment of the Aabar BVI.

The opening line of the Ap version of SR emphasised that point. 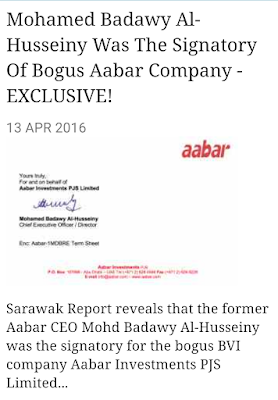 Even the collusion with his Chairman Khadem Al Qudsi was not established but merely suspicion. And, there are many other unverified claims and links by SR.

It only highlight the need to be judicious in accepting what is written by SR.

For Tony to try lay blame on Arul in the PAC proceeding, could he not fathom that it is easily dispelled?

All these happened during the tenure of Dato Shahrol. Furthermore, PAC came to a consensus to recommend further investigation on his conduct as CEO.

Tony was a signatory to that consensus though he changed his mind upon realising he lost the political mileage thus say he is only 80% satisfied. His remaining 20% is concerned with unavailable documents.

If documents are complete, Tan Sri Gani Patail would not have lost Pulau Batu Putih at the ICJ. At least, 20% of cases in court and various official proceedings would have a different conclusion. So, it is nothing unusual. It is only wrong should the documents are intentionally withheld.

The practise of PAC is for those with dissenting views to prepare a minority report. Unless Tony did so in writing, this is all political wayang and grandstanding. The proof of Tony's political intention lies in a new spin to say USD7 billion is "missing" and unaccounted for.

It turned out the sum is for below: 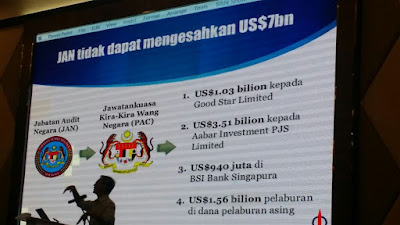 This was at the empty do in Shah Alam last week: 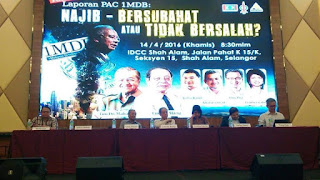 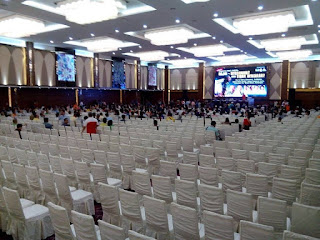 So the Good Star money is no more USD691 million? USD3.5 billion is under scrutiny. USD940 million at BSI is part of the realised investment from Petrosaudi.

USD1.56 investment in foreign fund. Is BSI being double accounted? Would love to hear Tony mentioned names because it can be linked back to Lim Guan Eng.

This would also be a turn-off for Tony.

Limbang MP Hasbi Habibollah was reportedly quoted of saying, "The PAC report finally proved that all money and funds (of 1MDB) were accounted for and all transactions have been verified. No money or funds have gone missing. It was also proven that there was no element of crime or misappropriation of funds as alleged."

Tony did not dispute this so his intention can be easily gauged. Sometime ago, WSJ made the following chart: 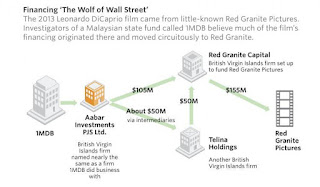 According to WSJ, in which it is better not to believe any evil Rupert Murdoch's newspaper, the allegedly funneled money via Aabar BVI ended up in Red Granite, the production house where Riza Aziz is a partner.

WSJ is rewriting the same unsubstantiated allegation that was written extensively by SR. The claim Jho Loh had a role in assisting Riza to raise financing of the award winning film, Werewolves of Wall Street.

Red Granite denied the allegation. So did 1MDB who denied funding Werewolves.

Tony Pua is too "gelojoh" (reckless) and "gopoh" (impatient) to link it to Taek Jho Loh, Datin Seri Rosmah and her son from a previous marriage, Riza Aziz. Kesian Missus.

So happen the Deklarasi Rakyat coalition for the unconstitutional overthrow of Najib is waning in support and marred by in fighting. An unlikely outfit to undertake reform with Tun Mahathir at the helm. He is more into preserving his "legacy" and still could not come to term he is no more PM.

Few commentators couldn't resist the temptation of applying that same conspiracy theory and assumed this blog was stunted and devoid of any points to answer for the recent development. Recent it is not. Aabar BVI is a recycled story so why need to comment.

It is indicative that substantial number of Malaysians, especially among the anti Najib and opposition may be suffering from premature ejaculation.

To keep their propaganda of blame going, they have to be quick to presume and as shallow it could be, simply draw any defamatory conclusion. 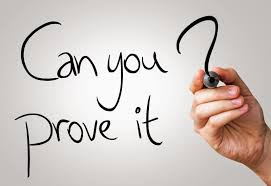 What need to be done is to prove that 1MDB under CEO Shahrol was aware of the bogus Aabar BVI company and yet still proceed to advice PM to allow remitting the money.

Or more sensational is to prove that Najib is aware of this bogus company but still proceed. Off course, they still need to conclusively prove Aabar BVI was a fraud.


Like the allegation Good Star was a conduit to siphon US681 million of 1MDB money was siphoned to Najib's personal account, the facts need to be establish first as to who owns Good Star. Show the documents with the list of shareholders.

Hopefully he can keep up and stay current with issues. It is far from possible for him to proof his allegations as his political direction seemed clueless. [Read comments on TSMY here, here and here] Sad ... should have heed advise.

What majority people believe or perceive is of no consequence. They may not be following the issue closely or have too many missing links in their understanding.

If the anti-Najib campaigner and opposition wish to do a propaganda to promote the WSJ chart, the least they could have done was to begin with a foreplay. It needs the right level of excitement and anticipation before more penetration with exposures of more sordid details.

However, if they wish to deal in the truth and justice, it is already a wee bit too long to await for them to lay out the evidences with facts and figures.

With the old man still wrong in his latest RM50 billion liability instead of RM42 billion missing, only indicate they may have none.

1. 1MDB is Najib's agenda such that full authority and approval must get his blessing and approval;
2. Najib did signs a lot of documents in respect to all the JV and investments
3. A lot of money from 1MDB have gone missing and unaccounted to bogus company as admitted by the CEO (USD3.5 billion is a start, units in Brazen Sky is questionable)

The facts to be established:

1. 2 executives of IPIC and its subsidiaries are the one that is responsible in the bogus company;
2. They are in cohort with Shahrol;
3. Shahrol bulldozed his Board because he has the blessing from the one and only person that can give approval for the investments done by 1MDB i.e Najib Razak;
4. No court of law outside Malaysia will take the defend by Najib that " i am not aware of anything but i sign the documents". That statement is only valid in Malaysia and thus by a lot of bad politician;
5. The Swiss authority, (not only WSJ and SR) has given a clue that the money that was siphoned out from 1MDB managed to sneak out to Riza's production house (or maybe you can say that the Swiss authority is also under Murdoch's influence);
6. SRC money was indeed siphoned out and ended up in Najib Razak's Ambank account;
7. Najib Razak indeed used that money for his personal gain;
8. 1MDB money indeed siphoned out and ended up in Najib's Ambank account;
9. Najib Razak indeed used the money for his personal gain;
10. The money from that account was transfered to an account in S'pore and was frozen;
11. The money was not returned back to the donors but was transfered to Najib's related account
12. There are enough evidence of money trail to execute Najib, Rosmah, Riza, Jho Low etc
13. All the evidences are now with the authorities in the US, Swiss, Luxembourg, Hong Kong, Singapore, Australia, Abu Dhabi and of course Malaysia
14. Except for Malaysia and Australia, the rest of the authorities mentioned above are now in colloboration lead by the US.

Vincent Ang said...
This comment has been removed by a blog administrator.
11:19 AM

Well, who knows? Maybe the Arab set up the company and signed the document upon advised by Jho Low with Najib blessing.

If you cannot answer them just shut the f....up!!

You are sounding like SR, WSJ and other Rupert Murdoch media, The Edge and ABC Australia, all in one.

1. 1MDB is Najib's agenda such that full authority and approval must get his blessing and approval;
2. Najib did signs a lot of documents in respect to all the JV and investments

Is it sufficiently CONCLUSIVE LEGALLY to assign blame on Najib and only Najib without existence of any other possibilities to be considered as FACT?

And you also said

3. A lot of money from 1MDB have gone missing and unaccounted to bogus company as admitted by the CEO (USD3.5 billion is a start, units in Brazen Sky is questionable)

Could you quote which is the authority that affirm and confirm stmt #3? Surely the facts must not be reports by Sarawak Report or WSJ or the likes.

And you agreed there are 14 facts to be established.

Good luck to anyone out there task to prove the long list. All must be conclusively proven or the links broken.

so far what has been reported in SR, WSJ and the Edge are not far off from the media statements by Swiss Authority and announcement by IPIC.

bring the pop corn, and dust the sofa.

this is entertainment at the highest level.

somebody is going down....BIG TIME!

Let's face it: nothing ever happened, no money went missing, nobody signed anything, 1MDB is healthy and making lots of money for the nation. Everything is hunky dory. On top of that we have friendly countries willing to donate millions of dollars to us to fight the common enemy.

We should all just shut the fuck up!