Will Sarawak Chinese care about 1MDB or CM? 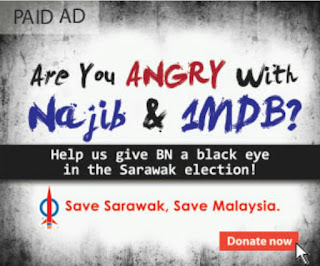 This was an ad found in Malaysiakini in one of the reports they are trying hard to intensify the current problems related to Aabar BVI.

Though DAP Sarawak is working hard to give the impression that they are an independent thinking entity within DAP thus not an extension of a Peninsular party, it would be the political campaign they have to take.

They are not likely to lead the next government in Sarawak, especially with the intensive dispute for seats with ambitous but unable to deliver PKR. The more realistic target would be to help central DAP to topple BN using the 1MDB issue that is currently tarnishing Dato Najib.

From conversations in Kuching and Miri yesterday, 1MDB is of no consequence to the voters. In fact, Sarawak rural voters and certain circle of business people benefited directly or indirectly from 1MDB's CSR and investment.

In the latest development on Aabar BVI, Arul Kanda appeared on Bloomberg TV the day before:


It is was the interview Arul described the unexpected IPIC move as a tricky curve ball thrown from a baseball pitcher.

He said there is "more than meets the eye". For instance, the royal family of UAE is directly involved in administration and business so their decision making practises are individually driven. Any resolution needs diplomacy and some tact.

The current issue is basically a contractual dispute and Arul gave assurance there is no default and bailout. 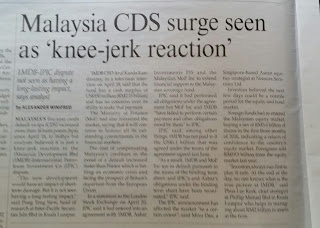 Such consoling words may not likely be well received by Sarawak Report, WSJ and oppositions whose determine to maintain pressure on Najib.

If 1MDB does not sink in with general Sarawak voters, GST is hardly an issue that affected voters sentiment against the ruling party in Sarawak.

It seemed strange but it does not quite sink in as it does with common folks in Peninsular Malaysia.

A friend whose been working in Miri said, shopkeepers and dhoby operators are cooperative and do not attempt to evade GST by non-issuance of receipts. 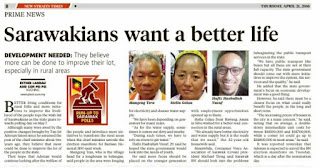 It is believed to be a direct impact of the commonly seen Kedai 1Malaysia, Fair Price Shops, RTC and other social programs of the federal government that is beginning to reach the people in Sarawak. 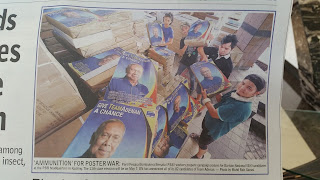 In the last election, SUPP was hit badly in Miri that they lost all the urban seats and former President George Ting lost.

Thus far confirmed, Pujut looks set for a takeover. Piasau not sure yet. Senardin near impossible. Still have to.wait for campaign.

There is a feel good wind for Adenan among the Chinese common folks in Miri. It is difficult to acknowledge the latest Merdeka Report. If MSM is comfortable to publish, there could be some truth: 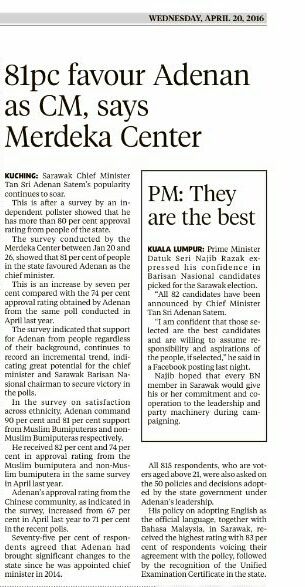 However, it is still to early to claim Lim Guan Eng's political rally in Sarawak is not attracting much crowd.

DAP is known for their capability to build up a wave of support as polling day nears and create an avalanche sentiment.

The real political influence and power behind the throne remains with the super rich tycoons. 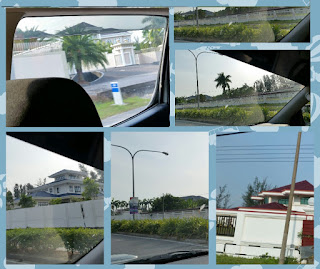 In Miri, their big with huge acreage compound homes can be seen lining along the beach road on the way to Bintulu.

Adenan assured the Big Six timber concessions to remain under BN. A subtle reminder to the SUPP funders to work harder and stop quarelling for the time being?

On the BN side, there are dissatisfaction similar to the dispute between DAP and PKR.

DAP has done work to penetrate the rural areas thus believe that they could perform far better than PKR's past disaster in the last state election.

Furthermore, PKR Sarawak lack the fund and organisation to make in-road. They are in-denial to the reality that PKR Sarawak practically do not exist any more.

The problem with the BN side relates more to the long internal issue of SUPP that ended with the influential Foochow clan leaving the now Fukien and Kek controlled SUPP to join a new party, UPP.

As one Chinese political operator described, the root cause goes back to the 5,000 year old rivalry in China.

Though Adenan has decided on direct BN candidates as the solution after SUPP are unable to come to a soluton for the election, disgruntled voices could still be heard from SUPP.

When the dispute became untenable resulting in the break-up, it was SPDP that was first shaken as then President Tan Sri William Mawan and other MPs and State Assemblymen resigned to form BN supporter Teras.

There were also exodus from PRS.

However, that could be mere lip service as grouses can still be heard at the ground level. A top SPDP official quit the party to run as independent in Mulu.

For instance in Bekanu, 45 miles away from Miri, where we were last night, SPDP is not happy with the BN direct candidate. Two independents expressed interest to run in Bekenu and Lambir, another Miri seat. 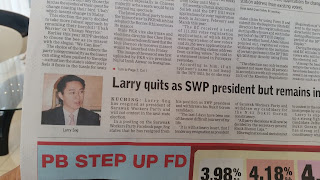 Larry Sng's resignation from father, Dato Sng Chee Wa's party could be along the same theme. Maybe returning back to Sarawak BN as direct candidate?

Son, Larry was a former state assemblyman and worked for Pehin Sri Taib Mahmud in his last years as CM.

1MDB is no issue too 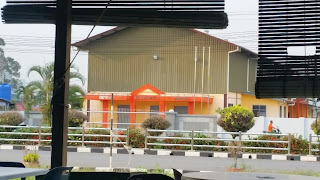 Bekenu is a small fishing village but is being referred to as a town after new shophouses built. 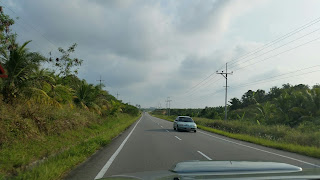 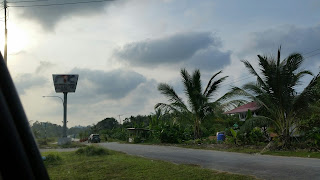 Apart from the traditional activity of fishing, the is oil palm cultivation and it can be visibly seen along the main road.

There are several plantations in the area. Most of the local issue here relates to NCR and the dispute oftenly involves plantation companies.

At the same time and it was a campaign issue in the last general election, Baru Bian represented Rimbunan Hijau to forcibly encroach into land grant issued to other Sarawakians.

The local native of Bekenu or the Sibuti district is the Melanau and Kedayans. The Kedayans refer to themselves as Brunei Malays. The whole of Sarawak.was originally part of the kingdom of Brunei.

Historically, as written in Borneo Post here, the Iban were invited to the Sibuti district by the White Rajah, James Brooke to cultivate rice for the area.

"Today, the Kedayans, Malays, Melanaus, Chinese and Ibans live harmoniously in their settlements where, as a shopkeeper notes, everybody knows everybody."


The weather was extremely hot yesterday. It was hazy from open burning.

There is hardly much rainfall in the area for the last six months. If there is any rain, it is short lived. The area relies on river water for agricultural irrigation.

Thanks for pointing out the mistake.

A small correctable factual mistake does not make the rest of this posting rubbish.

Would have publish comment if not for the nasty remarks.