Nazir is unfit to assume positions in CIMB, Khazanah and BNM 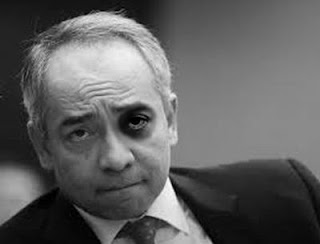 An issue has to be seen from the perspective of the facts of the issue and nothing else. His relation to the Prime Minister is of no consequence. That maybe unrealistic to ignore but we are not insulting the PM.

This blog have been critical of Nazir so nothing and no one will hold us back from calling for his resignation as CIMB Chairman, and member of the Board of Director of Khazanah. The Wall Street Journal made a revelation and Nazir admitted.

It does not matter that Nazir is close to Bank Negara Malaysia Governor, Tan Sri Dr Zeti Akhtar Aziz. He not only should not be considered for the position of BNM Governor, but should be investigated.

And, never ever should he get to be Minister of Finance.

This is no more the first cabinet of Malaya where brothers can be members of the cabinet. Malaysia should be beyond such feudel thinking.

That become the first reason among "99 dalil" to insist for Nazir's resignation from all government appointed position.

He should not have been appointed to the Board of Khazanah Nasional since he is the youngest brother to the Prime Minister. There lies the conflict of interest.

2. By acknowledging the WSJ report that he had received and distributed fund from Najib's bank account, he has revealed on a client's account.

Bank Chairman Nazir has flouted BAFIA and FSA rule for banking confidentiality and should be investigated.

3. He acknowledged that the money was transfered from his brother's account into his account and then transfered to the assigned recipients.

If it is an illegal act or as he puts, he is not sure of it's legitimacy, then his professionalism is in question. As banker, he should have done his due diligence. 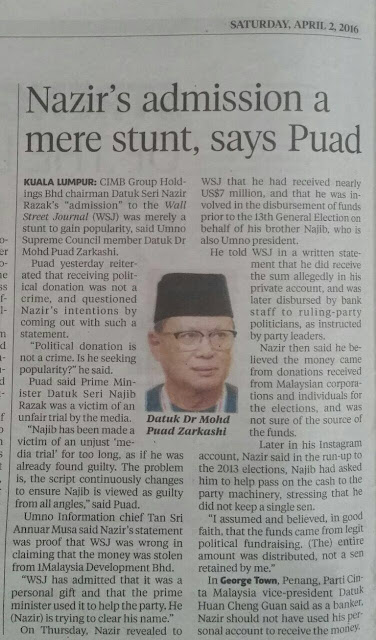 5. Puad Zarkashi is right to assume Nazir is doing a publicity stunt.

It was reported that "he believed the money was from donations he helped to raise from Malaysian companies and individuals for the election."

Nazir raised the fund but not taking responsibility and now finger pointing to pass blame on others. He is irresponsible and unfit to look into government and public interest.

6. Since Nazir claimed the money may not be legit, then he may like to reveal to the public in the name of transparency, and accountability as to who are the "duo entrepreneurs" that gave the RM30 million "now everyone can donate".

Why are they not ligit and why did he took the money?

7. Are the "duo entrepreneurs" his banking clients in which CIMB has a big lending exposure thus need to ensure they are afloat?

8. Is the money raised by Nazir for favours to secure licences for "low cost banking" and "low cost insurance" till all legacy financial institution end up closing like GrabCar doing to traditional taxis?

9. Are the "duo entrepreneurs" sincere in their donatio?

Do the donors secured by Nazir's expect his RM30 million to be given special treatment as though the Geng Loceng donated RM3 billion just because he is Nazir's friend?

10. Is the money donated with the intention to position themselves when Nazir is appointed as BNM Governor?

The "duo entrepreneurs" could set monetary policy and regulations for the banking and financial institution in the manner they did an industry rationalisation plan during Pak Lah's time that favoured them heavily?

11. Talking about finger pointing, this is not the first time Nazir Razak have been passing the buck or more precisely, passing the shit he made to others.

He screwed big time in the management of CIMB and passed the buck to Dato Tengku Zafrol. [Read past posting here]

12. As CEO for 15 years, why should be be made Chairman by Khazanah Nasional? When he "fucked up" at CIMB, he should be treated like all other expired CEOs which to be given the boot!

13. Why did BNM allowed him to be Chairman of CIMB?

This is a decision made without consideration for the public interest and smooth running of public institution. It made life tough for the new CEO to address past problems and institute new policies and measures without Chairman intervention.

It is in the same manner Tun Dr Mahathir is intent on toppling Najib for addressing legacy problems.

14. He is Chairman of the Executive Committee of CIMB and it was publicly announced as so.

BNM is very clear on the rule that Chairman must be non-Executive and ideally it should not be former, and long serving CEO either!

Why is this special favour to Zeti's close friend?

15. With Nazir strong grip on CIMB management, he should not be appointed on the Board of Khazanah. They are the biggest shareholder in CIMB thus it is a conflict of interest.

16. The biggest conflict of interest is Nazir and wife ownership between them of about  50 million shares in CIMB which is worth approximately over RM200 million.

This is on top of his RM10 million plus other perks which is way above average GLC pay!

17. Nazir has not been truthful and honest in his decision and comments. He gave negative comment on a government company just to divert attention from his problem at CIMB.

18. Nazir is being emotional and unprofessional. His open remarks against his brothers are too personal. It goes to the point that it is out in the open [read Asia Sentinel here and here].

If that is his attitude, then he is psychologically not fit and unstable to fulfill his duties and obligations in government companies.

He cannot put aside his personal issues from his responsibilities. The country cannot be run as a family fiefdom for him to run tantrum as he wishes.

19. As a professional serving the government, it is unbecoming and rude to slant past insults like "Even my teen son can tell 1MDB bad news", "Malaysia in the ‘darkest’ of times", "Malaysia sliding into ‘a game of thrones’", "1MDB - never again", and various other politically motivated comments.

20. It is highly improper that he ruined the country's image by making dispraging remark on the country like mentioning "Malaysia’s sovereign credit rating deserves to be accorded “junk” status" at an international conference with the presence of foreign investors.

Is he so dumb to not see the insidious intention of WSJ, FT and NYT?

21. Nazir has been open to rubbish his brother's leadership and dabbling in politics by "talking" to Dato Saifuddin Nasution about starting a political party or political NGO.

If so, then he should resign from all government executive positions and most welcome to.enter the ring.

22. For someone whose been given deals on a silver platter, Nazir should know where his situation is. He changed CIMB to a fee-based income organisation by getting fat fee government deals.

Many of the deals do not have sufficient commercial justifications and even led to the ruin of government own companies.

He should prove his mettle out there beyond the comfort of political and family connection. Try make it out of Malaysia.

There is 77 more dalil to go and we are due to meet someone.

It is not difficult to fill-up.

Just go through his deals like MAS-Air Asia merger, MAS rationalisation, Sime Darby-Guthrie-Golden Hope trimerger, Sime-E&O and many many more deals made justified by the fee and commision for CIMB and Nazir than the economic or socio-economic needs!

early 30's ceo of a major bank, anybody out there think he got it on merit?

Been telling everyone if he is not the son of Tun Razak ..he is definitely worst of then most of us. Merit ?? Its a joke of the century

What is the issue all about?

So there is some truth to wsj relevations after all. So now it comes to the question of MORAL INTEGRITY and we will see what kind man he is or is not. We all know who is the is not.

The N in Rahaman ia actually Nazir not Najib haha..
These two brothers have been robbing the Malays from Pak Lah time.
We Malays must get rid of these thieving brothers.
They dont do one honest day work. Just stealing commission from malays as investment bankers... investment bankers are just another word for robbers in the west..

There is no "SO there is some truth in WSJ ..." There is just no truth in WSJ these days. In fact, they are doing copycat of Sarawak Report story. Thus no issue of moral integrity to talk about.

One can say "IF there is some truth in WSJ ..." Nazir tried to wiggle himself of responsibility. Why? Then is it so? And many more questions to get the story right.

The line of questions and answers have to be clear before you come to a "SO" to conclude.