Supposed it is Wahid Omar instead ... 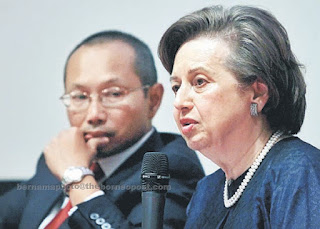 Thought a light casual Sunday posting on Dato Dr Awang Adek's return back to Kuala Lumpur would remain as it is, light and casual.

But, no ... we were beseiged by SMS, Whass App meesages and calls from friends expressing reservation.

It went till late into 2:00 AM intersperse with other conversation on Johor politics and Ibrahim Ali trying to run on PAS ticket for Pasir Mas for next GE.

Excuses range from too many Kelantanis in civil servants, him being a politician, and resemblance to a cigar chomping Rani Kulop in suits.


It is not Malaysia without accusations of Awang did this and that at MOF, KKLW, TNB, and various outfits till his short lecturing stinct at USM.

Quite sure the allegation will fall to pieces the moment details are sought and logic disputed. Does not need to even talk of evidences.

One Geng Loceng cannot not express a four letter response. In fact it was two words into one.

Must be from poor upbringing. Otherwise, he would not have back a hypocrit who made a RM42 billion lie and seek for foreigners to re-colonise the country like the history of Malayan Union he loves to repeat

Anyway it is not a confirmation. Just pulling the legs of Kelantanis friends and ANC pentaksub Zeti chapter.

Saw somewhere one oppo portal had at one time predicted it to be Dato Abdul Wahid Omar. The posting title predicted Wahid but posting conyent was doing copy paste of news from media.

Yes, supposed it is Wahid Omar. Whay say you?

He is a competent banker. Maybank did way better than silver-trayed CIMB.

Honest, Mr Clean and by the book chap. Good fearing and pray 5 times a day Muslim. No questionable stories of him.

A man of humble background from Kamping Melayu, Johor Baru and has not forgotten his roots.

He is unlike other Governor with Johor roots. There were quite a few.

While, Zeti is a truly Johor aristo family that dominates Johor corridor of power and academia. Her family members are practically the whose who of Malay politics, civil service, millitary, academia and business.

Save for Tan Sri Ahmad Don from humble Pontian but illustrious MCOBA.

There is another accountant as in Tan Sri Aziz Taha. Seems to be a favourite of Tun Mahathir at one time. Just kidding.

And Wahid follows another precedent of former EPU head being appointed Governor.

With exposure in banking, economic management at EPU and managing corporations, it will be useful for the governorship position.

Najib could free one Minister position to push someone able to develop new economic sectors of growth and the ecosystem.

Should it be Wahid, it will be something to be proud from an Alumni whose members are dying breeds and not increasing in numbers.

Who knows the next Governor too could also be from Maybank and ANSARA Seremban.

Wahid is the most qualified. But infortunately it will either be awang adek or irwan serigar. Both are the closest to najib. Najib has the tendency for picking up the least qualified for important post.

Interesting comment but made at wrong posting. Not posting on 1mdb ...