Guess whose back to KL? 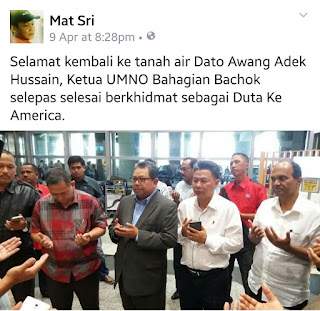 A diplomat finished his term abroad and returns home.

Since he is a politician and UMNO Division head of Bachok Kelantan, there is reception for him at the airport.

It is quite the usual ritual of welcoming a "party boss" back.

However, a few Kelantanis were excited with this development and viral the above Facebook posting. Wonder why are they excited? 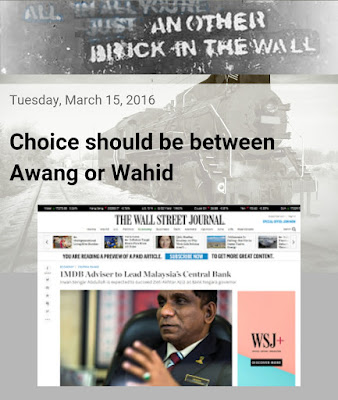 It's really no big deal but this blog did put up a posting to suggest or predict that the next Bank Negara Governor should be either Awang Adik or Wahid Omar. [Read here]

Dato Dr Awang Adik was earlier groomed for the position, before Dato Mohamed Ibrahim. If anyone remember, he was a Director General of LOFSA.

Ibrahim may have gone to Harvard. But Awang is no small change. He went to the same Alma Mater as Zeti at Wharton @ University of Pennsylvania, Philadelphia.

Zeti and a certain foul mouth banker have been lobbying hard against Awang by using the excuse it should not be a politician.

But through years, no comment heard of ex-politicians like Robert McNamara, Paul Wolfowitz and Christine La Farge assuming positions as Chairpersons of World Bank and IMF.

In fact, she accepted accolades from the same network of people.

Central Bank governorship had seldom been selected from within BNM. It could have come from any background - auditors, bankers, civil servants, diolomats and even colonialist.

Why Zeti "memandai" to dictate the PM a successor when through the years she never put Ibrahim in the forefront but dominated the limelight all for herself?

Presuming Awang would resign from his political post or maybe not necessary so depending on the definition of civil servant, his background as former Deputy Governor of BNM also follows a past precedent.

In case any "Melayu mudah lupa", the great late governor Tun Ismail Ali used to serve at the Malaysian Embassy in Washington DC, US as a civil servant and diplomat.

It is quite OK then for Awang to follow the footstep of the great man. More so for Awang who served as Ambassador.

It would mean the son-in-law to the successor of Tun Ismail may not be the choice. Too childish and too much his own self for such an important government post. 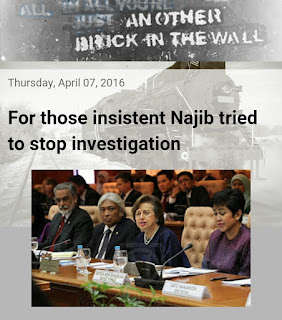 One concern with Awang as expressed by an officer in BNM is that he may be a wee bit "relax" and not as firm and swift in his decision on operational matters.

BNM need to buck-up in the area of monitoring and enforcement which is in the allay of Dato Nor Shamsiah. [Read previous posting here]

They can't put together evidence case agsinst 1MDB but still adamant to penalise them.

Her new concept out of thin air and dreaming we are already Wall Street or City made BNM slackened and CIMB a mess. 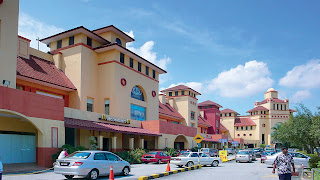 Guess she will not be Governor and be reassigned elsewhere within the Civil Service just like Solicitor General Dato Azailiza [read here].

How's the date with a former boss at IOI Mall last week?

Another concern to come with Awang's appointment will be the petty issue of more Kelantanis in the civil service.

Tun M made sure Ku Li never ascend to PMship because he believe Ku Li will be clannish and bring up more Kelantanis to the forefront in government.

Anyway Awang may still have the kampong in him but he has left Kelantan since age 12 to study at STAR Ipoh.

At least, Awang is friend-ly party and not green but blue. Furthermore, better Kelantanis than another Geng Loceng or another K as in Keling in high places.

There is too many already up there. They are too noisy and crafty but usually empty [Fine examples by blogger Gopal Raj Kumar here].

Better a Kadazan or Kayan or Kenyah.

One elderly K even invited foreign intervention to topple the government in the betrayal tradition of another K, Raja Mandeliar.

No need for Zeti to dictate to PM who is going to replace her.

So Agong has absolute discretion to appoint the new Governor. No need for Agong to follow the advice of the PM or FM on the appointment of the Governor. Hopefully Agong is aware of his authority on this matter.

Excellent comment but someone will advice the Agong differently I am sure.