Adib, Razali, Johor MB: Things are not always what they seem? 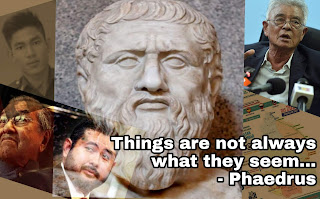 Things are not always what they seem; the first appearance deceives many; the intelligence of a few perceives what has been carefully hidden.

At the Teoh Beng Huat Inquest, the weird looking Dr Porntip from Thailand had a differing view from the other three local and professional experts.

Together with the coordinating DPP's affidavit at the end of the Inquest, the common view was there was no murder. But the coroner took the perceived to be politically safe conclusion as not conclusive.

In the case of the Inquest on death of fireman Adib Muhammad, the DPP filed an affidavit to conclude he was not beaten.

But there is an expert from UKM and witnesses claiming otherwise, and Inquest is still on-going. Comfortably, the Seaview's Mariamman Temple Committee withdrew several of their applications.

Does that not conform to the quotation of a member of philosopher Socrates's inner circle above?

Malaysiakini gave the impression he is fed-up with advocacy. SUARAM steered the narrative to recent event. What really happenned?

The public spat between TMJ and Tun Dr Mahathir on the Rome Statute issue eventually led to Johor having a new MB. Suddenly, all became quiet.

Dato Osman Sapian is a useless MB, but what is coming out in the media may not be what it seemed. 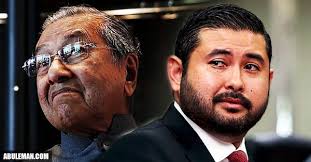 A group of students made an open invitation to the Crown Prince of Johor to a forum on Rome Statute.

His highness will not accept such an invitation made in a provocative way. More likely a "trap" than a public discourse, surely a political stunt.

It was TMJ's pressure on the Rome Statute that seemed to have led to another trademark PM#7's government U turn.

Tun Dr Mahathir started the public spat by indirectly accusing the Johore royalty wanted protection to "beat people up" and in one of his responses to TMJ threatened sedition charge. Anwar Ibrahim revealed a royal is behind coup d'etat against PM.

TMJ had been hard in his argument. His highness argued Rom Statute would affect the rights and special position of Malay rulers. Consent and concurrence of the Rulers Council was required before hand.

His highness cited the plight of the Palestnian as example of the failure of Rome Statute. The response to Mahathir's threat was it his rights as citizen to speak. His highness challenged: "I'm all yours. Finish what you start."

With popularity waning, Mahathir and his cheerleaders, including the comedic Syed Sadiq and Maszlee Malek could only make noise. Clearly to many keen observers, the old man seemed spooked. 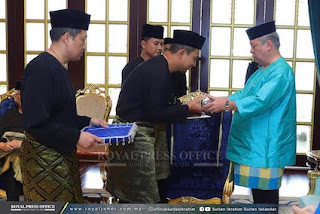 Apparently, there was a conspiracy theory making its round that the resignation of the Sultan of Kelantan as Agong was to have Sultan of Johor as replacement and wishful thinkers believed it spells the end of Mahathir.

That was why Mahathir seek an audience with the Sultan. There have been many speculation on what transpired in the four eyes meeting that ended with the Sultan sending off Mahathir in the first model of Proton Saga.

The Mahathir-TMJ exchanges also involved decree to remove Osman Sapian. Mahathir will not allow himself to lose face and refuted Sultan has such power.

The reply is the provision in the Johor constitution, which have not been challenged in any Constitutional Court and not over riden by the Federal Constitution. The precedents are too many to dispute.

Suddenly, Osman submitted his resignation to Mahathir and the palace official announced the new MB. Sultan had his last words and all end well happily ever after as in any fairy tale. 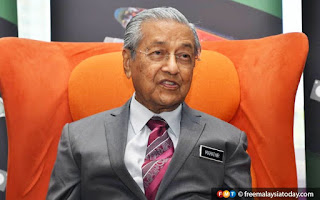 It raised the suspicion Rome Statute was not really the main issue but happen to be useful.

It is necessary for legal redress for MH17 through the International Court of Justice. However, its usefulness is in question because US, China, Russia, Indonesia, Singapore, Thailand, etc. are not signatories.

Mahathir did say in his statement that Rome Statute will not effect Malaysia. It is applicable when countries do not take any measures on issues raised by other signatories.

When it comes to Mahathir, one canot not follow the money to know his real intention. 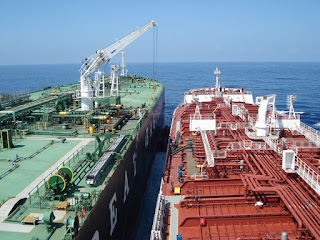 On April 2nd, before the spat, Mahathir witnessed a signing ceremony involving Hutchinson of Hong Kong and KA Petra for ship to ship transfer (STS) hub development in the waters of Johor Port.

That brought reaction from Johor in which TMJ claimed neither the Sultan nor MB knew of this plan.  A state exco member from DAP insisted it require prior Johor's legal consent as it is under state right.

STS activities is one of the unmentioned cause behind the border dispute between Malaysia and Singapore. Pemuda UMNO raised this issue against former MB.

The answer could be found in the questuon: Who is behind KA Petra? Has STS activites been operating in Johor? Who owns Johor Port?

Is there more than midst the media? 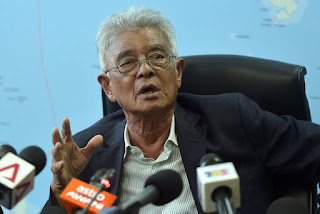 Kua Kia Soong claiimed Razali quit due to his frustration with SUHAKAM finding that Police's Special Branch was behind the abduction of the missing Pastor Raymond Koh and syiah acttivist Amri Che Mat.

Is it really so? Or Razali's frustration maybe be due to something else?

For instance, Razali had expressed his concern on the judiciary. MMO reported him advised "judiciary should be steadfast in maintaining its independence as it is best suited to ensure checks and balances and the protection of human rights and fundamental freedoms".

Naturally, the examples cited relate to human rights. But could he be disappointed with the manner judiciary under Tommy Thomas and Richard Malanjum is heading away from rule of law to rule the law, to quote a BN MP from Pahang?

Razali could be frustrated with the slow progress on the Wang Kelian mass grave  found in 2015. The PH government finally agreed to do an RCI in early January and the study supposed to be completed by September.

It may have been delayed by change in government but that is progress. Maybe the new government is just giving lip service to human rights and not serious. It may have contributed to his frustration.

Another source of Razali's frustration may have to do with the U-turns on ICERD and now Rome Statute. He should blame it on the reckless manner Foreign Minister with support from US-backed human rights activist to bulldoze their agenda.

Without sufficient consultation with all stakeholders, it is bound to fail. Why is US not signatory of Rome Statute?

Perhaps, one need to study the claim by Kua Kia Soong. An extract from MMO dated April 2019 below: 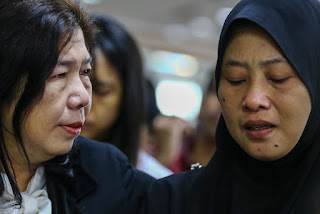 KUALA LUMPUR, April 3 — After an extensive public inquiry, the Human Rights Commission of Malaysia (Suhakam) announced today that the Special Branch, the special police intelligence team from Bukit Aman, was involved in the abduction of pastor Raymond Koh, similar to that of activist Amri Che Mat.

Commissioner Datuk Mah Weng Kwai said its decision was based on the findings of its panel that had been looking into Koh’s abduction, which took place on February 13, 2017.

“The direct and circumstantial evidence in Pastor Raymond Koh’s case proves, on a balance of probabilities, that he was abducted by State agents namely, the Special Branch, Bukit Aman, Kuala Lumpur.

“The Panel further finds that there is no evidence to support the contention, as suggested by Counsel on behalf of Pastor Raymond Koh’s family and Counsel for the Bar Council, Pastor Raymond Koh was abducted by persons or groups of persons acting with the authorisation, support or acquiescence of the State,” Mah said. 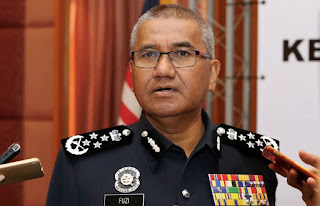 That news got swift reactions from Ram Karpal who seek for the suspension of the retiring IGP, Tan Sri Fuzi Harun.

Fuzi is known to be Mahathir loyalist, but The Star reported Mahathir said, "He was then the Special Branch (head) but is going to retire soon. We will let him retire first and then we will have another IGP conduct the investigation."

He did say also, "This needs evidence. I do not know if they have evidence to prove that this is what happened."

However, Mahathir distastefully politicise it to blame on the previous government. It is not impossible that he would politicise and pit Datok Hamid Bador, the newly appointed DIG and present DG of Special Branch to investigate his previous boss

The PH politicians have been accusing Fuzi for covering up the 1MDB case. It is an expected witchhunt. Most welcoming as it anger the people more and helps BN for GE15. 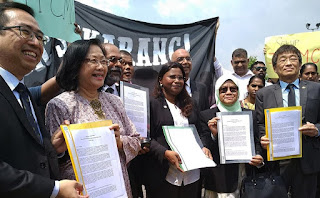 Doubt Hamid Bador would allow himself to be used, especially when the issue was spin towards instituting IPCMC by lawmkers.

Conveniently a group of NGO calling themselves Gabungan Tuntut IPCMC marched to Parliament without police approval to demand and start a concerted effort towards the setting up of IPCMC.

SUHAKAM have been hijacked by these leftist for years. Their effort to paint a bad picture of police is now proof.

They have yet to prove the abductors were operating under Special Branch instruction or their own accord. However, it is already being used to politicise for establishment of IPCMC.

If politics is the basis, the by-election results showed the 2018 manifesto for IPCMC is no more relevant with the loss of PH at Semenyih and Rantau. Dr Ibrahim article in Harakahdaily felt IPCMC is not meant to curb wrongdoing but politics.

The intention is to have civilians untrained and unfamiliar with the work and operational limitation of law enforcement to control police operation. The pro-IPCMC activist is likely motivated by past revenge against police.

However, entertaining them will eventually lead to underworld criminal bosses finding their way in and have legitimacy to control the police. Malaysia will deteriorate into lawlessness.

Establishing IPCMC means the members will be empowered beyond the law and constitution. The incident at Rantau is indicative of what can happen:

In another video, one of the "PKR police" were claiming this is people power.

Razali maybe frustrated with the progress of his effort. As diplomat, he would not have condoned the improper manner SUHAKAM pushed the IPCMC cause in an underhanded and manipulative manner.

More is not what it seem

The current hot discussion is ECRL; it's cost, new routes, and the political blame game.

Thngs will not likely be what it seems. 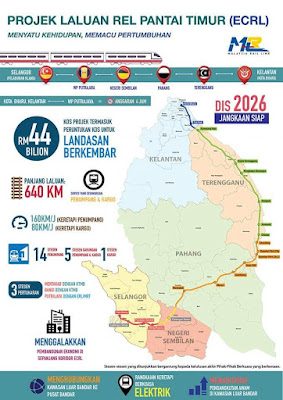 Look at old route (below) and compare with new route (above). 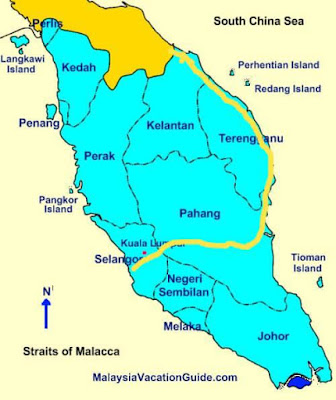 KA Petra owner is a proxy to a man with hilltop green roof home.