Will DAP's preferred David Wong be the next CJ? 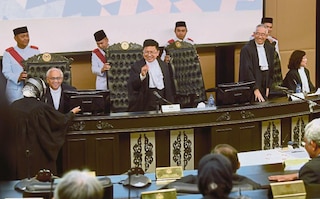 Tan Sri Richard Malanjum last day in office was on April 13th. He retired  after 27 years in the judiciary.

The glowing tributes began to pour in to describe his journey from Tuaran to top office at the Justice of Palace as epic. Bar Council President attributed his short tenure as making an indelible mark.

Naturally, Sabah Law Society would gave him the highest tribute as leaving behind a legacy.

Chief Justice for Sabah and Sarawak, Datuk David Wong Dak Wah gave tribute to Mulanjam's mobile unit initiate to resolve citizenship issues in Sabah. The former DAP candidate for Sandakan is said to be one of the candidate to replace Mulanjum.

There was no farewell ceremony but his last message pen as Frank Sinatra's song, My Way was to ask to protect the judiciary

He seek from his colleagues, “All I ask from you is to protect the judiciary no matter what others may say".

Tun Dr Mahathir response was late and too late as reply MP from Paya Besar's line in Parliment to accuse the government as Rule the Law. He said yesterday government is committed rule of law.

Earlier, Federal Court with David Wong as member rejected appeal from Najib. It seemed judges are operating under instruction from executive through the AG to expedite trial and not allow delay. 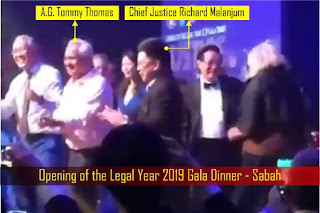 Malanjum's replacement has not been decided yet but Singapore's Strait Times expected it to be a potential flashpoint between the palace and the executive.

Yesterday, Mahathir was reported questioning the delay for decision by palace on Pakatan Harapan's choice. He said there is no need to convene Council of Ruler for a decision. Gurdiar Singh Nijar supported Mahathir's claim.

Both should re-read Article 122B (1) of the Federal Constitution.

On the issue of candidate, is David Wong the DAP's preferred and only choice offered by PH?

David Wong was appointed to the Federal Court in April last year and his days in the Court of Appeal was only from 2013 to 2018. More so, Utusan reported that he will be due for under mandatory retirement.

DAP benefited by promoting Tommy Thomas and Malanjum for AG and CJ.

It is talked about within the legal circle that Tommy made claims privately that "Me, Lim Kit Siang and Guan Eng ... we are all one".

It was also rumoured within the legal community that the questionable "acquital" of Guan Eng on the Jalan Pinhorn home was discussed together between Tommy and Malanjum.

This time around, DAP may need to not only protect Guan Eng, but also few other DAP leaders from the Penang tunnel corruption scandal. The IP strangely surfaced on RPK's Malaysia Today almost in it's entirety.

And, this time around Chow Koon Yeow's reaction to questioning from BFM lead to suspicion there is massive kickbacks in the Penang Transport Master Plan. 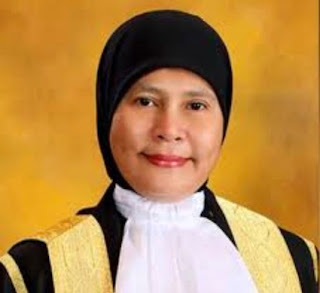 Alleged corruption of DAP may not be high on Agong's consideration for the appointment.

The previous Agong from Kelantan was reluctant to appoint non-Muslims for the position of Attorney General and Chief Justice. It could be the reason current Agong's decision is not immediate and decided to consult the Council.

This time around, the Royal Council has camps and may be divided in coming to a consensus thus raising the possibility that it will stick to a tradition.

It is speculated that government may have decided on it long ago but it was initially believed to be a stalemate between DAP's choice of David Wong versus Mahathir's choice of Dato' Tengku Maimoon bnto Tuan Mat.

Tengku Maimon have been hyped as the first female. She hails from the East Coast and despite being the latest edition to the Federal Court, it is said her name was tested to appeal the Agong,

She was one of the judges that consistently ruled against Dato Seri Anwar Ibrahim in his liwat cases.

An Islamic activist lawyer claimed she was not in the list since she will not likely appeal to the Royal Council for her "liberal" decisions against the Islamic position in the Constitution and Muslim interest in the Bin Abdullah's case and Selangor fatwa against Sister in Islam. 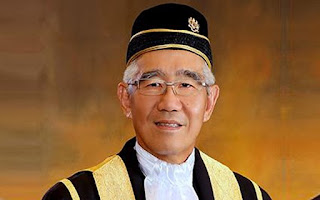 A source claimed she was not in the list. The three in the proposed list were David Wong, Dato' Alizatul Khair binti Osman Khairuddin, and Dato' Rohana binti Yusuf

There are three senior judges due for retirement; David Wong, Tan Sri Zaharah and Tan Sri Ahmad Maarop.  Zaharah and Maarop is due for May and November, respectively.

David Wong is due for retirement for February 2020. It raises a possibility of the extension made controversial by Bar Council of former CJ and President of COA, Tan Sri Raus Sharif and Tan Sri Makaruddin respectively, which led to Tun Daim requesting them to resign.

Another PH flip flop on their stated position in the making.

Apparently, Maarop was offered, but he turned it down citing few months as CJ is meaningless.

All points to David Wong as Dato Lokman Noor Adam hinted. If it is so, it means Mahathir failed to get a Muslim judge as CJ and it will affect him politically.

Among the move Mahathir need to deliver to "strengthen his political position" are new AG. CJ and MOF, including major cabinet change.


If any, a dark horse could be Dato Mohd Zawawi bin Salleh. Mahathir could be seen to secede to Agong with this choice, but it will be in the right direction to appease the Malay and Muslim majority.