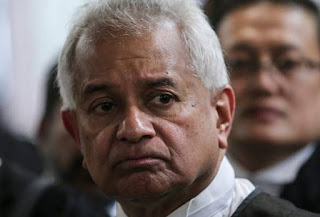 Witch hunting is not working.

PH days are numbered. Public hatred is on the rise and fast. Exposure on BN past wrongdoings will not catch on with the public.

If Tommy Thomas wish to make a political case of Dato Mohamad Hasan, his numbered days will end faster than he expected.

And, the people he is covering up for could not be protected any more soon.

That will only make PH being seen as sore loser. The more Dato Najib highlight the weakness of PH administration, the more he get charged.

The more they do so, the more public will not believe this charges or court decisions.

The long quiet Rafizi raise the RM10 million illegal transfer to London made though a money changer to buy an apartment.

He questioned Tok Mat's wealth too and even had their dedak paid propaganda team to play up the issue.

Being the vocal nature of Indians, the clueless Dr Streram tried to raise the same issue but got exposed of luxurious home, and alleged breach of trust and cheating.

By getting Tommy to charge Mat Hasan, PKR will not be able to get even but plunge the judiciary further into crisis of confidence.

Tommy has yet to charge the many obvious offenses done by PH Ministers, leaders, politicians, and family members, but when involved UMNO politicians, it is done immediately before one could spell his name.

If the one term PH government goes, what made Tommy think the next government will not repeat what Master Robber-led current government do or the least, make his late life less than comfortable?

If Tommy thinks this continual series of  witch hunting could relief public pressure of the PH government, and himself for acquiting Lim Guan Eng and only made Datok Gnarajah as scapegoat for the terowong case, it is most welcome.

Soon, more MBs, Ministers and MPs will resign or being called by the Lord. It will only help PH government to lose focus on governing and more Cameron Highland-Semenyih-Rantau to come.

Comes the time, BN and PAS take over government.

The table could turned and the overly draconian members of  law enforcement, current government, their corporate stooge, Zeti's husband, and the likes of Tabung Haji's Datok Zukri and Dato Zaiton will get their turn at the other side of the interrogating table.

Without even such threat, Tommy cannot legally presume that just cause the money changer was charged, the customer is wrong.

Logically speaking, do not pre-decide to charge before investigation was done, and in the case of Papagomo, police said no case.

In case he is not aware or being indifferent, the Rantau large margin is a signal that the public do not care anymore for PH's witch hunting and exposure.

The series of exposure made of BN previous government including on Felda and Tabung Haji had no impact.

The by-line is "Apa saja mereka kata dan tuduh, kami tetap undi BN". The political conspiracy is too obvious and widely exposed that the allegations could never be believable.

The by-election results repeatedly is an expression of their anger on what the fuck is happening to the economy i.e. their economic well being?

Why the fuck is PH refusing to honour their election manifesto?

And, they are saying fuck-off with orchestrated excuse to blame by accusing Najib mencuri, high debt or Jho Loh.

Character assasination campaign is considered illegal and can be fined in Indonesia. It is considered outside the political scope in running for public office and within the realm of law enforcement, not politics.

Election is about the political contract between voters and candidates.

Exposing alleged wrongdoings in, which is not investigated by law enforcement and charged and sentenced by a court, is improper for election campaign.

More so, this issue of alleged wrongdoing was raised in Parliament back in 2013 and answered by then Minister in the PM Department, Datok Nancy Shukri.

Mat Hasan was cleared then. And, violating banking law will only be required to pay fines. He is a successful corporate man thus could afford it.

Charging Mat Hasan would be a waste of time, because it is not a criminal offense that could decimate his political career.

Neither will it douse the population anger against the current government. Nor the anger of the young voters, civil servants, Muslims for the insult on Islam, Malays for the insult on the Malay royals, job seekers, retrench workers, and even smokers.

The public do not care anymore for PH government exposure of past BN wrongdoings, even how much they intend to shove the news through mainstream media and friendly portals.

They will ignore and not bother to buy newspaper or switch away from the channels, which is linked to spinmaster camouflaging as a news editor, Datok Abdul Kadir Jasin.

Mahathir can continue to talk till the last shovel of soil to bury his dead body. But the public only want to see results yesterday and no more future plans.

The more Tommy take such drastic actions, the more they know it is political and racially motivated against the Malay.

As it is, Tommy may not last any longer with further pressure mounting from public for bulldozing the ratification of ICERD and Rome Statute.

He is championing his personal agenda than carrying out his role as AG in accordance to the law, procedures and conventions.

His action made PH being seen by the majority of the population as not having the Malay spirit.

If Mahathir does not fire him, have him replaced, and not extend Tan Sri Richard Malunjum tenure as CJ, he will lose all support from the Malays and support within PPBM deteriorate further.

No economic miracle from Daim could help.

Increasingly public is more knowledgeable of happening and expect current cabinet Ministers to be charged for corruption, CBT and abuse of power. Daim and Mahathir & family will eventually not be spared.

The ECRL new package is not convincing that there were savings. Is there personal interest involved?

As it is, the law enforcement is seen as obviously been directed to follow political script.

Tony Pua was silence, but Rafizi still made attempt to defend the issue. Suddenly, police issued a statement to say they have the money trail that leads to 1MDB money.

This is an authority speaking and they may or may not have documents and evidences, thus no one could dispute. However, it is strange for police to reveal their preliminary investigation.

I heard lynch mobs are being formed to hunt down all the stupid Pakatan leaders and their stooges.

It appeared that even Tommy Thomas' tenure at AGC is coming to an end. Somebody pointed out that Tommy was born in 1952 which meant he is near retirenent at 66 years old. The constitution provides that appointment of AG is similar tk judges.