Is there a mystery hand orchestrating the SRC deposit, BMM raid, and leak to WSJ? 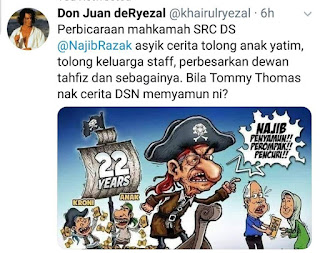 In a previous posting HERE, doubt was raised on a BNM officer ability to quote exact clause of the law contravened in his police report about half an hour after the raid on Ambank office.

The subsequent witnesses seemed be giving glowing words of Dato Najib's generosity that a commentator twitter asked where is the part Najib is the "pencuri, penyamun dan perompak" (thief, bandit and robber)?

Husin Lempoyang hinted Mahathir's "mencuri, menyamun dan merompak" or his plundered wealth can be seen in his children.

Today's witness, Umi Devi spent a whole day reading from text. Who prepared for the bank officer? Why was she allowed to read prepared text instead of being cross examined by the DPP? Does she has hearing problem thus could not do a Q&A?

Yesterday, prosecutor raised a pertinent issue, in which RM42 million of RM104 million of SRC money went to Najib's account, but what happen to the rest? 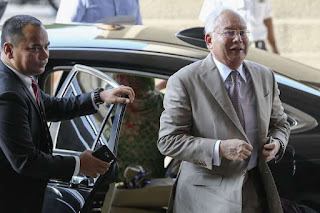 KUALA LUMPUR, April 24 — Datuk Seri Najib Razak’s lawyer today produced in court a chart of the money trail of a total RM103 million from former 1MDB unit SRC International Sdn Bhd, including a total of RM42 million to Najib himself.

Harvinderjit said the funds then flowed from Ihsan Perdana to Najib as well as other unspecified recipients.

Harvinderjit said that only RM42 million of the RM103 million went to Najib.

Harvinderjit outlined the money trail when seeking for documents from an Affin Bank officer to identify who received the rest of the money from the RM103 million sum.

Today, when seeking for the additional 11 bank documents, Harvinderjit argued that all RM103 million originated from the same source — SRC International — and that it was essential for the defence to learn where the rest of the money went.

“If the prosecution’s case is that out of SRC, a total of RM42 million ended up into accounts belonging to Datuk Seri Najib, it is also relevant to note over RM60 million did not end up in Datuk Seri Najib’s accounts and ended up somewhere else.

“This is why I say this is desirable and necessary for us to determine where the money went to,” he said.

“It is part of our defence that the same people in SRC were conducting some business, questionable and dubious business, where money from SRC has been channelled to a number of entities and issued to unknown recipients, part of the money may have ended up with Datuk Seri Najib,” he added.

Ad hoc prosecutor Datuk V. Sithambaram objected, however, to Harvinderjit’s request for the additional documents by arguing that these were outside the scope of Najib’s trial involving seven charges relating to SRC International’s RM42 million.

“This case is based on seven charges, specific seven charges. This court is not going to conduct an inquiry of how other money irrelevant to these charges were spent or used on Our case is solely related to RM42 million as stated in the charges,” Sithambaram said.

“If we go on this thread, if this is allowed, for every banker, we have to go on a wild goose chase which has no relevance to the charges,” he said, noting that Najib’s lawyers were free to produce documents at the defence stage later on.

The trial is currently at the prosecution stage, in which prosecutors must prove that there is a case for Najib to answer and enter his defence.

Harvinderjit responded to say the way the money from SRC International allegedly reached Najib was “part of the same system” where the rest of the RM103 million was paid out, insisting that those documents on the recipients of the over RM60 million figure were consequently relevant here.

“It’s my client’s defence that he was manipulated by certain people and these people gained tremendously,” he claimed.

High Court judge Mohd Nazlan Mohd Ghazali finally ruled that Najib’s lawyers would only be allowed to get one additional banking document considered relevant to Najib’s charges in this case.

The document that Najib was allowed to get from Affin Bank’s Rosaiah is regarding an RM8 million cheque with the number 0019327 as issued from an Ihsan Perdana Sdn Bhd’s Affin Bank account on December 30, 2014.

Earlier, when outlining seven transactions in his own chart on the purported money trail of funds originating from SRC International, Harvinderjit had said that RM40 million went into Gandingan Mentari’s account and was transferred to Ihsan Perdana on December 24,

The trial resumes this afternoon.

It is only fair for Najib's lawyer to request the 20th witness to furnish document regarding the transactions of the other SRC money recipient accounts.

The lawyer believed certain people inside SRC and Gandingan Mentari have been conducting questionable transactions.

How could the amount that ended in Najib's account is known but other recipients are not made known.

Apparently these mysterious hands are not just transfering RM42 million but RM104 million from SRC to unknown recipients.

But the prosecution is hiding from the court the identity of the other recipients.

Prior to this, Najib has repeatedly said he expect donation from Saudi, but it looks now that it was SRC that was deposited into his personal accounts.

The bigger mystery possibly is the moment SRC money came in allegedly by mysterious hands, BNM came in to raid.

At the same time, the raid was mysteriously leaked to The Wall Street Journal which reported of the raid the next day on their portal.

MACC and Police have yet to start investigation then. 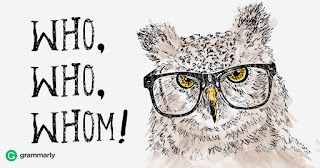 It is as if mysterious hidden hands deposited SRC money into Najib's account and immediately leaked to WSJ.

Tan Sri Shafee Abdullah said the email between the mystery person and Ambank officer Joanna shows an instruction not to show to PM. 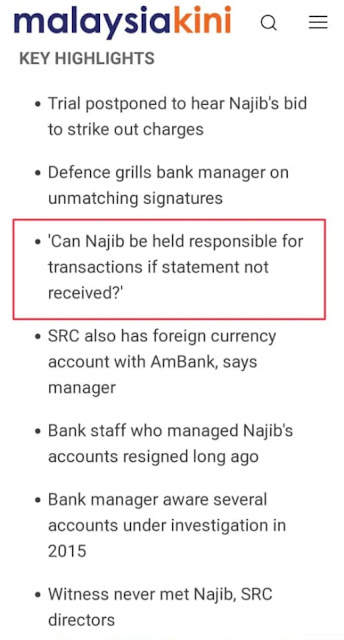 PM was not given a copy of his account statement. A mistake which usually end with Banks losing their lawsuits against errand borrowers.

Will it be revealed in court of the mysterious hands that deposited the money into Najib's account? Who was the mysterious hand at BNM able to influence BNM investigation on Ambank? Who at BNM empowered and accessed to leak info to WSJ?

Today's witness Umi Devi will be interesting to hear her turn to be cross examined by defense lawyer. [Update 4/26 12:00 PM: She confirm an inconsistency between her testimony with that of a BNM officer.]

Nik Faisal was mentioned as an authorised Manager of Najib's account. Another widely known is the late Dato Adlin, Najib's Principal Private Secretary.

Is Nik Faisal the mysterious hand? Will he appear in court as witness or speculated to be crown witness?