Capitalism has outlived its existence 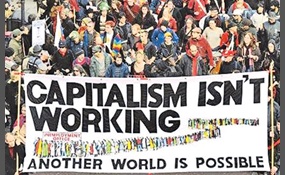 Our personal gut feel, on the present day economic model based on endless growth is that it is unrealistic and will breakdown.

The capitalistic model is complimented by a money system of  conventional banking and financial structure based on an  underlying time value of money and preservation of asset of the wealthy through "risk-free" return bearing instrument. It is similarly based on endless growth too.

A matter of time, it will outrun its course as a result of growth in the financial side of economy is not in-sync with the growth in real economy of generated real goods and real services.

Growth in the financial economy will outdo and not in preportion with growth in real economic to eventually result in over-inflated value of financial asset.

It is unsustainable and given time, the pre-determined growth of capitalist economic model will fall apart as it is not based on a model dedicated to serve humanity.

It has not been an economic model dedicated to generate good and services for mankind and to benefit all the stakeholders of an economy, but taken from the animal world of survival of the fittest. An economic model that astray from its social role has too many leakages.

That is our hypothesis, which need more theoretical refinement and empirical research. Nevertheless, an article from Euronews portal forwarded to yours truly is interesting:


Capitalism is failing us all. Could Islamic economics be the answer? 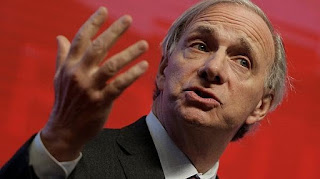 Billionaire Ray Dalio, manager of the world's largest hedge fund Bridgewater, recently shocked the world when he announced that "capitalism is failing" and that a "revolution" is coming.

There is no denying that global inequality is at unsustainable levels, and that interest-based economies are no longer fit for purpose (in many countries interest rates are too low to incentivise saving at all).

I believe that Islamic economics, with its 2.5% zakat wealth tax (and much lower taxes in other areas) might give us a clue on how to eliminate the worst social inequality.

And with a prohibition of abusive high-interest businesses and the incentivisation away from interest-based savings accounts, it can reinvigorate the global economy.

These are not just Islamic economic concepts; these are universalist traditional Abrahamic ethics, and a common sense way for us all to enjoy a truly free market.

They are significant because of who Dalio is, that is to say probably the most successful hedge fund manager in the world. One of my colleagues commented last week that this was the equivalent of the Pope declaring that Catholicism is failing.

Dalio’s words are perhaps more shocking because they violate one of the most sacred unwritten rules of the global rich: you’re not allowed to criticise capitalism if you have benefited hugely from it.

Protest - or even displeasure - with the system is a luxury only the poor can afford. It’s normal to see cleaners, or even Uber drivers, angry at inequality.

It is less normal to see the world’s wealthiest publicly stating that the order to which they owe their success is “not providing the American Dream.”

The “no protest for the rich” rule has led billionaires to channel their sense of responsibility, frustration or even guilt into philanthropy.

This means that we seldom have the wealthy discuss these issues, let alone the root causes from which these problems arise.

Those root causes go deeper than many of us realise and addressing them will mean re-examining not only our economics, but our politics and values.

Most of us want a societal order where there isn’t a huge vacuum between the classes.

To create societies where there is mutual respect and compassion, we need an environment of reconciliation between the elites and the masses. 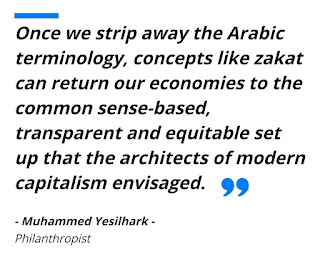 The only way to achieve this is through a wealth tax such as the payment of zakat - one of the pillars of Islam - and an effective tool in addressing our current issues.

But first, to reform a failing capitalism, we need to fix two things: taxation and the interest rate system.

Taxation is easier (and far less left field) to critique since there is an emerging consensus that the global tax system simply no longer works. Through a combination of tax avoidance schemes, tax havens and even relatively innocent methods like transfer pricing, high net worth individuals and their corporations have very little (if any) tax to pay on their wealth.

In the absence of effective wealth taxes, governments have no choice but to enforce taxes that perhaps unfairly target the poor, like sales tax and inheritance tax. The injustice of some of these taxes further normalises tax avoidance and polarises society even more.

Critiquing the interest rate system is more controversial. Most people feel that possessing money has some inherent value that should be recognised in a zero (or almost zero) risk way.

But with negative interest rates spreading around in the developed world, interest rates are so low in many countries that they simply do not fulfil their purpose of incentivising consumers to save any longer.

In short, as Deutsche Bank’s Jim Reid titled his research report last year, we might be witnessing “The Start of the End of Fiat Money.”

Therefore, our current fiat-based monetary system might require a rethink. After all, in the grand scheme of global economic history, it can still be considered an experiment as the vast majority of human history was based on gold and silver-backed sound money.

Current proponents of digital currencies (such as so-called Bitcoin maximalists) are proposing a new form of supra-national sound money based on maths - quasi-“digital gold” for the globalised world.

Islamic economics, on the other hand, can give us clues to solve both these issues. Zakat, or Islamic alms, is a simple, transparent annual wealth tax of 2.5%.

Let’s only consider tax havens, where estimated wealth of $10 trillion is held around the world. That means if zakat was paid on these funds (perhaps as some kind of amnesty agreement), there would be $250 billion per year flowing into the world’s poorest areas and worthiest causes.

At the same time, other taxes could be reduced or eliminated. In return for the wealth tax, Islamic economics suggests almost zero tax in every other area, including inheritance.

Solving the interest problem will be more gradual and will require a rethink of the monetary system we currently live in, as I previously mentioned.

I can’t see a sudden global ban on interest but governments (particularly those with low interest rates) could incentivise other forms of investment, increasing regulation around abusive high interest products and businesses to start with.


Some of these might seem very drastic but once we strip away the Arabic terminology, concepts like zakat can return our economies to the common sense-based, transparent and equitable set up that the architects of modern capitalism envisaged.

When the richest guy in the room is telling you the game is rigged, it’s time to change the rules.

Muhammed Yesilhark is a philanthropist, a trustee of the UK National Zakat Foundation and founder of the Q2Q Foundation

Yes, it is about Islamic economics.

Not contemporary Islamic banking and finance that evolved not out of an ethical and moral based philosophy or concept, but meeting commercial pragmatism of capitalistic economy.

An effort towards development of Islamic economy that is at best, melepas batuk ditangga.

Islamic capital market is not puritannically free from usury because it is emulating conventional capital market with niat to deceive the public into thinking it is Islamic.

In our opinion, it is only Islamic if it serve to participate in the real economy in creating goods and services.

At the same time, it responsibly benefit an ecosystem of business owner, managers, workers, distributors/retailers, suppliers, family members, and community in a fair distribution.