Before false hibah announcement, TH branches briefed on run on the Bank? 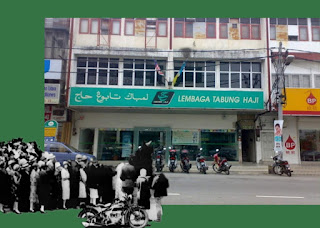 Malaysiakini reported Mahathir guaranteed it will be announced soon.

Is it financially and technically possible? What sort of magic trick could enable new management of TH to do so? Any truth PWC, KSP and Auditor General refused to endorse new account?

The cabinet deliberation is a strange happening since decisions on TH matter is made at their Board of Directors and Minister-in-charge level.

According to Mujahid and to quote The Edge report:


"Lembaga Tabung Haji will release its dividend to its depositors after the pilgrims fund resolves its compliance issue with the MFRS 9 accounting standard, said Minister in the Prime Minister’s Department Datuk Seri Mujahid Yusof Rawa."

MFRS 9 is now a buzzword and the keyword is "resolve its compliance issue". It means the restructuring has compliance problem.

And, TH new management is in a state of panic to be giving several taklimats (briefings) to Members of Parliaments, media, and another one today at Kompleks Islam, Putrajaya for 3:00 PM. 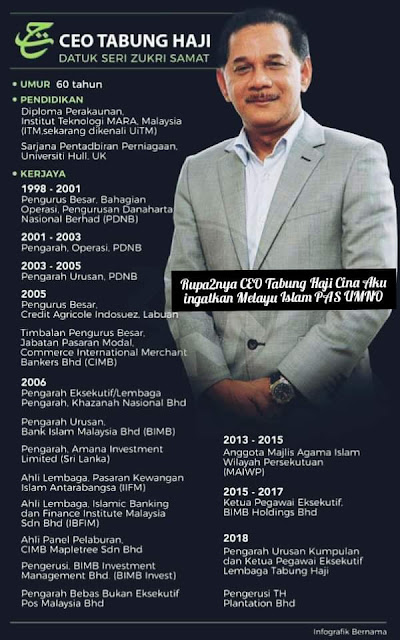 PH cybertrooper hawk Zukri as the answer to revelation that the SPV and indirectly TH management is led by Prokhas's Chinese CEO.

To reply them, what's so great about the Islamic Banker of the Year Zukri that is leading TH new management today?

As mentioned repeatedly in this blog, a background from Danaharta and the successor-in-title Prokhas is no being deal because they are merely go-between Banks and receiver/liquidator.

Prokhas is only consultant; they con and insult. 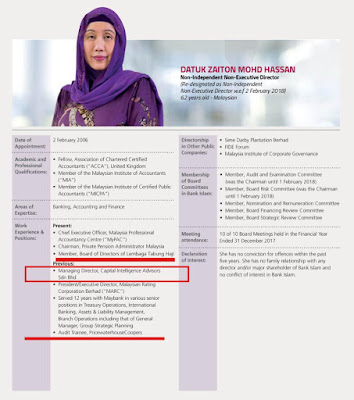 While, Zaiton's profile on the Sime Darby website merely highlighted her as 12-year "utility player  with no specialty at Maybank.

Aided by former boss Tan Sri Ahmad Don, she became President of MARC and raised her profile in accountany from audit Trainee at PWC to MyPAC President.

Zaiton was no "market player" despite having worked at BAPEMA of "rooster returning to the nest", Bank Pembangunan. At least, officemate Dato Shamsuddin Abu Hasan of Aokam Perdana fame became renown in the bull run of the 90s.

As MD of Capital Intelligence Advisors Sdn Bhd, she fumbled big time and TH loss 90% of their investment on the sukuk of Offshore Capital Sdn Bhd, advised by her company.

And, will she be advising on the sukuk bonds for TH to invest according to their new portfolio management policy to focus on Sukuk?

Their back are now against the wall.

TH's PR consultant, Yati may have suspiciously resorted to political slander to call Dr Jamil Khir, Dr Asyraf Wajidi and Azeez Raheem as "3 penyangak." A ploy to associate the two former with the latter Azeez.

Not sure, but is the Tamrin Tun Ghaffar, the former Chairman that sold his family-owned Kelab Rahman Putra membership at high cost to MARA Holding, employed as cybertrooper?

He should be more factual and truthful in his allegations, because Mahathir's crony helped by his late brother-in-law skimmed off TH too!

Mahathir has noticeably resorted to lies and slanders to accuse previous management and BN administration for stealing money that affected ability to pay out dividends.

The same political slogan of "pencuri, perompak dan penyamun" reverberating in the midst of public conversation on "jual negara, terowong" and attempt to flip Malaysia Building in Hong Kong.

They are expected to play rough as seen by yesterday's frontage headline on Najib's so-called first day of trail in the Malay vernacular paper and the SUHAKAM's legally questionable statement.

Apparently, it is heard that the CCID of PDRM uncovered that TH new management have been selective in providing documents for their investigation and blatantly abusing police report to blackmail previous management?

Are all these done out of the advise of Zaiton, Zukri and Yati (ZZY)? Jahat ... orang-orang Mu-jahat.

The crux to the matter is TH cannot pay and cannot afford to pay hibah and subsidise this year's Haj season because new management lost additional RM5-6 billion for 2018 and according to MFRS 9, their asset is below liability too!

Public may not be aware but the discussion on deficit in asset is on 2017 accounts, and not known is the accumulated deficit from 2017 and 2018 could be RM9.9 billion.

Simple, Mu-jahil admitted in Parliament that the asset already transferred to SPV is worth RM10 billion. However, the sukuk bonds (apparently, no more RCPS but two sukuk bonds) issued or to be issued is RM19.9 billion. Fictitous number that double the real value!

The bonds are believed to not have been issued yet and the practise to exchange assets with sukuk bonds issued did not happen.

The bond is likely not approved yet by SC. It is also "NOT tradeable, NOT rated, and NOT guaranteed by government". SPV could default like Zaiton's sukuk bond!

Unless the new Auditor General could be co-erced into giving exception from MFRS 9, TH would have required impairment and Zaiton and Zukri's restructuring plan failed disastrously.

Lets not even talk about FRISC, which Zaiton and Dato Zaki of PWC were the champion of the accounting standard and insisted TH follow it.

It is all in a mess and their failure exposed! 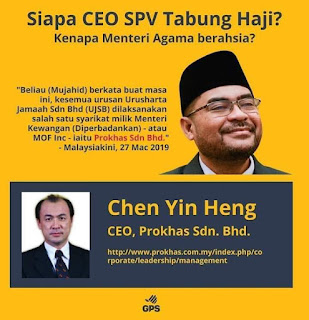 A source claimed the restructuring plan was done by Prokhas CEO, Chan Yin Heng at the request of Tony Pua, the wunderdumb adviser of Lim Guan Eng. It explained appointment of Singapore-born Zaiton as Chairman of Bank Pembangunan by Guan Eng.

It is improper to involve Chan, but it is unfair to pick on his non-Muslim status. He would have been reluctant to get involve, but he is CEO of the government outfit.

The revelation of Chan's role only shows Mujahid is Mu-jahat, Mu-jahil and Mu-nafiq. He and Guan Eng fricking lied in Parliament. SPV is not under PM Department! 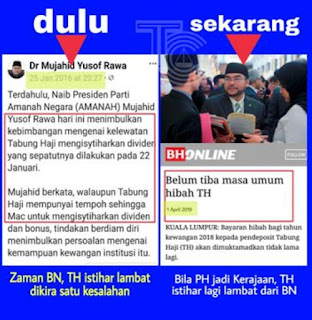 As opposition, Mu-jahat, Mu-jahil and Mu-nafiq questioned TH for late annoucement in early January  but now its April, and if hibah is illegally announced, it will be in for mid-April.

Can TH announced hibah with available money said to be sufficient for only hibah less than 0.75% and not even for the expectation of 1.5%? And, there is the likelihood there is not enough money for TH to subsidise next year's Haj for first timer!

Only way is for government to pump money and reverse this restructuring nonsense, which is not solving the problems in the long term

It is merely a political exercise of destructive kitchen sinking, blame previous management and BN administration, and "blow and job" to curry favour from new PH government. 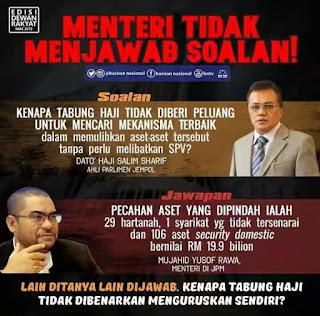 Mu-nafiq have been lying and deceiving the public about PM Depatment in charge of TH (TH Board member defended BNM monitoring TH), hibah, subsidy and denial of asset sold being liquidated.

Prokhas to "warehousing and restructuring"? My foot!

Danaharta could only recoup 30 sen out of every ringgit of bad loan. Market talk is Chan approached Khazanah, but they could not as they have their own impairment problem! 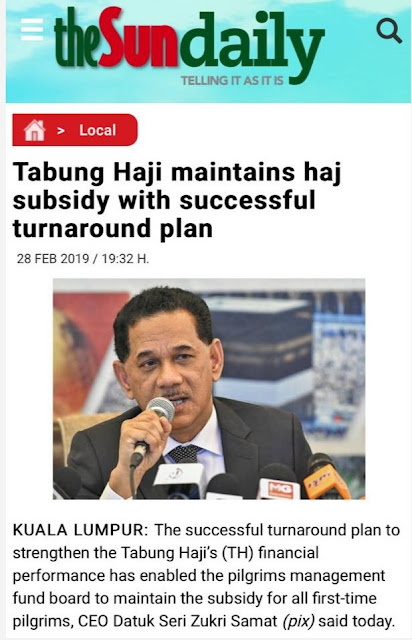 Mu-nafiq claimed TH turnaround plan is successful and able to give hibah and support subsidy. Zukri said the same.

The latest briefing TH provided to media showed they lied and the restructuring was to hoodwink the public.

TH asset for 2018 fell from 2017 level and it is under ZZY's watch. ZZ suspended the investment operations and naturally TH could not perform well for 2018 to overcome market downward slide and impairment impact for 2019.

Allah as witness, Tun Daim verbally requested in a meeting in May/June 2018 with institutiinal fund manager to support the market.

It is at a time, in case ZZ is unaware, everyone in Malaysia, except Guan Eng's marvellous manipulation of EPF account, are faced with the problem of diminution in their investment value since PH came to power!

Contrary to the fault finding attitude of the vindictive new management, devious BNM and blame game new government, a facebooker Khairul Azri found nothing wrong with the 2017 accounts.


TH has other options and it is believed the previous management had plans.

The new management refused to do it but were on a revenge mode. Tan Sri Zeti too was on revenge mode as she was told off that she know nothing about Islamic Banking!

There is the suspicion that Zeti had the insidious intention to clampdown TH's operation as a saving mechanism and more interested to divert the money into Islamic banks' accounts.

Majority are owned by conventional banks including non-Muslim owned, and foreign owned!

It is possible that the current happening is planned for bank run. At 1.25%, deposit with any Banks will earn more.

The script is leading to one and bear in mind that Zaiton is described by some TH insider as BNM proxy.

Words are TH branches are being briefed on how to prepare for one. Hope it won't happen because it will reduce TH to a travel agent.

The allegations they made can be answered and truth can be revealed, but there will be some rough power play involved. Major exercise to shut up those in the know and with access to information. 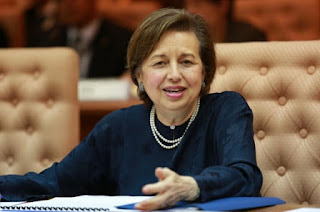 Zeti smiling in victory, but an afterlife still awaits her. May Allah save her.