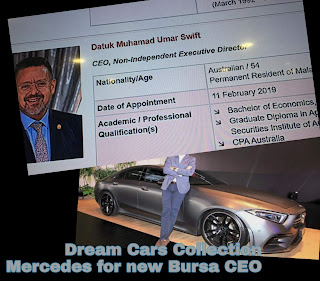 At a time the government asked the people to "ikat perut" (tighten their belt) and it was said by no less than Tun Dr Mahathir himself,

It was said that one reason the previous Bursa CEO, Datok Tajuddin Attan did not get his contract extended was his high salary.

Another reason many CEOs, Chairmen and BOD members of GLCs got sacked immediately by new government sacked were their perceived involvement with the ruling party

Both Mahathir and Chairman of CEP, Tun Daim Zainuddin said GLC CEOs should not be getting multi-million ringgit salary package.

It would mean government and GLCs should be on austerity drive and not spend money on wasteful perk like the latest launched 2018 Dream Collection Mercedes Benz that could fetch between RM530,000 to RM1.4 million. 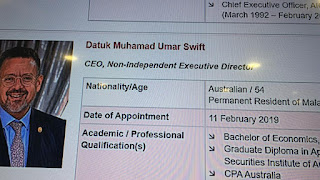 When Tajuddin announced he will retire in February 2019, there were many names speculated but none were picked.

Finally, it was announced to be Datuk Muhammad Umar Swift, a relatively unknown and only known within the Malaysian insurance industry.

Today it is finally known that he is Australian. If he adds value and experiance no Malaysians could, it would be acceptable.

The position for new Bursa CEO and SC Chairman have been bandied about since new government came in.

The change would have been swift, no pun intended. But a friend in the know of going ons in the industry said there were no takers.

"Who wants such a high pressured job that could get one being charged should PH government lose and paid pittance?", said the friend

Even with a package that could include RM650k latest Merc, this Mat Salleh would not have accepted lower salary package than his at MAA.

There was a former NST reporter that was up in arms with Datok Najib for hiring Paul Stradlen. Not that he could do Stradlen's job well, but he thinks he could do it as well and cheaper than the expatrite's pay.

The Mahathir fanatic is seen as part of Mahathir and Daim's groupie. It is a surprise that he has been quiet and allow an expat to take a post local can do.

Swift could commit a crime like Stradlen allegedly did and return to their home country to escape court charges. Quite sure he knows how it feels to be disappointed.

Frankly, it is a matter of time the low salary and no politics "policy" of Mahathir and Daim will be broken.

(To be continued upon reaching Rantau) .

CEP member not frugal too 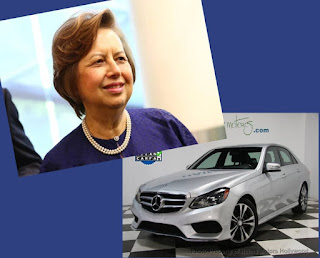 A member of a CEP have not been frugal for years.

Though Mahathir refused to have CEP report revealed to the public, the recommendation to slash GLCs' top menaagement salary package may have come from CEP.

Daim have been talking about it for quite sometime before, during, and after GE14.

However, Tan Sri Dr Zeti Akhtar Aziz does not prractise what was agreed in the CEP. Despite being a government servant during her days as BNM Governor, she was not driving around in Proton Perdana as done by Ministers and KSUs.

She is believed to be going around in a Merc 350. Not sure, whether it is the official car for BNM Governor.

One thing for sure, she was flying first class. When new government took over, she requested for the Chairmanship of PNB. Strangely, for a PNB Chairman, she insisted to be Chairman of a Sime Darby operating subsidiary, Sime Darby Property.

One close observer claimed she has a habit of regularly flying to London. It would would be convenient to fly regularly to London under the pretext of inspecting the progress of Battersea project.

During the stint of Tan Sri Wahid Omar, sources in the airline were surprised that he took business class for his travelling. They were frustrated because the entitled top management end up not taking first class seats. 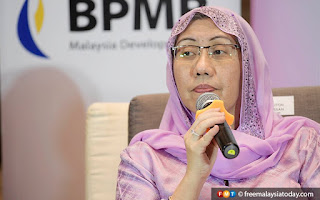 She was appointed by Guan Eng for the position of Chairperson of Bank Pembangunan, her former employer in her days at Bapema. Her package could be as much as RM800,000 a year. Do not know her entitled car yet.

Not bad for a job that will be basically be about kitchen sinking to the hilt, blame previous managements, and over provision of bad loans, to be followed by a profitable next year of writebacks.

On top of that, her role is to be a bully. 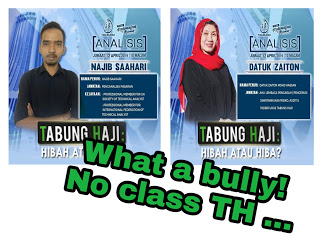 They should have invited Tan Sri Amrin Buang etc, but this is what Datin Yatie planned to get her message across.

Forum is meant to discuss and not bullying to lie to the public.

Do not trust bullies.

Talking about CEOs singing and allegedly campaigning for BN to end up being fired, what about the above SC and BNM member of the Syariah Council writing a book to celebrate PH. 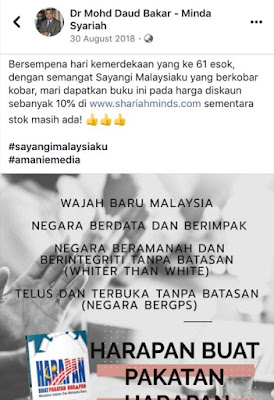 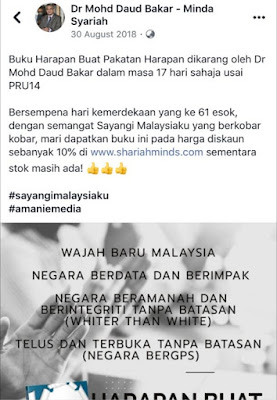 He may be good but the forced-to-resign CEOs better as they are not merely theoretical and academics.

By right, he should be sacked for involving in politics. 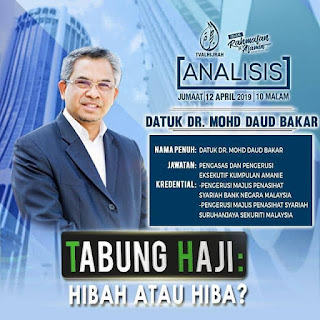 More so, he is a bully too. 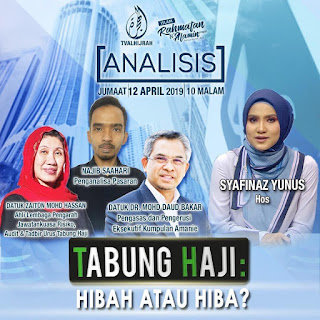 Surely this IKRAM member and PAN activist will lie for Mujahid, Mujahil, Munafiq and Musibat.