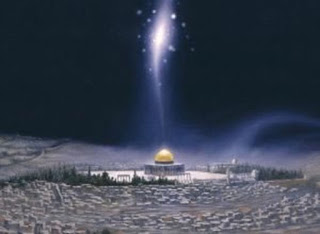 This week's spiritual conversations had been covering two ends of a pole between logic and rational vis-a-vis experience and mysticism.

At one end, it was about the book, Life of Muhammad by Eqyptian Hussein Heykal. It is an evidentiary account in the life and spiritual path of the prophet within scope of historical reality.

On the other end, it started with conversation in one the many family Whassapp groups on the nine brotherhood of Muslim Saints, Wali Songo that spread Islam to Java.

Though we are only clear of the lineage to another Saint, Kendil Wasi, our bloodline apparently extended to Sunan Muria as claimed by a late uncle.

It led to conversation in the esoteric area of sufism in the Sheikh Siti Jenar incident, the Malay Archipelago version of Ibn Arabi's AlHallaj. Then, it delved into sufi poets, Hamzah Fansuri and Jalaluddin Ar Rumi.

We were reminded of the commemuration of Isra Mi'raj on 27th of Rejab tonight (Islamic calendar commence from dawn). It is an incident of challenging poles.

It was Muhammad's celestial journey on a mystical buraq to witness the hereafter.

He prostrate to Allah to receive the important commandment of 5 times a day prayers. That is how important prayers is to the Islamic faith.

Isra Mi'raj could be a test of faith to any Muslims. Beyond the rational logic, values, and rituals of religion, it boils down to belief and faith.

In Islam, it is the belief in the one true Allah, prophet, holy scriptures, angels, hereafter, and fate.

The human logic has its limitation, and needs the guidance of belief.

Without knowledge and enlightenment, there are Muslims that falter to the challenge of understanding and belief of Isra Mi'raj, which was mentioned in the Quran.

There are today deviants claming to be Muslims discarding it as nonsense, illogical, and unscientific. Failing to acknowledge their limited knowledge, the ritual of circumbulation (tawaf) and saei were judge as jahiliah heretic practises. Let's not even delve into literal interpretation of prayers and life after death.

Taking into account selective considerations, one hear shallow conclusion to blame religion as the cause of backwardness and lack of worldly progress among Muslim countries.

On the eve of Isra Mi'raj commemuration, the following extract from an article of Islamic City.com is truly enlightening and a logical effort to explain the mystical event: 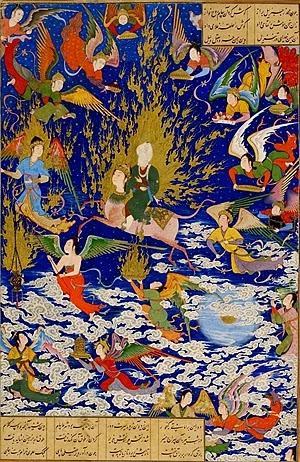 It may be recalled that according to authentic reports when the Prophet narrated the incidents of this extraordinary journey the following day to the people in Makka, the unbelievers found the whole narration utterly amusing. (Muslim, K, al-Iman, 'Bab Dhikr al-Masih ibn Maryam' - Ed.)

In fact, even the faith of some Muslims was shaken because of the highly extraordinary nature of the account. (See Ibn Hisham, Sirah , vol. I, p.398 and al-Qurtubi, comments on verse 1 of the surah -

The details of the event provided by the Hadith supplement the Quranic account. There is no reason, however, to reject all this supplementary information on the grounds that it is opposed to the Quran.

Nevertheless, if someone is not quite convinced and hence does not accept some of the details concerning the Ascension mentioned in the Hadith as true, he should not be considered an unbeliever. On the contrary, if someone were to clearly deny any part of the account categorically mentioned in the Quran, he would be deemed to have gone beyond the fold of Islam.

What was the nature of this journey? Did it take place when the Prophet was asleep or when he was awake? Did he actually undertake a journey in the physical sense or did he have a spiritual vision while remaining in his own place?

These questions, in our view, have been resolved by the text of the Quran itself. The opening statement: "Holy is He Who carried His servant by night from the Holy Mosque to the farther Mosque... " (verse 1) itself indicates that it was an extraordinary event which took place by dint of the infinite power of God.

For quite obviously, to be able to perceive the kind of things mentioned in connection with the event, either in a dream or by means of intuition, is not so wondrous that it should be prefaced by the statement : "Holy is He Who carried His servant by night..." ; a statement which amounts to proclaiming that God was free from every imperfection and flaw.

Such a statement would make absolutely no sense if the purpose of it was merely to affirm that God had the power to enable man to have either visions in the course of a dream, or to receive information intuitively.

In our view, the words of the experience or a dream vision, was an actual journey, and the observation in question was a visual observation. All was contingent upon God's will that truths be revealed to the Prophet in this fashion.

Now, let us consider the matter carefully. The Quran tells us, in clear terms, that the Prophet , went from Makka to Jerusalem and then returned to Makka during the night (obviously, without the use of anything resembling an aircraft), owing to God's power.

Now, if we believe this to be possible, what justification can there be to reject as inherently impossible the additional details of the event mentioned in the traditional sources?

Statements declaring certain acts to be possible and others to be beyond the range of possibility are understandable if these acts are deemed to have been performed by creatures in exercise of the natural powers with which they are endowed.

However, when it is clearly stated that it is God Who did something out of His power, any doubts about the possibility of these acts can be entertained only by those who do not believe God to be all-powerful.

Those who reject the Hadith as such raise several objections against the traditions concerning this incident. It seams that only two of these objections are worth of any consideration.

First, it is claimed that the contents of the traditions relating to the Ascension imply that God is confined to a particular place. For had that not been the case, it is argued there would have been no need to transport the Prophet in order for him to experience the presence of God.

Second, it is questionable whether the Prophet was enabled to observe Heaven and Hell and to see people being chastised for their sins even though they had not yet been judged by God. How is it that people were subjected to punishment even before the coming of that Day when all will be judged?

Both these objections, however, carry little substance, The first objection is to be rejected on the grounds that although the Creator is infinite and transcends both time and place, yet in dealing with His creatures He has to have recourse to the means which are finite and are circumscribed by time-space limitations. This is because of the inherent limitations of man. Hence when God speaks to His creatures, He employs, of necessity, the same means of communication which can be comprehensible to the latter even though His Own speech transcends the means employed in the speech.

In like fashion, when God wants to show someone the signs of His vast kingdom, He takes him to certain places and enables him to observe whatever he is required to observe. For it is beyond the power of man to view the universe in the manner God can.

While God does not stand in need of visiting a certain place in order to observe something that exists there, man does need to do so. The same holds true of having a direct encounter with the Creator. Although God is not confined to a particular place, man needs to experience His presence at a defined place where the effulgence of His Being might be focused. For it is beyond man's power to encounter God in His limitlessness.

Let us now consider the second objection. That too is fallacious for the simple reason that the objects shown to the Prophet represented, in symbolic form, certain truths.

For instance , a mischievous statement has allegorically been represented by a fat ox that could not return via the small hole through which it had come. (See Ibn Kathir, Tafsir, comments on Bani Isra'il 17:1 - Ed.) Or the other allegory relating to those who indulge in fornication - that they prefer to eat rotten meat when fresh, clean meat is available to them. (Loc.cit ; see also Ibn Hisham, vol. 1 p. 406 - Ed.) The same holds true for the punishments to which sinners will be subjected in the Next Life - they are anticipatory representations of the sufferings to which they will be subjected in the Life to Come.

The main point which needs to be appreciated regarding the Ascension is that it belongs to a genre of experience through which each Prophet is enabled to observe- consonant with his standing and mission - aspects of God's dominion of the heavens and the earth.

Once the material barriers to the normal vision of human beings are removed, it becomes possible to view physically, the realities which the Prophets are required to summon others to believe in as part of faith in the Unseen.

In contrast, what the Prophets say is based on their direct knowledge and observation. They can testify before others with full conviction that whatever they expound are realities which they themselves have directly perceived.Ed.)

In conclusion, it is down to faith; belief in the prophet, quranic words of God, existence of angels and after life. Ultimately, it is the belief in the one true God.

We end this Salam Isra Mi'raj with this Rumi poem: 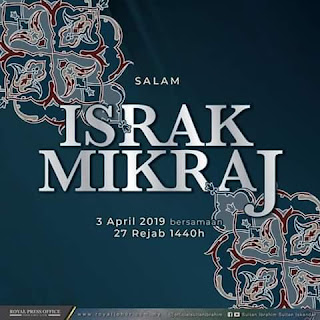 “I searched for God among the Christians and on the Cross and therein I found Him not.
I went into the ancient temples of idolatry; no trace of Him was there.
I entered the mountain cave of Hira and then went as far as Qandhar but God I found not.
With set purpose I fared to the summit of Mount Caucasus and found there only 'anqa's habitation.
Then I directed my search to the Kaaba, the resort of old and young; God was not there even.
Turning to philosophy I inquired about him from ibn Sina but found Him not within his range.
I fared then to the scene of the Prophet's experience of a great divine manifestation only a "two bow-lengths' distance from him" but God was not there even in that exalted court.
Finally, I looked into my own heart and there I saw Him; He was nowhere else.”