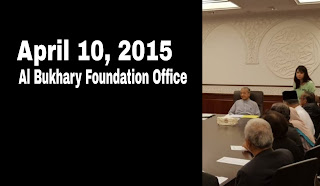 Today is the 4th anniversary of our last engagement with Tun Dr Mahathir.

After four years, Mahathir came out of defeat in UMNO to come out victorious. Those that stuck with him are in positions in the corridor of power.

Among the many in that last meet, few returned back to where they are comfortable with in Putrajaya. There were one or two opportunist fishing from both ponds anonymously till today. And, one had passed away.

But, what Mahathir said in that last meet on April 10th 2015 proven right?

We will not resort to sentiment, perception and what people or WSJ wrote. The facts is he has yet to proof RM42 billion lesap.

Yes, of the 4 main items said or a close friend counted as 7, only one issue he was really interested. The rest are unjustified and he miserably failed to be convincing.

It is 1MDB and he still has not proven RM42 billion lesap. Someone in the know said, his conservative estimate after recouping money taken by Jho Loh, only RM10 lesap.

His forex failure of RM32 billion was many times worse. Probably RM100. billion at today's value.

Mahathir could not substantiate the RM42 billion. Among us are those with MBA and Accounting qualification, but those loyalist can't think independently and justified themselves by saying Mahathir knows what he is taking and believe he must have proofs.

Till today he was no proof. 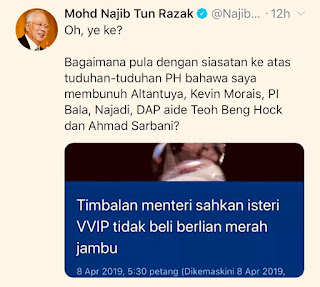 Two days ago, a Deputy Minister of Finance said there is no pink diamond.

This was the hyped up accusation claimed to have come from DOJ affidavit to California Court but it is never inside the documents.

Though quickly covered with solar case against Rosmah, it vilified the few sensible rebels among the attendee that refuse to believe him.

Our thought then when Mahathir was berating about Rosmah in the conference room at Yayasan Al Bukhary Foundation Office, he was being petty and personal.

Even how evil or improper Rosmah was then, she was being a Mak Datin. He made no mention of the solar case today, which means he does not know much.

We came to know of this case after GE14. Rosmah may kena.

The court case on SRC is not doing well. How could they add three more charges and not provide defense with documents and sufficient time to prepare.


Both Tan Sri Shafee Abdullah and Dato Yusof said the charges are not clear. Tommy Thomas novice work as Public Prosecutor stands out.

Yusof who just rejoin Najib's defense team is highly regarded and alo respected by Gopal Sri Ram and Tommy Thomas. He is factual and not the sort into pulling legal stunt.

It is crazy and shows revenge when same alleged offense is charged using three different laws. An unheard practise!

They claimed defense delaying court, but its them wasting court time by not abiding to procedure and refusing to provide documents for defense.

Perhaps, defense is in such shamble that case would be over as soon as the pass over the documents claimed Shafie.

1MDB case is supposed to commence soon but Najib is not charged for predicate offense. It is minor charges.

Heard the case will not go far. Not enough witness for the money trail.

So they will want to pun Najib on SRC. But that is not 1MDB that justify he should be toppled by Mahathir.

Mahathir could not convince us that toppling Najib is not part of his dictatorial tendency to bring people down.

He convinced Malays that he could do better for them than Najib. He claimed Najib denied Malays many things.

If so, is Mahathir dong any better with his massive plan to downsizing of civil service, kichen sinking GLCs, Tabung Haji, LTAT, PNB and Khazanah?

All have economic roles for Malays and Bumiputera.

Not to mention, budget slash for rakyat, increase in consumer prices, unemployment, lower commodity prices, market meltdown and being made international pariah by every other nations.

Did he Selamatkan Malaysia? The so-called debt problem, 1MDB, Jho Loh and boros Najib has yet to be substantiated and explained without supportive details.

He U turned on ICERD and Rom Statute out of fear. Yesterday's Constitutional Amendment failed to make it.

Anwar accused opposition but he revealed the votes for was only 138. He was asked on transition plan 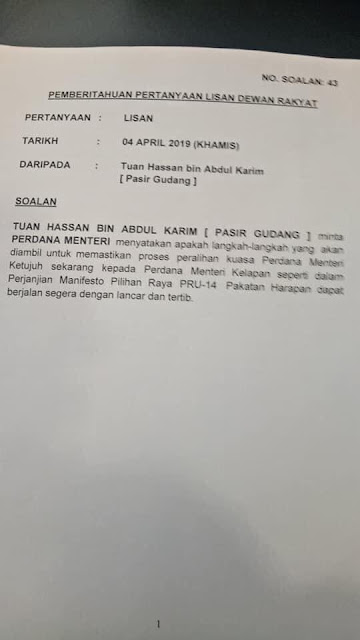 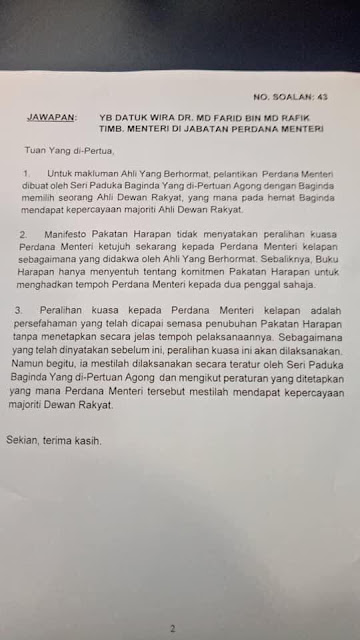 In Johor, majority controlled PH could not defend its MB and he had to step down. There had been a decree.

Mahathir will not want royalty to interfere. He has threaten TMJ and was responded to go ahead. 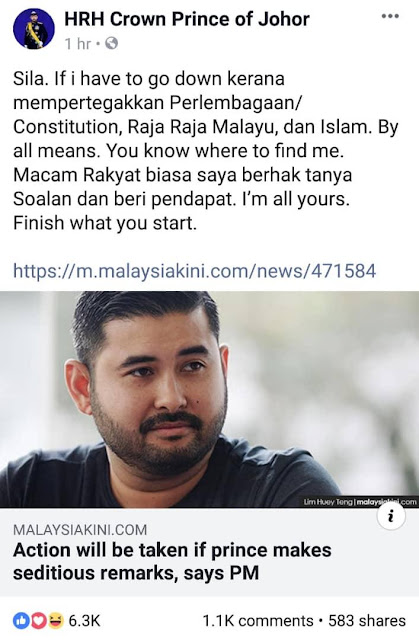 Can Mahathir use the opportunity to end the Raja-Raja as he always had the aspiration inside him to end feudel syatem to replace blind loyalty to Raja and Sultan to blind loyalty to him as his intellectually deficient followers been doing?

DAP and Anwar could support, but the implication is wider.

Mahathir's actions on CEP report and many other broken promises of PH Manifesto indicate he is not interested for the reforms advocated by DAP, PKR and PAN.

Will Mahathir still hold the majority in the house with a split in the 138 seats? 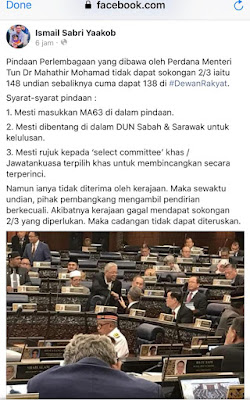 Better that he dissolve Parliament and que sera sera. 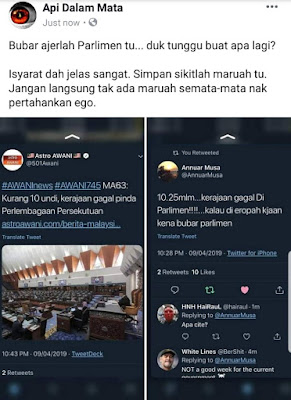 Without control, Mahathir could not do what he wanted to do and get blocked in Cabinet. Any denial that DAP is in control of government is not convincing.

But with control, Mahathir will make more mess than the hundreds of billions of mess he created over 22 years.

Slowly but surely, even his followers and PPBM members are losing trust with him and merely giving him respect but not the trust.

There are still "sangka baik" theory that he will regroup and restrengthdn power back to a united Malays.

But can we trust him to be able to do anything right anymore and not reduced to a horse saddled by his own enemies?

If he dies, PPBM will close overnight. Many have silently confided they will return back to UMNO. Even the close and loyal ones will return to UMNO. They can't stand DAP, PKR and PAN.

Victory is not prove of right or wrong. Najib has to be proven wrong in a fair trial first for their claims to believable.

The condition is there must be no judge Gopal Sri Ram can claim as "That's my boy", no politically motivated suspicious move by both investigators and court, and no blatant propaganda game by media.

In less than a year before May 8th, we are already proven right.