Care to step outside (the political arena)? 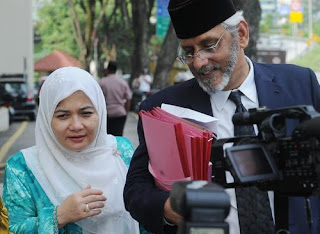 Shahnaz, who is jazz queen Dato' Sheila Majid's elder sister, had filed for divorce in February.

Newspaper report highlighted her party's trouble to serve the paper to Mahmud at his home, which means she left their marital home. Read the Malay Mail here.

The report cited one of the basis for the divorce was denial of "nafkah batin" (a subtle way of saying denial of sex) since 2001. If she had left their home, obviously they could not have sex.

This is but the usual idiosyncracies in any family dispute which is best left to be resolved privately between the departing parties.

For a couple that had separated for 10 years, the timing to file for divorce on the part of Shahnaz is uncanny. It should be better for Shahnaz as to not be seen as though she is taking advantage of the upcoming Sarawak general election.

The last the more introvert of the Majid's sisters would want is to drag other people, other parties, and the whole state of Sarawak into her personal affair.

It is undoubtedly a sensational story to hear her half of the matrimonial asset is worth RM400 million.

At last, the final settlement was around RM25 million. The real asset could likely have deducted for loans and incumbrences, and Halim's real ownership.

The sum of RM400 million sound sensational but how much is left to be divided after deducting of loans and encumbrences for division? If Mahmud is holding in trust for many other silent partner and parties, a usual practise in business, then it cannot be considered for subdivision.

Their marital problem is an open secret within certain circle of Kuala Lumpur.

As one close family friend described last night to this blogger, they hit the snag from the death of their daughter and it is believed to be interference from a third party.

Shahnaaz was described as the more introvert and less aggresive of the Majid sisters of Shahnaaz and Sheila.

Although living apart, Mahmud has been fair and responsible to provide for her and their son. He goes to the extend of buying a place for her and the son she is very attached to while he studies in London.

The anti Taib Mahmud movement and the Malaysian Civil Liberty Movement are also based in London.

After being apart for 10 years, Shahnaaz was advised to file for divorce and claimed marital asset and timed it at around the time of the Sarawak state election. More sordid and discriminating details are planned for revelation as the election progress.

If that is the case, then this is not a civil way of ending a marriage. Divborce is one halal act despised by the prophet and more so if it end in such bitter and unfriendly fashion.
at 3/15/2011 04:05:00 PM

Ya lah, brother. Why wait 10 years and just before impending elections.

She could have got a lot of money already if she was after money and sued him for half his assets. Was she still thinking of the nafkah batin and waited and waited?

Not being naughty, old boy, just being curious of the timing.

Have my sympathies for her though - for being badly treated - if one goes by her statement filed when initiating the court action.

election will be held in september lepas raya.

this case will drag on.

i have been following your blog for sometime and i find that your opinions and thoughts are fair and justified...until this article!

the wife is a victim of a billionaire who beats and kick her and go f**g around the globe.his family's wealth is the result of the most corrupted family in malaysia.

how can you show no sympathy to this lady?

btw, how much did taib pay you?

In the past when I was as ypou described as fair and justified, I used to write of not to politicise issue of faith.

There are lots of other matters in which should not be politicised.

We do not know who is wrong and who is right in a marital dispute.

Most of the time, it is not an issue of right or wrong but a matter of the heart.

Best that Shahnaaz keep politics out of her marital issue.

Do it after the election.

It got nothing to do with issue of governance.

Sure..other people's marriage but you knew better. And you speculate... It's the couple's issue, it's their timing, it's their decision...

I think your article makes a good point. That the marriage was a disaster sounds about right. But that it took until NOW to make a big deal about it, that does not sound about right. Anyone who doesn't think that there is no political agenda involved is either naive or has an agenda of their own. This issue is all about timing, and the timing is perfect for the Sarawak State election.

Not it is not their's but her's

Now is the time to get even after years of "sakit hati" and "jealousy". Besides, FIL's henchmen all gone on leave (Election coming, must hide). Otherwise she might get another beating. Timing is important. Whatever the outcome, the couple must face it. Airing of dirty linen etc. What a shame.