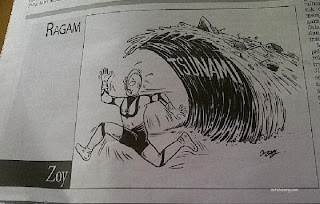 This cartoon came out on Berita Harian two days back and was picked up by CNN as making fun of the tsunami disaster beseiging Japan.

Although BH has apologised yesterday, there is no excuse to justify this senseless, and stupid act of publishing the cartoon.

In times of great sorrow and shock to our Japanese friends, where 10,000 Japanese loss their life and is now facing a looming nuclear fallout from the fire at the nuclear powerplant, it shows great insensitivity on the part of BH.

The buck has to stop at NSTP Group Editor in Chief, Dato Zainul Ariffin dan BH Group Editor, Dato Mior Kamarul Shahid to take up this responsibility for this gross negligence and embarassment.

One BH reporter claimed that this is just the pinnacle of the problem of neglect on the part of Zainul who has been so engrossed with boosting sales of NST that he had left it totally to Group Editor, Dato Mior Kamarul Shahid to handle BH.

Mior's was described as "pengecut dan lembab" (coward and slow) in his management and is spending more time going out than managing the paper.

The editors are deskbound and becoming frogs under coconut shells unable to fathom the insensitivity of that cartoon.

Zainul is in a situation described by Malay perumpamaan as "Yang dikejar tak dapat, Yang dikendung berciciran" (Neither getting the chased ones, Nor kepping the one in hand). NST is still declining in circulations.

One former NST reporter attribute the problem to Zainul's Melayu Liberal inclination or Neo Liberal philosophy that is neither giving the leadership nor the direction to attract back NST's traditional pool of readers that left dfuring Kalimullah's reign of terror.

The entire Media Prima stable is lembap. They are real donkeys. The circulation of the NST is dropping like a stone. Johan Jaafar has a ghost writer to write his column using English that even he himself cannot understand. The shape of Zainul Ariffin's English is worse than his teeth 'gigi kompang' or his 'Jawa ladang' appearance. These are the type of people they have in New Straits Times, BH and the whole Media Prima group. Below standard and below par.

A Group Editor is a Group Editor. He has to take responsibility in the first instance. There's no bloody excuse for no time to check it and such nonsense. It's utter rubbish to have allowed such stupid jokes to have come out.

Zainur has to take the ultimate responsibility. The word is pseudo liberal, not neo liberal. Pseudo means he is pretending to be liberal when in fact he is not. A liberal is a broad minded fellow. A fellow cannot be broad minded if he, for example does not see the need to level the playing field in this country. If he is that kind, irrespective of the need to get higher circulation from the nons etc, he deserves strong whacking for allowing the paper to laugh at people facing adversity. It's sadism.

Bro just to correct your first statement. It was not picked up by CNN but someone had created and submitted the news under user-submitted news section.

And also I wonder what's the real intentions of this guy, as his submission provides opportunities for chauvinists and real racists to post their damn racists comments.

You can read comments there, full of racists biased comments.

the only thing they know about newspaper is producing stories like harian metro.

The Japanese don't need our SMART team when Najib got them raring to go.

The cartoonist is the real cartoon himself - the cartoon and cartoonist amalgamated into one. So he wants publicity for BH and sales! In fact we should doakan keselamatan untuk Jepun - that is the Muslim way.

The tsunami effect of Lah the sleepyhead and Mullah the kali is not over yet. Zainur and Mior are but dereliction of duty and incompetent. Don't let your shortcomings bring shame to the nation!

It is worst than Gutter Journalism . . . .and should be coined as Sewage Journalism..

Bro, just like there are so many grammatical errors in this particular posting of yours and in almost everything you write, Datuk Mior is only human and makes mistakes too. Errors in judgment happen to all writers and editors.

Does writing behind annonymity give you the right to write anything and everything about anyone?

Are you a Muslim?

Isn't there an Editor for Berita Harian? That's the bloke who should be held by the collar and kicked in the ass. Irrespective of anybody writing to CNN about it or his intention in doing so.

Agree with the view that the NST group has been one hamsap bunch of incompetent fellows, sometimes even the English in NST is also wanting. I have long wondered why such fellows were appointed in the first place. If the object was liberalism and placing so-called neo or pseudo liberals, I think it was misplaced.

The powers that be ought to know that even in UK where liberalism has been practised for centuries, their perception of national interest has taken a new meaning in recent times. Prime Minister David Cameroon has recently announced that multiculturalism is dead. This was echoed by Chancellor Angela Merckel of Germany.

Someone wanted to equate and criticise my common grammatical mistake with the mistake of publishing that cartoon.

My grammatical problem is because I could never excel in languages since school. I am a classic right brainer.

Publishing that cartoon is not about incompetency but plain stupidity and systematic neglect by GEIC.

The GEIC have been too focused at boosting sales at NST without due consideration to move away from the legacy of Kalimullah.

Is it possible that the same thinking persists in the appointment of the NST Group so-called neo liberals or pseudo liberals as there was during Tun Dol's time? Were they Tun Dol's appointees, Kalimullah's legacy and all?

Since the time of Fleet Group I thought NST ownership and line had been that of the powers that be in UMNO. If so, are the present batch of Editors, Editor in Chief and what have you not DS Najib's appointees? If so, perhaps it reflects Najib's thinking, doesn't it. If so, it's pseudo liberal, too, isn't it. Excuse the too many questions, old chap. It's better than too many accusations, isn't it. No need to reply and they may be rhetorical questions, though it's your prerogative to do so.

If not, they would have "move(d) away from the legacy of Kalimullah" a long time ago.

I like the word pseudo liberal better than neo liberal. The latter conjures images of the bloody neo cons of the hideous but powerful Jewish Lobby in the US pushing stupid boy George Bush to declare war on Iraq for which no WMD is found until today.

Have a good morning, friend.

No problem with your English, brother. There's the Word or whatever automatic correction system that can be resorted to, anyway.

It's substance over form, my friend. Yours is blogosphere and is not the traditional mass media format where form is also important. Especially when they want to attract readers/ buyers.

And their substance is also lacking in many instances. Sometimes reports do not provide any background when such may be benecessary.

Enuf said for the morning. Cheers.

From The Straits Times of the early 70's to The New Straits Times, i stopped reading NST since 1998...bias and unfair reporting is not for me. So goodbye NST..

with senior editors like these guys, no wonder NST and BH circulations keep falling down and harian metro sold like goreng pisang

ps sorry for my grammar.

While I do agree with the insessitivity of the cartoonist, one have to think