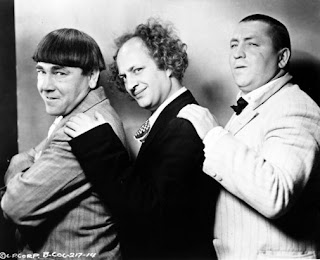 The best to describe the move by the trio Dato T is dumb.

The announced they will send the video within 7 days for Anwar and Datin Seri Wan Azizah's verification. Subsequently, they demanded Anwar and Wan Azizah to quit from politics.

That was fine until these three stooges decided to show the video to PKR MP for Sungai Petani, Johari Abdul, whom is anak buah to Dato Shuib Lazim.

Even if it to settle ole score, never lose one's head and end up with the message lost.

Currently, they have helped to revive the reformasi PKR spirit and provided ammo for them to claim there was a Government conspiracy against Anwar. Although this amateurish feat is most unlikely to have the hands of Government or Prime Minister, their propagandist will still insist such.

More so with controversial Rahim and Shuib are UMNO former leaders with Rahim having an ole score with Anwar.

The issue of Anwar's morality and sexual tryst with a prostitute could be diffused. Do not expect the rakyat to take our side because they have not seen the video.

Anwar and his supporters have conveniently and immediately denied. They are already on a campaign. If not adressed, Anwar's boys will have a long lead to influence teh voting public.

This is counter productive to Najib's effort to show of a more friendly and people caring Government.

The trio could have waited for a better timing since things were turning up fine in the courts. Their stupidity has upset the effort of bloggers and media players in putting BN on the advantage in the psywar.

This is nothing but sheer dumb!

It was a naive move to show to Johari because he is a hardcore staunch Anwarista. He even resort to Azmin-like manipulation at the PKR Cabang election to remain as Cabang Chief. The man is high in Anwar's cai for National level Committee.

Are we so naive as to not see that?

Tan Sri Rahim Tamby Chik claimed yesterday that Johari acknowledged the person in the video to be Anwar. What is the relevence?

As a matter of fact, it is too late because Johari has revealed on them earlier. And that forced Rahim to reveal themselves. Isn't that bodoh and dumb?

If you have a script, stick to the script. Do not bring elements to disrupt your script. In this case, showing it to Johari Abdul is dumb and naive.

So what he is your anak buah? Can't they size him up properly.

If they can't, then stay retired and out of the game. Let somebody who knows who it works today do it.

This blogger is not saying it from an armchair. This is talking from experiance.

They could have met with people in the know or some bloggers who are master at making an issue out of something like this. It is not just posting on blogs only. Syyy .... trade secret.

What Dato T should do is now find a way to get as many rakyat to see it and publish still pictures from the video to convince them that it is undoubtedly Anwar Ibrahim!

If they are going to be charged for distributing pornography, they deserve to be in the slammer for being dumb. What matters to them now is to stay true to their words to save Malaysia from a man with no moral to fill-in the Prime Ministership post.

For the media players, this sex video has got nothing to with any other issue or persons but about two dumb has-been politicians unaware of today's psywar game and a businessman for trusting prehistoric method practitioners of psy war trying to memandai-mandai.

The video revealed a man, strongly believed to be Anwar Ibrahim and acknowledged by DAP-sympathiser Star Chief editor, Dato Wong Chun Wai, in a compromising position in an immoral sex act with a prostitute.

Let's not lose focus on convincing the rakyat. And do it fast. Betul-betul menyusahkan orang tua-tua ni.

Could not have been said any better. I am puzzled as well.

The trio now have their work cut out to prove its authenticity to mitigate a very delicate situation.

Damage has been done. Guilty by association

Damage control for BN in general and UMNO in particular as the advantage has swung to the PKR.

The tape being fake looks to be a better prospect (for BN and UMNO) as culpability would then fall on the trio of in their personal capacity.

Mistakes had been done and the best way to correct it is by allowing the police to do the investigation.

Without doubt this whole episode may affect the election mood in S'wak which is scheduled to be held on April 16.

What we can do now is to pray for the best and allow the authorities to do their work..

yeah.. agree with u.. they are nothing more than just dumb, dumber, and dumbest

Hi brother;
The exposure by the Trio is definitely flawed, miscalculated and has all the trappings to backfire. Had the exposure be surreptiously done and the Trio kept quietly behind the scene, the effect cold have been devastating against AI. But now he can exploit this exposure to his advantage - particulalrly religiously.
So says Dzulman Anonymosly from Shah Alam.

can you find out who is the owner of this spa and which party he is linked to.

to get a video of this vvip is a big time agenda bro.

You are right, the three men are blinking amateurish to the extent that the whole thing looks like a bad comedy and nobody is laughing.

I agree this episode looks bad on BN and to think that two of them are known UMNO members! They have brought shame to the party by involving in an illegal activity "being in possession of pornographic materials" this in itself is enough for UMNO to publicly sanction them so that the public can begin to understand that this whole caper is not planned by UMNO as a party.

indeed these three stooges screwed up a brilliant plan to destroy anwar once and for all.

they revealed their hand too early. worse, RTC appeared in a press conference with dato shazryl by his side. i was told some reporters were snickering shazryl could be the person in the video, as he looked alike to anwar. they should have sent shazryl to a villa in some ulu part of thailand or perlis or kedah, instead of let him make press statement that only trap himself.

now things are getting bad to worse for us. all effort must be made to prevent the trio from implicating peoples up the ladder. the trail must end with them, but i fear the damage has been done in the mind of the publics.

If you entrust The Three Stooges to do serious stuffs then this is the result. Its pay back time for RTC, someone else was sent to jail for his crime and sins, now the Almighty has caught up with him.