The night it rained chicken butts 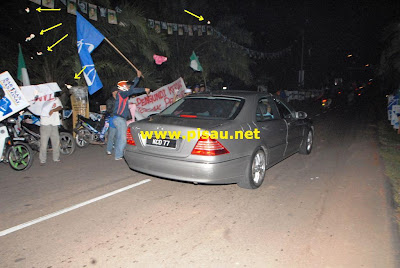 A group of bloggers met up with Ummi Hafilda at some secluded restaurant in Petaling Jaya last month. The meeting was somewhat clandestine in manner. Other than few foreigners, hardly any other clients visited the restaurant during our time with Ummi.

For few hours, she exposed the whole sordid affair of Anwar Ibrahim, Azmin Ali and Shamsidar.

The intimate details she shared with us was more shocking than what have already been made known to most Malaysians; be it in her own expose in the press, newspaper report on the court room proceeding back in 1998, blogs, etc.

Even for some of us familiar with the case, there was a lot of details that missed us. For instance, Ummi Hafilda, Azizan Abu Bakar and Dr Ristina was harrassed for six continous months by Anwar's Special Branch to "turnover" her allegation.

There was quite a bit of frank exchanges and at one moment, tears was spotted flowing from Ummi's eye as she described the ordeal she had to undergo as a single lady.

One never deny the tears of a woman.

At one moment, she expressed a 13-year dream to be able to confront Anwar in public. Better still if it is a political rally and she is given a microphone or hailer to exchange words with Anwar.

In a trip to Merlimau a week ago, the same idea cropped up over makan-makan and this blogger shared Ummi's dream of wanting to do a face-to-face with Anwar.

For some strike of luck, it was not Merlimau but Kerdau that got that honour or if the votes come out unexpectedly, the dishonour. At the time this blogger was in Kerdau in the middle of the week, we were alerted by our source of Anwar's plan for Kerdau.

He had visit Merlimau the night before and it immediately disproves talk that PAS had request Anwar not to come. With his sodomy II "trial within the trial" tanking all the way, it would be typically Anwar to do a rally to spin his predicament into a victim situation or conspiracy story.

We made few calls to people able to hook up with Ummi and rally organisers and it was set. The Merlimau's crowd loss is Kerdau's gain.

The political rally was located at one of UMNO's Markas and PAS had placed their rally right smack across the road to UMNO's Markas.

This blogger was back in KL that morning and had only managed to leave for Kerdau after Magrib. By the time this blogger reach the UMNO Markas, Ummi was already speaking. Told later, that Ummi started first and she spoke before Anwar and ended after Anwar left.

Since it was impossible to get parking with cars lining up miles and miles on both sides of the road. Neither is this blogger willing to walk that far. So we decide to go back and forth to get glimpses of what was happening.

By the second turn, Anwar's voice was heard coming from the PAS side. But his tone of voice was not his usual tone. It is like someone under attack but had to keep his composure so as to not lose his cool in front of the hungry cameras and video recorders.

After a while, Anwar can't take this distraction and ended his speech. Who could with Ummi going like a machine gun blurting words without any restraints. Hear this video from Parpukari below:

At the time Anwar was bading farewell, our car was in the vicinity and we immediately sped off to Felda Jengka 23 for Anwar's second rally. That must be uncustommary of Anwar to speak for half in hour. 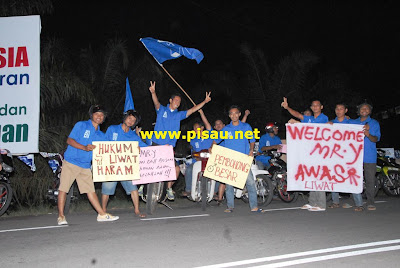 As we approached the entrance into the Felda Jengka 23 kampung, we spotted a group of young boys with banners and in a boisterous mood. We stopped and decide to see what they have in store for Anwar. 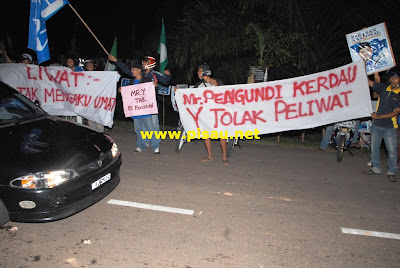 Expectedly Anwar's entourage came. He must have thought these boys were there to welcome him. He drew his window down and in a swift, lot of small white stuff (that is what we saw from far) rained on him. It can't be stones as Harakah tried to spinned it as. There is no loud or smashing sound.

When it was over, this blogger walked over to see what was thrown on the road. It was chicken butts. How symbolic?

We can't stopped laughing trying to imagine Anwar's surprise to be thrown chicken butts right at his face.

After a while, there was another entourage bringing Ummi came by and they zoomed into the Kampung.

The crowd in Felda Jengka went wild. They were louder and encouraging Ummi on. 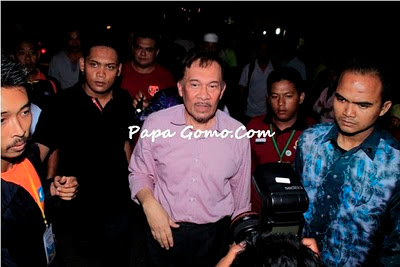 Anwar's speech there was short too. And his face don't look too good. He had just crossed path with Ummi.

They say, hell has no fury like a woman scorned. Even Abbasid dynasty split apart.

Anwar has incite the fury of many.

That night fulfilled Ummi's sweet 13 year revenge. She called the next morning.

It also unleashed the pent-up feeling of many who fought Anwar and his antics through the last 13 years. We know of many.

But we just enjoyed the fun. We know that night had nothing to do with politics or democrasy or campaign issues, it was just out of fun.

Ha ha ha chicken butts !!!! Whose brilliant idea was that? It really hit the nail.

are you ok, saudara anwar.

ishamudin and saberi chik should take debate lesson from umi. especially how to control their airliur.

lucky anwar to get thrown with fresh chicken butts.

david cameron gets rotten eggs while george bush gets a smelly shoes.

can you and your blogger friends arrange for a anwar/azmin vs ezam/umi debate.

i dont mind paying for the ticket as i am sure it will be fun.

I'm sure anwar would prefer bontot kuali hit his face rather than this.

Wonder if CNN pick up this news and john malott and al gore watch it the next morning.

No one denies the tears of a woman...But a fat crocodile? No thanks you can keep her tears and your bullshit to yourself

Mr BUTTman must in rage after that embarrassing night. Remind me of an episode from an old comedy series” In Living Colors". This would definitely cheer up Mr BUTTman:-

This is stale story la.Why you like to write recycle story.
She had family problem with Azmin.She need attention after Daim and Mahathir abandon her.Her credibility is questionable and no body care about her.

She totally broke.Her resturant business fail.her advertising business fail.She won defamation suit against PAS and the award money was paid to her lawyer Shafie Abdullah,but after Shafee deduct his legal fees,there is nothing left for her.She is suing Shafee.

Umi need money and attention.I was really suprise TS Mahayuddin and UMNO think she is an asset for UMNO.Majority of the Malay think she is trash.

If you don't like what Ummi is saying, why don't you advise your idol Anwar to sue her and take her to court afterall that's what she is asking for.
Why is that your idol Anwar is free to slander his political rivals why others cannot say the same of him.
Even if the sun is shining in the sky and if you choose to close your eyes you won't see a damn.
I have nothing against those who supports Anwar but let's be fair.

if anuar did the chicken butt, instead of human butt, he won't be in so much trouble.