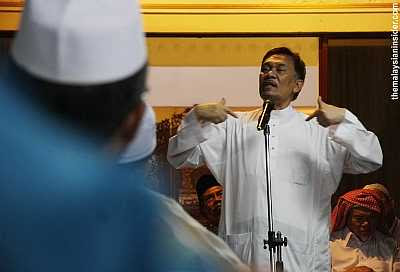 Anwar addresses a crowd at his Segambut home,
March 24, 2011. — Picture by Choo Choy May
From sex video, a galvanised Pakatan

But a quick survey of the compound saw more than half of the men clad in robes or baju Melayus absorbed in reading a chronological account of events in the sex video saga where Anwar is allegedly shown having sex with a prostitute.

Curiosity, especially within the Malay public, has been piqued and this is viewed positively by Pakatan Rakyat (PR), who will be holding a series of rallies in the coming week that will see it go on the offensive, accusing Umno of gutter politics.

“The sex video is shrouded in doubt. This has opened the way for us to reach the public, especially the Malays who want to find out more,” PKR secretary-general Saifuddin Nasution told The Malaysian Insider.

Pix: Umno has moved to keep Rahim at arm’s length.

Last night, Anwar held prayers at his home and had catered for 250 Muslims to come for a night of sermons, but the opposition leader later had to apologise to the 400 who came for being ill-prepared for the crowd.

If the video is — as PR claims — an Umno ploy, then it may well backfire as pact now appear to have been galvanised.

Anwar is in his element when under siege and issues quickly become platforms for the PKR de facto leader, as was seen when tens of thousands protested his 1998 sacking as deputy prime minister.

His party has responded swiftly to seize the initiative since the video first surfaced on Monday, alleging Prime Minister Datuk Seri Najib Razak’s involvement with the trio, collectively known as “Datuk T”, behind the 21-minute tape.

PKR’s claims of dirty politics by Umno has gained credence when Tan Sri Abdul Rahim Thamby Chik, who had to resign in 1994 as Malacca chief minister after accusations of statutory rape, admitted that he was part of “Datuk T.”

Umno, too, has seen the potential damage and has been quick to distance itself from its former Youth chief, insisting that Abdul Rahim was acting in his personal capacity.

Significantly, even PAS now seems to be firmly by Anwar’s side after talk of uneasiness with PKR following a string of by-election defeats in Malay-majority seats.

When a reporter asked Anwar on Tuesday if he should swear on the Quran that he was not the man in a sex video that surfaced the day before, it was PAS president Datuk Seri Abdul Hadi Awang who insisted on fielding the question.

“Let me answer this,” he told Anwar at the press conference, before launching into a short sermon on Syariah law.

“We were surprised. Hadi is usually very reserved but I think he has had enough,” said PKR deputy president Azmin Ali. 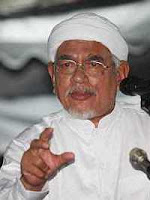 The normally calm Abdul Hadi has been on a warpath since.

In a sermon that night in Taman Medan, Petaling Jaya, he spent over 20 minutes of a fiery speech claiming that the ruling Barisan Nasional (BN) was indulging in gutter politics to bring down Opposition Leader Anwar, who is also facing an ongoing sodomy trial.

Pix: Hadi has found an unusual fervour for defending Anwar.

According to Saifuddin, the ceramah drew a crowd of 5,000 — over 20 per cent more than expected.

Abdul Hadi has been seen as being cool about his Islamic party’s relationship with Anwar, unlike the “Erdogan” camp in PAS that is said to support the embattled PKR de facto leader at all cost.

Anwar finding an unexpected champion in Abdul Hadi to fight the latest allegation of sexual misconduct is the clearest sign that the opposition coalition still has plenty of puff left in it.

Azmin’s sister, Ummi Hafilda, who has accused Anwar of sexual misconduct over the past 13 years, has claimed that there are 18 more sex videos of the Permatang Pauh MP.

I dont really know,but they look like animals being conered and are fighting tooth and nail for their survival.

“They can have 188 more sex videos and it would not matter.”

This statement says it all

May be not to you but to most of us yes...it matters. We dont want this kind of buggers and fuckers
to represent us in the Muslim world.

You write in a very cunning devious manner. It's already proven it came from UMNO. Now trying to push the buck to PM.
How mischievious.

not bullet but nuclear

Saya setuju dengan kenyataan Bro.Desperate to be a hero,Rahim Thamby gave Pakatan not the bullets but the canon.

All commentator misread this posting.

Is the video an UMNO game? No, UMNO is not that smart these days to do such things.

Is the video a Government game? NO also. It is too stupid and sloppy.

Government does not need any extra push to rid of Anwar. He is pushing himself into Sg Buloh by himself.

This can only be RTC's game.

It can't be Shuib Lazim. Neither is it Eskay's game although he is an important player.

If this is the planned game being played, it is a stupid one.

It allowed PKR to take advantage of it.

I detest Anwar and do not want him as a leader ever. But this Rahim Tamby is another one.

It's good that the Police arrested Rahim Tamby. He has been the one who started this mess, coming out in the news under the name of Datuk T and all. He had the video which had been confiscated by the Police. Had he been sincere about it from the beginning, he would have voluntarily handed it to the Police, not after the nearly 5 hours of interrogation. But it would have been contrary to his intent, wouldn't it?

Whatever his motive may be, it's such a lowly, cowardly and despicable act on the part of Rahim Tamby. A person carrying the title of Tan Sri. No doubt not all Tan Sris are of reputable character. A few have even brought the name of the country down with shame. He was simply lucky to be in the group of Menteri Besars and Chief Minister that Mahathir one day decided to give the Tan Sri title for whatever political aim Mahathir had at that time. But Rahim Tamby should have tried to live up to the honorary title. And his former official title of Chief Minister of Melaka.

But then he has been of questionable repute even as a Chief Minister. His wild escapades and illicit relations with the opposite sex were reported in the papers a lot. They have led to his resignation from the Chief Minister's post. Resigned in ignominy, dishonour. What a bloke. (Anyone not familiar with the use of the word and not feeling easy about it being used on a so-called Tan Sri, pls note that the dictionary defines it as "man, fellow, chap ..").

A Voice thinks of the bloke being "desperate to be a hero", others say he is vengeful on Anwar who, as DPM, pressured him to resign from the Chief Minister's post. I say let both of them land in the gutter so as not to smear the name of the Malays any more. These two are poor specimen of the Malay race and we can all do without them. I'm hoping that Sodomy II Anwar will settle down in Sungai Buluh till the end of his days and that the current Police investigations will lead Rahim Tamby to join Anwar there to play strip poker or whatever for a good number of years. In Sungai Buloh, they would not likely be in the news and the Malays need not be shamed any more.

And I hope UMNO can ride this one out against the Pakatan onslaught. They are sharp bullets but let's hope some would ricochet and hit Anwar and Rahim Tamby back. So many among the members of the public are fed up with dirty politics, corruption, cronyism, sex scandals and endless Commission of Enquiries that quite a number will just say "kalau tak ada angin tak kan cabang bergerak", and just think of Anwar - and Rahim Tamby - as dirty scoundrels. I won't really mind if they do, irrespective of the outcome of Sodomy II court case and the Police investigations into the stupid Trio (the word stupid has been used by many and I agree).

I don't understand how come got one blog saying


But The star reported IGP saying no arrest -

KUALA LUMPUR: Police have arrested three men in connection with the sex video allegedly involving a prominent opposition politician having sex with a foreign prostitute.

Royal Malaysia Police secretary Deputy Commissioner Datuk Ghazali Md Amin, without revealing the identities of those arrested, said police obtained several items as evidence from two of them.
All three have since been released on bail pending investigations.


Inspector-General of police Tan Sri Ismail Omar said police were also trying to determine the identity of the people seen in the video as well the person who recorded it.

“There are a few things we are looking into right now,” he said when speaking to reporters after attending the 204th Police Day celebration at the Police Training Centre (Pulapol) Friday.

On Thursday, Abdul Rahim and Eskay turned over the original sex video and an Omega wristwatch to the police at Dang Wangi police headquarters.

When asked why the duo were not arrested when they went to the police headquarters, Ismail said: “What offence (did they commit) you tell me”.

However, he added, if investigations showed that the trio were involved, and if there was sufficient evidence, police would arrest them.