In defense of Rahim 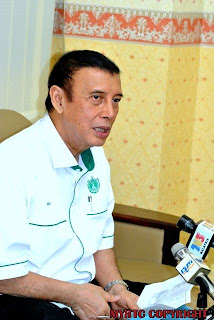 Tan Sri Rahim Tamby Chik should not have been seen to be involve for it would be easily manipulated by Dato Seri Anwar Ibrahim and the opposition.

Rahim should have stayed in the background and provide the support, rather than being in the forefront. Even if it is to settle an old score, he should have kept his cool.

There is a long list of things he should not have done and for many reasons. Why then did he do it in such manner?

Upon reviewing the event again and discarding the reaction of Anwar and his bunch of liars, Rahim was actually being fair to Anwar.

The Melayu in him was still holding back from all out aibkan (bringing shame) another person.

The Melayu in him was still saying that even if he was a victim of Anwar's deceitful politics, he shouldn't be vengeful and accept the end of his political career as faithed.

Rahim understood that the happening is a private matter. However, a future leader must not have dark secret in his closet that will compromise the country.

The Dato T trio invited only selective people for the viewing; editors, newspaper reporters, and politicians. It is not for all but limited few.

Rahim was fair to invite also the opposition and opposition-inclined editors, newspaper reporters and politicians.

Subsequently, the trio issued a statement to say they will be giving a copy to Anwar and Datin Seri Wan Azizah for verification. Isn't that fair?

Before one accused the person, one give the person a chance to see it and verify. Both Anwar and Wan Azizah were requested to resign immediately after verifying the video. If Anwar is a person of low moral and unworthy of high office and leadership of this country, he and his abetting wife should resign from all political posts.

Fair and square. But why did Rahim decide to appear?

Maybe they never planned to appear yet, but Johari Abdul blow their cover and announced it as them. Nevertheless, since Rahim met those people viewing the video, it only means he wants to appear.

Come to think of it, Rahim had gone through his punishment. He quit from his illustrous post as Chief Minister of Melaka in 1994 and subsequently from UMNO Youth Chief in 1996. Any attempt to return has been short lived.

One Dato' Mufti met told this blogger that Rahim confessed to him that he regretted his past doing and accepted his faith. So why should he be held back by his past?

In the first place, Rahim should have been curious as to why Dato Shazryl Eskay suddenly came up with such a video? Despite being known to get oppurtunity from Tun Dr Mahathir, Eskay is a closer associate of Anwar Ibrahim.

There are more background details about Eskay that this blogger have uncovered from some of his business associates. Rahim and Dato Shuib Lazim should have known better than to be too trusting.

Then again, people without ill-intent tend to be too trusting.

Rahim should have consulted people in power and in the know before calling that viewing in Carcosa. They would have told him that such expose was not necessary because Anwar's court case was not doing fine.

The viewing should not be held at Carcosa and booked by a Risda officer, I was told. Carcosa was inappropriate. It is the sort of place for Mat Salleh and perasan Mat Salleh have tea and scones.

Rahim could have emulated the method sex video of Dato Seri Chua Soi Lek was exposed; by passing out VCD in a selected area than let it have a life of it's own and eventually ended up on the Internet.

Faster still, Rahim could have uploaded the video on a video sharing websites other than You-Tube. You-Tube does not allow pornography.

It is unlike now where the public has not seen it. Pakatan is enjoying a revival of interest from this sex video by accusing fitnah II. All because the public could not judge themselves, unlike the Soi Lek tape.

Because it is Rahim, UMNO is being accused of conspiracy to slander Anwar for the secon dtime.

Some kind of lawful mechanism or that by-pass our law mechanism be used to make the public see for themselves and verify that the person nourishiung on the China doll is Anwar Ibrahim.

Dato Zaid Ibrahim viewed that if the video is genuine i.e. no technological trick, the fine "2 shots in 20 minutes and still standing" performance is Anwar Ibrahim.

Zaid urged the Government to authenticate the video fast and stopped the public confusion. This we agree with Zaid Ibrahim.

SUNGAI PETANI: The Govern­ment should quickly establish the authenticity of the sex video of a man resembling Datuk Seri Anwar Ibrahim and a woman who is believed to be a prostitute, Kita president Datuk Zaid Ibrahim said.

He said the Government should do so fast, otherwise it would be bad for the nation and its leadership.

He again suggested that the Government get foreign help to establish the authenticity of the video.

Zaid said dragging the issue too long would also be unfair to Anwar.

“This is what I am saying now but whether the video is genuine or not, that’s for the experts to determine,” he said after opening Kita’s Kedah headquarters at Taman Tunku Haminah here on Friday.

Zaid admitted that he watched the video during the screening for media members at Carcosa Seri Negara on Monday, but said he did not know why representatives from selected media were invited for the screening.

When asked why he watched the video as he should know it is a criminal offence to do so since he is a lawyer, Zaid replied that he treated the video as a documentary and not pornography.

Mind you, Rahim is not the same man from the past. He is late in his 60s and is aware that it is a sin to aibkan (bring shame) someone.

Rahim was sincere to tell Anwar and Wan Azizah politely to just leave the political scene than make more damage to the country.

However, it can be understood that with perception built up over the years and prejudice against Rahim is too ingrained, it is difficult to believe and agree to those possibilities.
at 3/28/2011 11:51:00 AM

Bagus jugak...So when can we ask Chua Soil Lek to stepped down from MCA?

Malaysia is a laughing stock.

Rahim Thambychik involvement as Datuk T is the case of "Johny want to comeback". The storm in the UMNO/BN tea cup has being calmed and pacified by Najib and things beginning to look rosy. He wanted to be back in UMNO inner circle, and to revive back elitist group in UMNO ala Team Wawasan....boleh belahlah lu boring old faggot and those UMNO elites.

RTC was once alleged to be involved in a sex scandal too. So like the saying goes, it takes a thief to catch a thief. For that reason I believe RTC is not lying this time this time...

I think the whole premise of their intention -- damaging info that would have coerce both AI & WA to capitulate & resign -- was way off its mark.

You can only use a moral weapon on those who have a high regard for honour. AI definitely has none. WA despite her pious tudung & glove appearance too have none. What women would condone a bisexual , abusive, philandering husband who also fathered a child from his own right-hand man's wife?

Some say, she wants to "jaga nama keluarga" thus gritting her teeth to all these. But no way-lah. Any woman worth her salt, what more supposedly an educated (eye specialist)like her would have ditched that SOB within a blink of an eye.

So bottomline, because the Three Datos used "holy water" against fire-breathing "demons", it is they who are now "toast"

RTC trying to make his Comeback Kid moment. Whole thing back fired and exploded in his face. Padan muka.

Jasmi and ismee, dua dua perompak. BALA is waiting for both of them, slowly BUT surely!

so what is the difference between RTC action and ummi halfida ceramah using umno platform.

ps - i'm not anwar fan either but BN need a cleaner political image come the next GE.

did najib lost control on this matter.

Rahim has not been known to be a smart fellow, has he? If he was smart, he wouldn't have been found to have those scandalous affairs as Chief Minister. We'll never know if he had been screwing in his CM office even.

But this video thing - it's so badly done that Anwarul Jalan Belakang can turn it kebelakang and Rahim gets sodomised.

Agree with the view that he shouldn't have exposed himself. Let the goons leak it out or do an MCA sex video distribution style.

And if it was true the room was booked by a RISDA Officer, that's the ultimate stupidity lah. Maybe that information is the tembak-saja kind. But Rahim's past record shows that possibility cannot be precluded.

How now, leave it to Police to complete their investigation? Where got possible? Agree with the view that we Malaysians even discuss matters that are at the Courts. But, if it's about Anwarul Jalan Belakang, I don't mind it at all, brader.

Yesterday at Stadium Melawati, thousands of people came to support DSAI against this trial by media. I am happy to report that AI's popularity increased. Konspirasi II...

I think I submitted a comment quite critical of RTC but don't see it published. I wonder why.

It'll be good for guidance if you state the reason. You can reply to my email add which I believe you can trace from my comment submission.

I don't owe anyone a reason.

This is my blog and I decide if the comment is suitable for release.

I allow critical comment against my posting but only on my posting, NOT against me.

I do allow chilish and immature comment if I tolerate it.

It is all my call.

There is no democrasy because this is my private domain.