Sarkar on judge's power to order for DNA sample 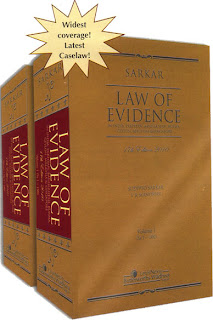 Nothing piss a lawyer off than those untrained trying to write agreements or interpret the law by themselves. Lawyers have valid reasons to demand so but for some sneeky feeling, one could not discount the possibility of commercial reason being considered.

Never mind, there will be no attempt to interpret the law of evidence, Evidence Act 1950 with regard to Anwar's Sodomy II case by ourselves. What is written will be based on learned experiance and view of a lawyer friend.

The court had just detoured the prosecution plan to get Anwar based on forensic evidence of DNA found in Saiful's rectum that is supposed to match DNA samples left by Anwar on three items used in the detention lock-up - a "Good Morning" towel, toothbrush, and mineral water.

Supposedly there is nothing sinister about the samples. It is usual to gather such type of evidences and in that manner from suspected rapist and sodomites. The legal basis is similar to other method of collecting evidences.

No suspects in the world will voluntarily give evidences that will incriminate them in the court of law. So police work is essentially to collect evidence involuntarily left behind. Evidence collected is what in legal circle (although not sure in Malaysia) described as abandoned rights.

Last week, the prosecution applied to the court to order Anwar to give his samples. Anwar's response was typical politics as he tries to detour attention to alleged link of Najib and Rosmah in the death of Altantunya which has no relation to his case. Nice try but the public won't buy that.

As e-mailed by our legal source, the application by the prosecution should be based on two clauses - Section 73 and 165 of the Evidence Act 1950.

Clause Section 73 empowers the court to direct anyone to provide signature, writing or seal samples for comparisan with those found left behind at the scene of the crime. Read S 73 below:

Comparison of signature, writing or seal with others admitted or proved

(3) This section applies also, with any necessary modifications, to finger impressions.

Section 165 of the same Act empower discretion on the judge to order Anwar to give his DNA sample. It is basically saying that the judge ultimate responsibility is to see justice is done and truth is unveiled.

165. The Judge may, in order to discover or to obtain proper proof of relevant facts, ask any question he pleases, in any form at any time, of any witness or of the parties, about any fact relevant or irrelevant; and may order the production of any document or thing; and neither the parties nor their agents shall be entitled to make any objection to any such question or order, nor, without the leave of the court, to cross-examine any witness upon any answer given in reply to any such question:

(i) the judgment must be based upon facts declared by this Act to be relevant and duly proved;

(ii) this section shall not authorize any Judge to compel any witness to answer any question or to produce any document which the witness would be entitled to refuse to answer or produce under sections 121 to 131 if the question were asked or the document were called for by the adverse party; nor shall the Judge ask any question which it would be improper for any other person to ask under section 148 or 149; nor shall he dispense with the primary evidence of any document, except in the cases hereinbefore excepted.

Sarkar's Law of Evidence is quite clear on this particular clause. Few quotes below:

From the many authorities quote before, it is quite clear that under S 73 that the court may direct any person present (including the accused to) to give specimen writing or finger impression for the prupose of comparison. - pg 1319

For when he is exhibited voluntarily or by order, and even if the order goes to far, the evidence, if material, is competent. - pg 1320

The chief function of a judge is to see that justice is done between parties, and a too rigid adherence to set rules may sometime embarass the judge in the performance of his duties and defeat the end of justice. - pg 2488

He has a much higher duty to perform. He has to see not only is the proceeding is conducted strictly in accordance with the law, but to administer justice and to find out the truth. - pg 2489

With this object, the judge may also direct the production of any documents or thing. - pg 2489

It is not our personal opinion or attempt to play lawyer but quotes from an authority of law.

The court proceeding has established using oral evidence without much resistance from the defense team and any denial from Anwar that Saiful was sodomised by Anwar.

Medical examination had been done at it was found specimen of semen in Saiful's rectum and one dominant DNA found is not that of Saiful. The DNA profile from the semen was derived.

Supposedly the DNA profile of samples obtained left behind "voluntarily" by the suspect should match with the DNA profile from the semen, if the judge had rejected the evidence in the "trail within trial".

DNA forensic testing serves that purpose as in to identify the DNA found at a scene of a crime with that of a person.

DNA testing has the highest probablity value and on par with finger print. It's application is more versatile and wider application.

If Anwar is cooperative and gives his samples for testing without much wayang, it will answer and end all speculation of Anwar's guilt once and for all.

If he is innocent, the DNA will prove it. There is no need to beat about the bush. All ends here including so-called claim of prejudice against Anwar.

Politically, this is the opportunity for the leader of the justice party to prove he is a fighter of justice. What more when it is himself that is on the line.

Otherwise, it will be seen that proper application of law is only relevant on others but not on himself. He is beyond the law and it is up to his whims and fancy. Correct correct ...?

If Anwar refuse to uphold justice, then it is incumbent on the judge to not astray from his responsibility.

Brader, no chance for the justice party fellow to want to do anything else than fight for his life. It's his life at stake, man, because all his life he wants what he wants - Putrajaya. Even katak lompat way, Sept 16 coup d'etat way. It seems to me that he is capable of selling his mother if shove comes to shovel, or shovel comes to congkil, or ungkit or songket.

So why not use Section 165. Justice muust be done and seen to be done. Whether it's so-called trumped-up charges or politically motivated prosecution, be done with it for the sake of justice and the rakyat wanting closure to this whole episode of bontoting. If it's not his semen, why should he worry.

All these delaying tactics employed by the prosecution for so long now in fact have been to his disfavour. But he cares not, for to him it is his survival, political or whatever. For goodness sake, have it done away with and Section 165 is there to go by in the legal manner.

And if they have valid arguments against it, pray tell.

This is what I heard from a well known lawyer.

As it stands, there is no prima facie case against DSAI as the prosecution have not been able to link DNA evidence with DSAI or the presence of DSAI and Saiful in the same Damansara apartment at the same time!

So, the court cannot compel DSAI to do anything in the absence of probable cause.

Also Sarkar applies to witnesses/parties who have been sworn in and testified under oath. DSAI has not been callled to testify - Yet!

So, again, the court cannot compel DSAI in the absence of probable cause, more so since the police and SCG have made no attempt to identfy other DNA ("half a football team's") found in Saiful's rectum, compromised further by CPO Jude's deliberately flouting the law and breaking the chain of ecidence. There are also elements of a clear political conspiracy with Saiful meeting PM & wife, aides, Ezam, Rodwan etc. BEFORE 26th June 2008!

We'll see what Judge Zabidin eventually decides soon enough and whether a new precedent is set!

dpp
we are all of 1 Race, the Human race

Bro,
It's Sarkar, nor Sharkar.