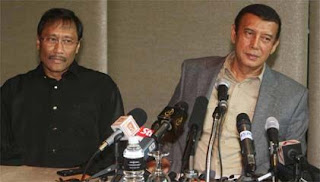 Datuk T is known. Two of them was initially revealed by Member of Parliament for Sg Petani, Johari Abdul.

PKR MP for Sungai Petani, Johari Abdul was invited by Shuib. He acknowledged it to be Anwar but change his stance in public to turn into political offense.

In the meanwhile, read the news on The Star below, who will be getting the one-up on the sex video expose.

Rahim told this to reporters at a press conference here on Wednesday.

Rahim, however, refused to identify the man in the video but hinted “this man may end up being PM”.

He went to say that the man had once asked him to step down for the nation's sake, when he (Rahim) was implicated (but later cleared) of an alleged sex scandal

"The man asked me to step down then, saying I was a liablity. I was told to go (as Malacca CM) although I was never found guilty," he added.

Rahim said that it was now up to the Government to set a Royal Commission of Inquiry to investigate the authenticity of the video.

He said the members of the RCI should comprise people from various quarters and include Perkasa and Kita president Datuk Zaid Ibrahim.

“We want NGOs and also media to sit in the RCI. Let everyone see the truth. All political parties - both Government and Opposition - can also be in the RCI," he added.

Meanwhile, Shazryl told the press conference that they did not go to the police over the sex video as they did not want the issue to be spun into a conspiracy theory.

All looks fair on the RCI.

By the way, Rahim, as most of us know is the former CM of Melaka that resigned following controversy involving teenage girl.

He was part of Anwar's Wawasan Team that toppled the late Tun Ghaffar Baba and supporters Tan Sri Sanusi Junid and Tun Abdullah Ahmad Badawi in a blietzkrieg UMNO election in 1994.

Dato Shazryl Eskay Abdullah is a physiotherapist turned businessman. He was working with the American Football team, Dallas Cowboy before being invited back by Tan Sri Elyas Omar to be physiotherapist for our badminton team.

Believed to be an old boy of MCKK, he was closed with Anwar. Many believed, when he was Consulate for Thai Government in Pulau Langkawi, he helped provide safe passage for another MCKK collegian, Raja Petra Kamaruddin's escape.

Shazryl profession as physiotheraphy acquint him with royalties, celebrities and politicians, including Tun Dr Mahathir. With Mahathir support, he established a feedlot business for lamb in Pulau Langkawi. 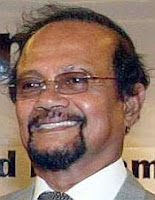 Dato Shuib Lazim is the current Treasurer of Perkasa.

The close political associate of Tun Daim Zainuddin was a former Division Head of UMNO Sungai Petani and was a former member of the Dewan Negara carrying a title Senator.

He is father-in-law to Rural Development Minister, Dato Shafie Apdal and also uncle to current MP for Sungai Petsani from PKR, Johari Abdul.

Rahim revealed that Johari was invited by his uncle, Shuib and one Dato Eskay to view and they claimed Johari acknowledged the person in the video as Anwar.

However, Johari has turned his statement around and the Star reported him on a political attack mode to associate Rahim with the first sodomy case against Anwar. Read below:

PETALING JAYA: PKR has gone on the offensive and identified two men as being behind the sex video that has hogged the headlines the past few days.

Sungai Petani MP Datuk Johari Abdul claimed on Wednesday that the two were a former top Barisan Nasional state leader and a businessman.

He also told a press conference at the PKR headquarters here that “no way Anwar (Ibrahim) was the man in the video”.

Johari said he watched the video on Monday afternoon at Flamingo Hotel here together with the two men.

He alleged he was invited to view the video as a move to get him and five other PKR MPs to quit the party.

“I believe they (the two men) could be the ones behind the video," he added.

Johari alleged that the former Barisan state leader was also "involved in the sodomy allegations against Anwar in 1998".

"The modus operandi used then is being repeated this time.

"Also, what the two men told me about the sex video matches closely Datuk T's statements thus far on the matter," he added.

Anwar has denied he is the man in the 22-minute video. He claimed it was doctored and blamed it on the Barisan government.

The Opposition Leader lodged a police report against Datuk T on Tuesday.

Datuk T gave the politician and his wife one week to quit politics and threatened to make the video public through some NGOs if they failed to do so.

Trying as best to salvage what little they could save.

If things are not hot enough, Ummi Hafilda claimed there are more such sex video tapes.

‘There are 18 videos involving politician’

She claimed that the videos show the politician having sex with different partners including prostitutes and men.

“I knew about these videos 13 years ago. I know of an individual having all the videos and I hope that the person will expose them all to show the true colours of the politician,” she said. 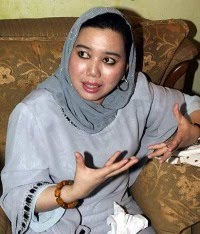 Disappointed: Umi Hafilda speaking to reporters at a house in Taman Wira, Alor Setar after her ceramah was cancelled by police.

“I knew who was in the 18 videos but maybe at that time it was not suitable to expose the videos, but now I think it is the right time,” she said.

She said she would make more exposures on the politician and was waiting for the right moment to do so.

“I had only exposed 40% of what I have and I have more horrific evidence that I will expose either in court or in public,” she claimed.

Umi Hafilda said she would travel around the country to give ceramah as she felt it was her duty to expose wrongdoings.

We've heard of rumours saying Dato Nalla still have some, kept abroad. But let's end all this and call for a Royal Commission of Inquiry.

In the meanwhile, let us not lose focus on Dato T.

With two out of three have links with UMNO, it would typically be spun as conspiracy. But they are mere messengers of the message that a man without moral have no right to be Prime Minister. Read Bigdogdotcom here.

Isn't Dr Mahathir right to sack him from his post as Deputy Prime Minister and Cabinet member? Oppps ... and it was UMNO Supreme Council that sacked him from his UMNO Deputy President post and membership.

Anyone with a copy of the video, do leave your contact number for any chance of viewing. Heard the person allegedly to be Anwar was in his elements. Two shots in 20 minutes and still standing tall wrapped in a white towel.

Usually it was always Lim Kit Siang the first person to ask for RCI.

how come this time Rahim Tamby chik beats him.

Why do need a Royal Commission and drag in DYMM Yang Di pertuan Agung.That is too high an office to deal with this subject. The law in there and it must be used to its fullest extent before we talk about a Royal Commisssion.

Rahim Thamby Chik credibility is questionable in cases involving sex. The argument use a thief to catch a thief does not hold water all the time.

But it does confuse the issue of Anwar's character in the minds of the public at large. Sort of, never mind what they say as long as they say something.

Now that the 3 exhibits on the DNA matter have been allowed by the Court, this video, Anwarish in character and actor or not, does build up public anxiety and disgust on the man's character some more.

Stupid Dato T, K, Y or whatever, I like it. Because I simply don't like the bloke. I don't want him become PM, ever. Jahanam negara dibuatnya.

Not sure if I pressed the publish button earlier. Pls disregard this one if it appears twice:

seriously.. is anwar worth of a RCI? i'll be dissapointed if RCI is formed by the government using taxpayers money. he's not worth even a cent of my money.

Can you not include Ummi Hafilda in the story? Just don't give her any air time please. I think she's such an opportunist and a liar. If you have evidence to incriminate a person who you seem to hate so much, wouldn't it make sense that you use it? Why keep it? Self-enjoyment? Souvenir? Pardon my language, but her there-are-18-other-sex-videos is crap. If UMNO seriously wants to revamp itself, they should disassociate itself with people like UMMI and RTC.