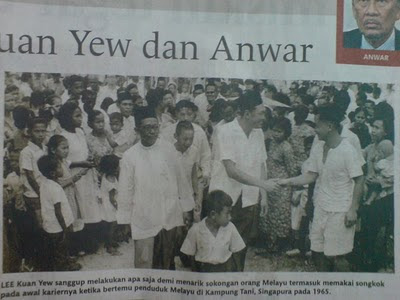 If Lee Kuan Yew, who recently said the Malays should not be too Islamic, can wear a songkok to win the Malay votes, what is to stop a man dubbed Chameleon by The Economists magazine from changing his colour in the desperate attempt to save his political existence?

Some politicians will do anything to survive. Some will cheat, lie, steal, and even murder to avoid from seeing their career end. What more for those that will end their career in shame.

How long can he play the sentiment game?

His cards can be read and his move can be pre-empted. The truth will catch up eventually. With just a 'bomb', him and his whole machinery can be demolished and destroyed.

There was a lesson this blogger got from his late sifu. Never repeat the same trick twice. The pepper spray incident on Tun Dr Mahathir at Kota Baru airport in 2006 was a lesson that should never to be forgotten

Another surprise and Anwar and the whole Pakatan Rakyat machinery will not survive. They will be dumbfounded and stunt. His ground is not solid but as weak and unstable as the coastal Sarawak peat soil. His much weakened troops from the casualty of saving "Private" Azmin will freeze and crumble.

He thinks that sentiment had return with some 7-9,000 attendees to the special prayers and political rally at Melawati Stadium, Shah Alam last night. And he liked to believe that since the police stopped a Pakatan Rakyat event for holding a public rally without permit, it has created curiousity from the people.

That is only fair on the people to hear the other side of the story. The political leaders could not make any statements for it will be wrongly perceived to affirm UMNO conspiracy allegations by Anwar. Government official responses are the usual sanitised answers and lines.

Anwar had lined up interesting answers to continue his psywar attack. He has got Johari Abdul to spin six reasons why it was not him; shoulders, leg muscles, stomach, etc.

However, Johari admitted at a Permatang Pauh rally that it looked like Anwar Ibrahim.

Johari had admitted in front of witnesses in the viewing room that it was Anwar.

He thinks he could get away playing his words against others' words.

He spoke about supporting Anwar against this new slander, in which he himself has yet to see the video and verify.

If there is no religous twist, it is not PAS. Tuan Ibrahim said such slander existed during the time of the prophet but it is worst these days. Off course, he did not touched on the slander against Najib for having a tryst and the murder of Mogolian Altantunya, if it is not from Anwar and some invisible hands within UMNO

He went further to say that slander is the act of those who has no faith and could not differentiate between dosa (sin) and pahala (reward).

Tuan Ibrahim said his doubt of the video was based on Johari Abdul's description.

It seems Chegu Bad too changed his public statement from his private statement for politics sake. UMNO Reform, Anuar Mohd Nor that came to view with Chegu Bard could not be contacted for comment.

Tuan Ibrahim went further to say, any allegations need to be investigated first before make it public. The method is questionable but isn't this what the trio is doing?

Having heard of Tuan Ibrahim's land dealing in the recent Kerdau by-election, this once respectable former ITM lecturer has now sink in the same shithole as any politicians. More so, with words that he is considering to run for Deputy President against Dato Husam Musa and Nasaruddin.

For the rest of PAS, President, Dato Seri Haji Hadi Awang, who will be pitted to be challenged by PAS Mursyidul Am, Dato Nik Aziz Nik Mat, seemed to be seeking a lifeline with the pro-Anwar Erdogan faction by giving support to Anwar.

Other Vice Presidents, Salahuddin Ayub and Dato Mahfuz Omar, are taking a politically pragmatic position to lean with the wind. 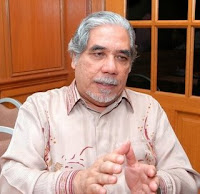 This is unlike the position taken by PAS Secretary General, Chegu Pa.

He, like most PAS grassroot including those that attended last night's special prayers and rally, would rather verify the tape before assuming any position.

They maybe aware that Anwar have not answered for the gap in his Twitter and the missing Omega watch.

Anwar will view the event at Stadium Melawati positively. He would like the see the message reach the rural areas.

He will rely on Saifuddin, Chegu Bad and their new ceramah star, Johari Abdul to spread the message across the Peninsular Malaysia.

Predictably, Anwar would request that the video from last night mass turnout be screened for their nationwide speaking tour.

Their spin would be to link the current happening with the illegal but admissable DNA collected from samples obtained in the police lock-up and the 1998 incident by linking to recent letters from former police officer, Dato Mohd. Zin (Read here. This blogger have some unfinish issues with him).

The solution to all these brand of politics, which Anwar accused UMNO of practising but he is the real master, he wish to sell is his 2-year national bankruptsy plan, the Buku Jingga proposal.

Through this critical and challenging times, Anwar will project a different self.

He will project himself as someone good and holy to make it impossible for anyone to suspect he is ever involved in such immoral acts such as sodomy and prostitution. 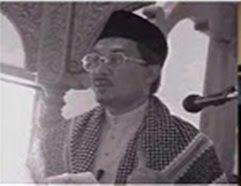 Part of the public relation act is to potray himself as a family man, loving husband, and pious person. More images of him attending group prayers, giving out donations, visiting community events, kissing babies, etc. will be seen.

Anwar will give a Friday sermon if he has too.

Hopefully for Anwar, the momentum will continue. The crowd for an event like last night's will swell to the 20-30,000 attendance it is used to.

Anwar can go on with his Oscar winning act, but how long can such a perception play last? 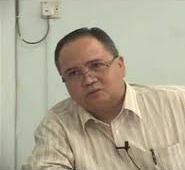 As one former PKR youth leader, Zaid Mohd Arip said over lunch to this blogger, Anwar will eventually have to face up to three stark realities.

One: The reality of his DNA in the police lock-up, which he admitted the three objects was his, matches that in sample Male Y.

Second: He will be imprisoned, if found guilty, for his sodomy act with Saiful Bahri.

Three: The current sex video, if not other sex videos still in existence still floating around, may prove Dr Mahathir to be right. Anwar is an immoral person unfit to be the leader of this nation.

Thus far, Zahid said Anwar has refused to answer for the two hours gap in his Twitter and the missing Omega watch.

He anticipate that Anwar will introduce some of his relatives and friends to claim alibi to answer for the two hours he was missing from his Twitter. Rafizi Ramli's excuse of Facebook presence was squashed by Dr Novandri's highlight of the Daylight Savings Time of North America.

As it is, Anwar had introduced a former special branch officer, Haji Kudus to substantiate his allegation for accusing Special Branch involvement in the recent sex video tape.

The problem with that line is that the former Deputy Branch Head of PKR Kuala Selangor left the service before reformasi and participated in the reformasi of 1998. How is he to claim that the recent sex video tape is planted by Special Branch?

In short, all one need to remember is TV3's report of Dato Shazryl Eskay when they first came forward. Eskay said, he did not know if there are other copies of the video available.

A pictures tell a thousand stories. A video tells a million words.

Hmmm ... that should be a scary thought for Anwar.

That is what is already known out there. There could be other possibilities outside Anwar and others' knowledge.

With just one easy shot, that is enough to stunt, frustrate and even weaken Pakatan political machinery in mid-air of a revival.

Yeah love reading yr blog but sometimes I think you need an editor.

These are some other award winning reasons you forgot to mention.

1. Male Y took some Mamakooti Rojak and spent 17 minutes in the loo.

2. He spent the rest of the two hours with his doctor ( Fake cert attached)

3. He was at home watching the late night news. (TV set as evidence)

4. Some UMNO members stole his watch.

5. He will claim that the woman is local, not foreign as speculated.

But what he does not know is that Lanson Place has CCTV from the Security entrance right to the bed he slept on.

But I find x-pkr.blogspot.com latest posting on this video issue is VERY interesting.

He can fool (some)man but he can never fool God.As much as I can't wait for him to receive his cum-uppance, I have faith that it will come. When? Only at Allah's time, will & reason.

Remember the boomerang law? What you throw out, MUST come back to you at double ferocity. In short, we reap what we sow.

So in this pyschopath's case -- yes, he can't be a neurotic but a psychotic - all the evil will come back to him at a far greater magnitude.

He ( & those in cohorts with him including those who wilfully abuse God's name like PAS) will eventually have his ( & their) own Richter 10 Quake & 100 foot tsunami. For that's how life on earth is arranged by Allah. Kalau tak begini, dah lama binasa dunia jika mana-mana binatang bertopengkan manusia ini bebas bermaharajalela.

I seriously need one. Tell me if you have anyone.

Is one with the COW video coming out?